Intel Laminar RM1 (and the path to it)

Coolers supplied with processors are treated with prejudice. Often they don’t even get a chance and are immediately replaced by something “better”. The new Intel Laminar RM1 cooler is improved in many ways and to give you the best image of it, we have compared it both with its predecessor and with the popular SilentiumPC Fera 5 cooler. Tests on a CPU with limited power draw or at full power? Both!

Intel Laminar RM1 (and the path to it)

Poor performance or “poor” looks, and for many, the combination of both of these things makes box coolers an unattractive piece of hardware that usually ends up unused in a drawer somewhere. In this article, we will seek answers as to whether it is justified and more importantly, if the same fate awaits the Intel Laminar RM1. The new generation of Intel coolers has attracted a lot of attention mainly because they are different from the previous ones right from the first glance. But that’s mainly visually, because functionally the different designs are also used by older coolers, although this fact is often overlooked.

However, the photo below illustrates three different heatsinks that Intel has shipped with their CPUs over time. Some had simple fins, others split towards the ends to increase the area in contact with air. The fork-shaped ones were also both straight and curved. After a slight bend, the total area could be slightly larger again.

This design (curved fins with two ends) was also used in the last generation of heatsinks, which is still shipped with Intel Rocket Lake and Comet Lake processors. With this generation of heatsinks, Intel tried to remove a kind of visual handicap. Instead of “raw” aluminum, it now has black anodizing, and the aesthetically more appealing fan sticker, which color-matches better with the rest of the cooler, contains only a large Intel logo.

However, all these are only minor modifications that did not require significant intervention in the established structural design. Bigger changes come with Alder Lake CPU coolers. There are different coolers that come with different classes of processors. The simplest is for Celerons and Pentiums (Laminar RS1) and the most complex or therefore the largest is naturally for Core i9 (Laminar RH1). However, you’ll probably most often encounter the Laminar RM1, which ships with Core i3, Core i5, and Core i7 processors. And it should be added that it is only included in the package of models with a closed multiplier, which have a TDP of up to 65 W.

The Laminar RM1 has more than twice the weight (347 grams) of its predecessor at the same height (47 mm). And it certainly doesn’t gain this by seemingly significantly larger “plastic plating”. Even older coolers have a crown, a plastic holder with a fan, and this part (holder + fan) is only 5 grams heavier. The weight of the Laminar RM1 is primarily increased by the full copper core (on the previous cooler it was empty – a tray on the inside). Its base is circular again, but with 7 mm larger diameter (35 mm), which means better contact with the CPU heat spreader. However, there is also a smaller core in the axis of all Alder Lake processor chips (even variants with a larger core area of 209 mm2) on older coolers. 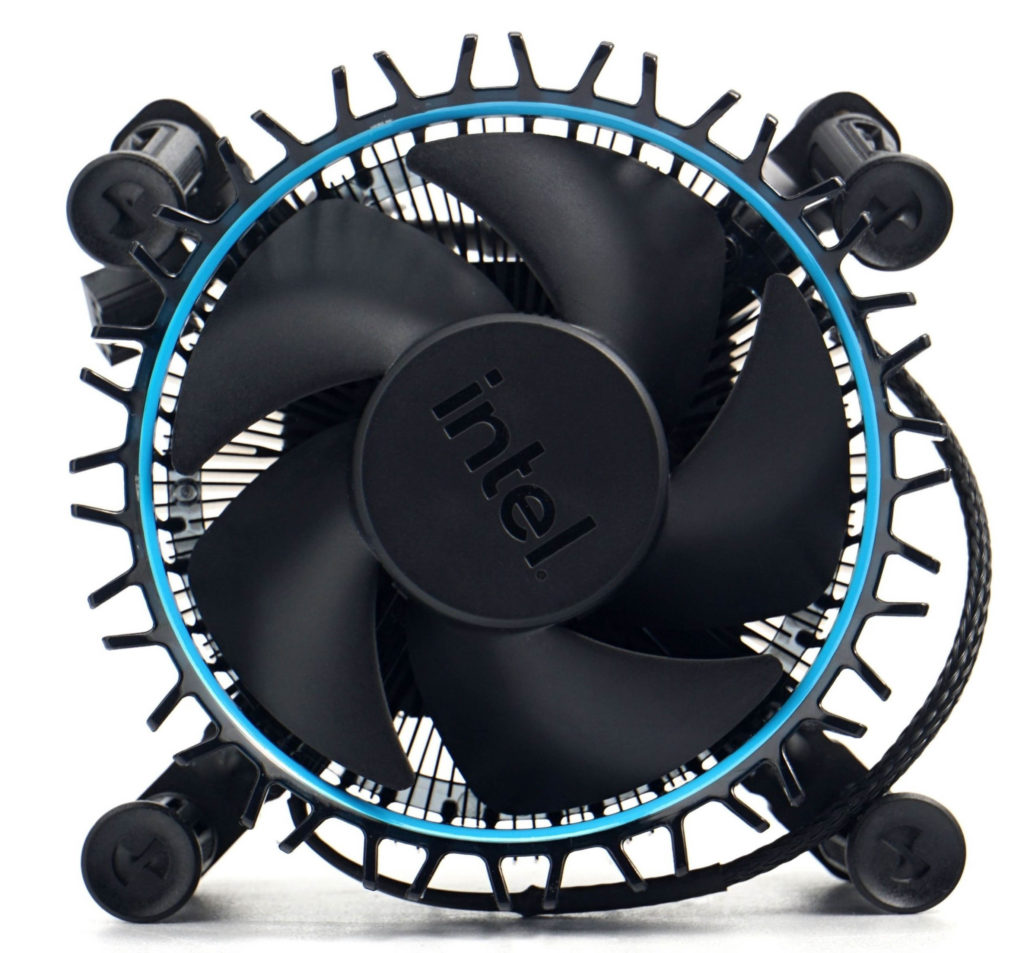 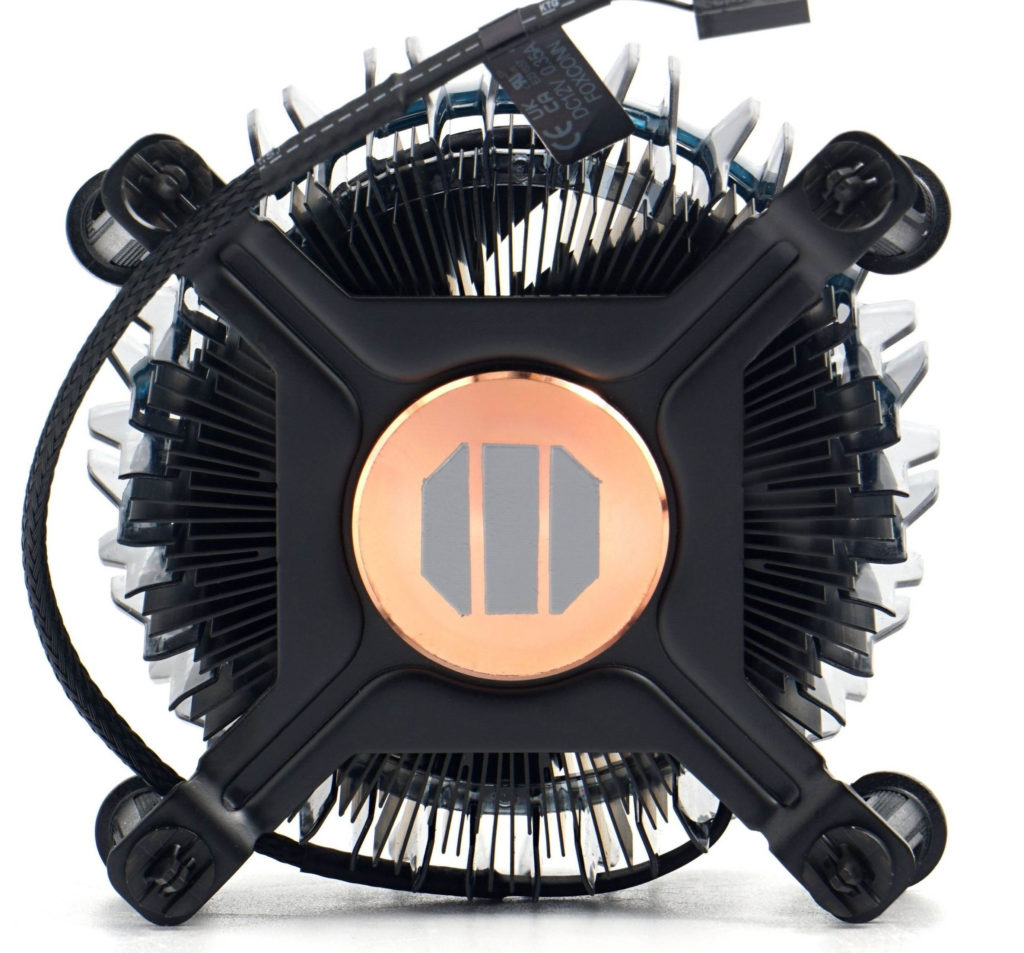 And then there’s the steel cross with push-pins. These were previously part of the plastic fan mount. The finning area itself won’t be that much bigger. What’s remarkable is that they alternate between different types of fins (smaller, larger forks, simple straight blades), which are all straight again. The fan format has remained at 80 mm, but there are fewer blades (5) than there used to be (7), but there is significantly more surface area per blade. The efficiency of the new fan may therefore be higher. 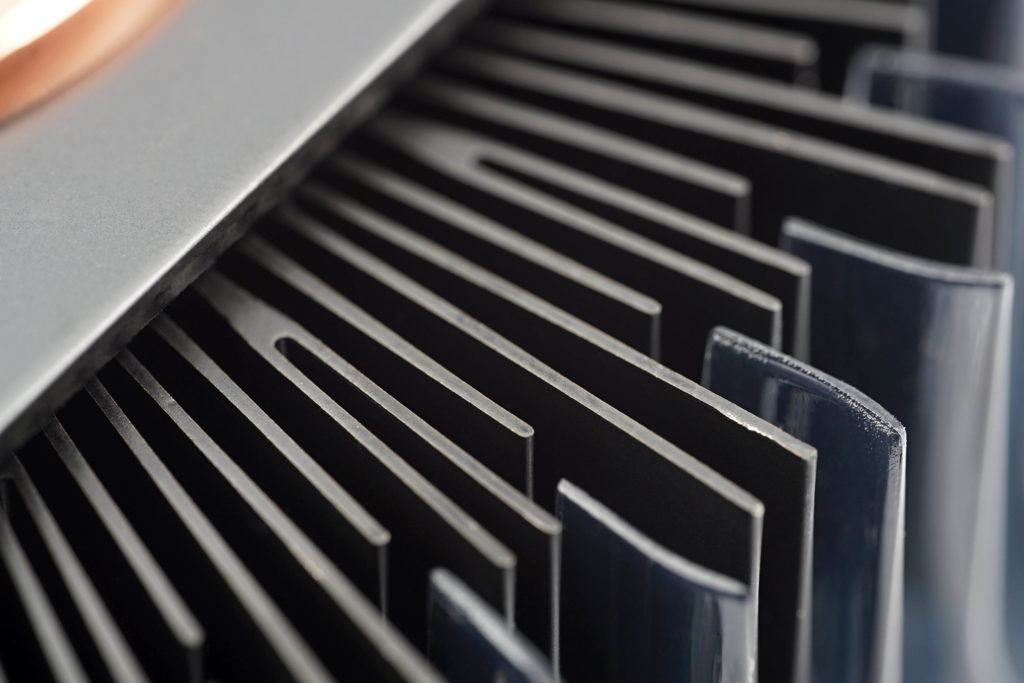 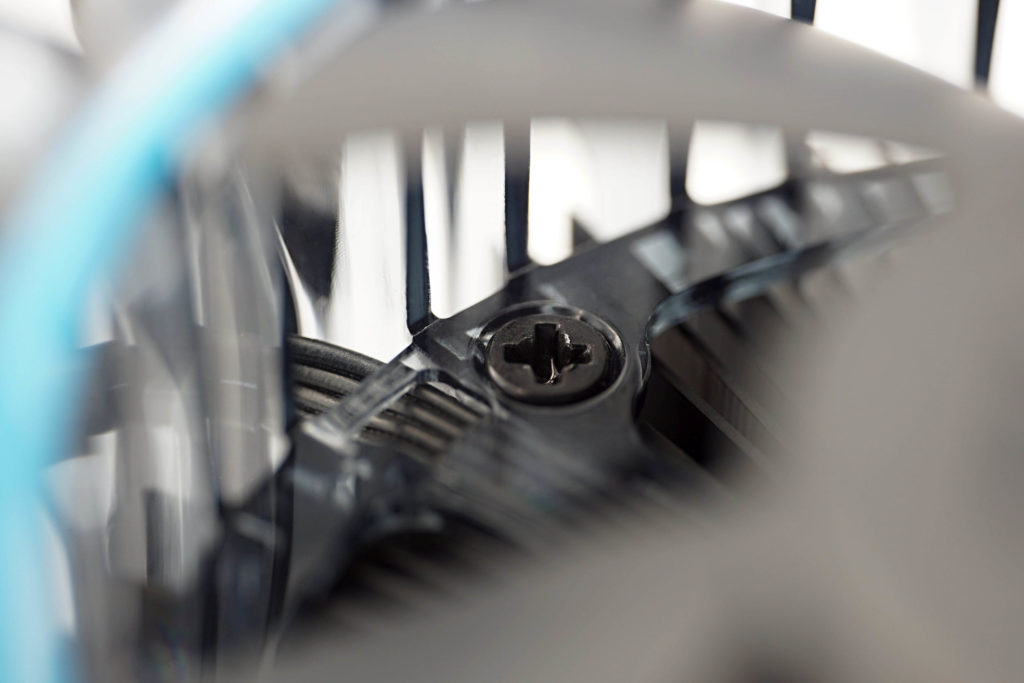 You already know the braided power cable from the older cooler, but what you don’t know from this one is the convenience of finally working with push-pins. Instead of pushing with your finger while unlocking, you can use a flathead screwdriver. The push-pins now have a handy lock on the headers.

But how do we want to compare the new box cooler with an old one when there is a difference in the spacing of the mounting holes? Quite simply. The tests, of course, are run on the Intel LGA 1700 platform and in the case of the older cooler, the push-pins had to be removed and instead we pushed through standard screws with smaller threads than the holes in the feet for the push-pins. This small clearance makes it easy to adjust the spacing a bit larger, from the original 75×75 mm (LGA 115x/1200) to 78×78 mm (LGA 1700).

To achieve the same downforce, we also removed the push-pins on the Laminar RM1 and fitted the screws in order to reach the push-pin level temperatures. We did this by gradually tightening the nuts and testing continuously. Based on this, it is then possible to set the amount of downforce that the push-pins themselves would develop. In addition to this tuning, the push-pins have also been shown to exert such a force on the processor that the PCB of the motherboard is not deformed. It does bend at higher pressures. 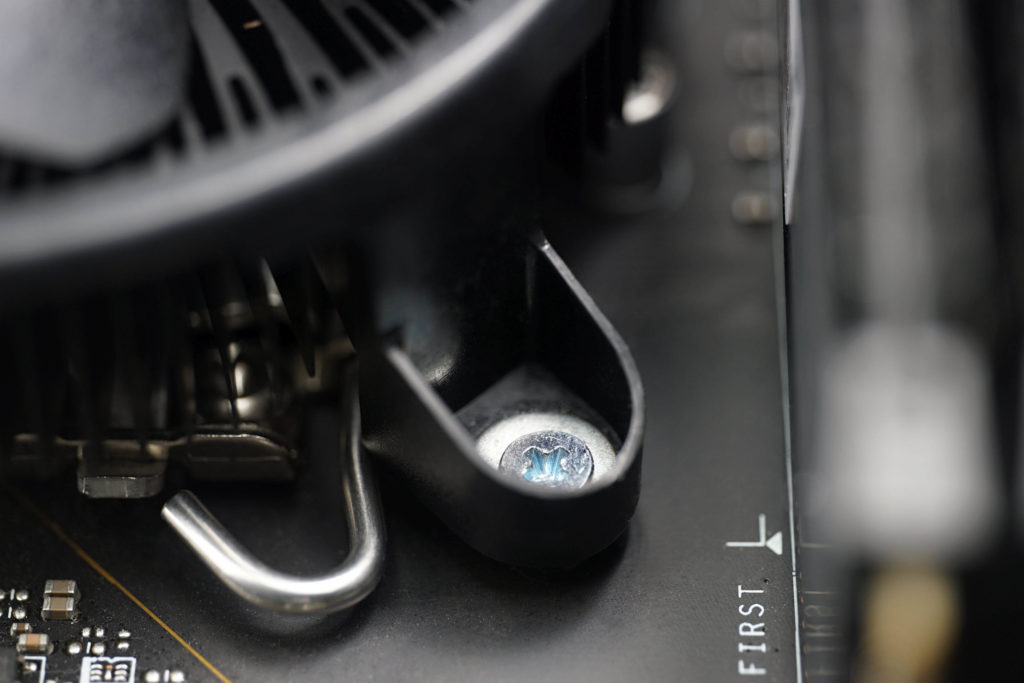 For testing purposes, we used an Intel Core i5-12400 processor. Specifically, the H0 variant (i.e., with a smaller core) so that the results scale well even with Core i3-12100(F) processors, which are always built on a natively 6-core chip. One of the Core i5-12400 modes is capped by TDP at 65 W (this is the power draw of the Core i3-12100/F with no power limits) and the other is unrestricted, roughly 95 W. Stress tests are done in Cinebench R23, and wring practically the maximum out of Alder Lake processors and really hit the 65-watt PL1/TDP limit.

The coolers are tested at maximum power and at lower speeds corresponding to fixed noise levels of 45, 42, 39, 36, 33 and 31 dBA. Noise levels are measured with a Reed R8080 noise meter (with a parabolic collar to increase sensitivity) at a distance of 15 centimetres from the sound source (fan). 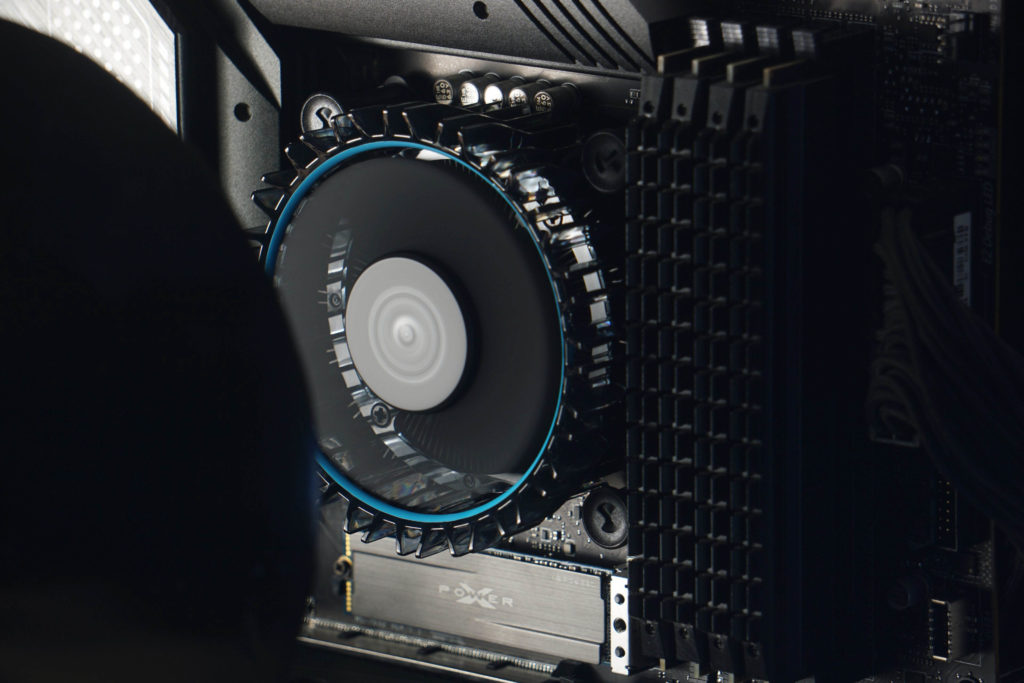 Measurements are done traditionally in a wind tunnel, with two 500-rpm Noctua NF-S12A PWM fans at the intake and an equal number of these fans at the exhaust. The intake air temperature (21–21.1 °C) is constant, properly controlled throughout the testing. In addition to box coolers, the SilentiumPC Fera 5 cooler is also included as a strong (popular) reference point in the comparison, as it tends to be a frequent replacement for weaker Intel solutions.