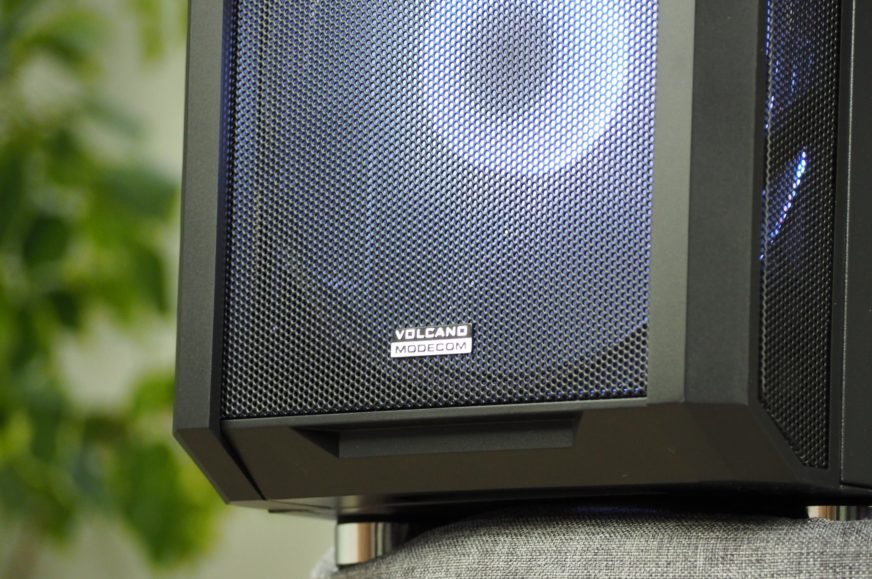 The Amirani ARGB is a larger case, the second in our office to be fitted with oversized 200mm fans. So there will be no shortage of cooler air from the surroundings, although the case has a kind of double filter and the position of the second one is quite unusual. And consider that the remote control is not only used to regulate the lighting as it is usually possible, but also allows for speed control.

In addition to the case packed in a cardboard box with polystyrene filling, you get a bit more than usual in the accessories. For example, you’ll be pleased to find a remote control or an adapter for mounting the graphics card in a vertical position. Also included are screws, single-use pull-tabs, simple manual, and a motherboard buzzer for reporting errors. 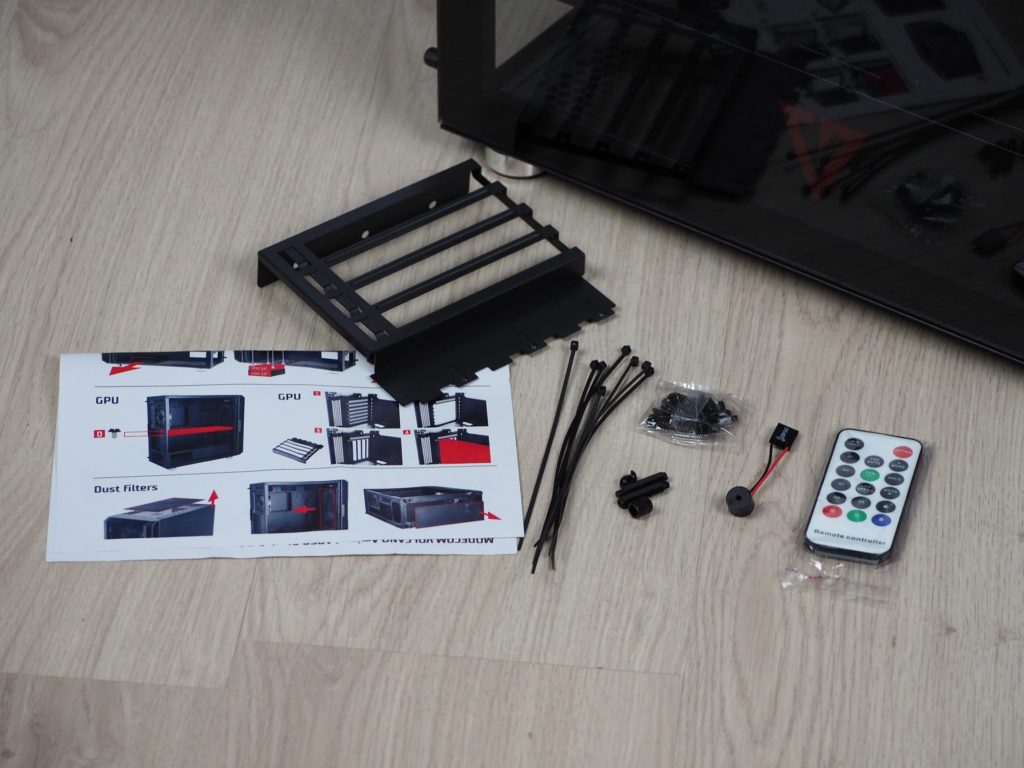 Out of the box, the case looks massive. The left side panel is made of tempered glass. This is anchored in grooves, while it is secured from the back by two screws. These stay in the panel once unscrewed, so you don’t have to worry about losing them. Worse is the actual removal of the glass. There’s nowhere to grab it, so the only option is to “slap” onto it and push it towards the back of the case. This, of course, leaves fingerprints/debris on the glass. 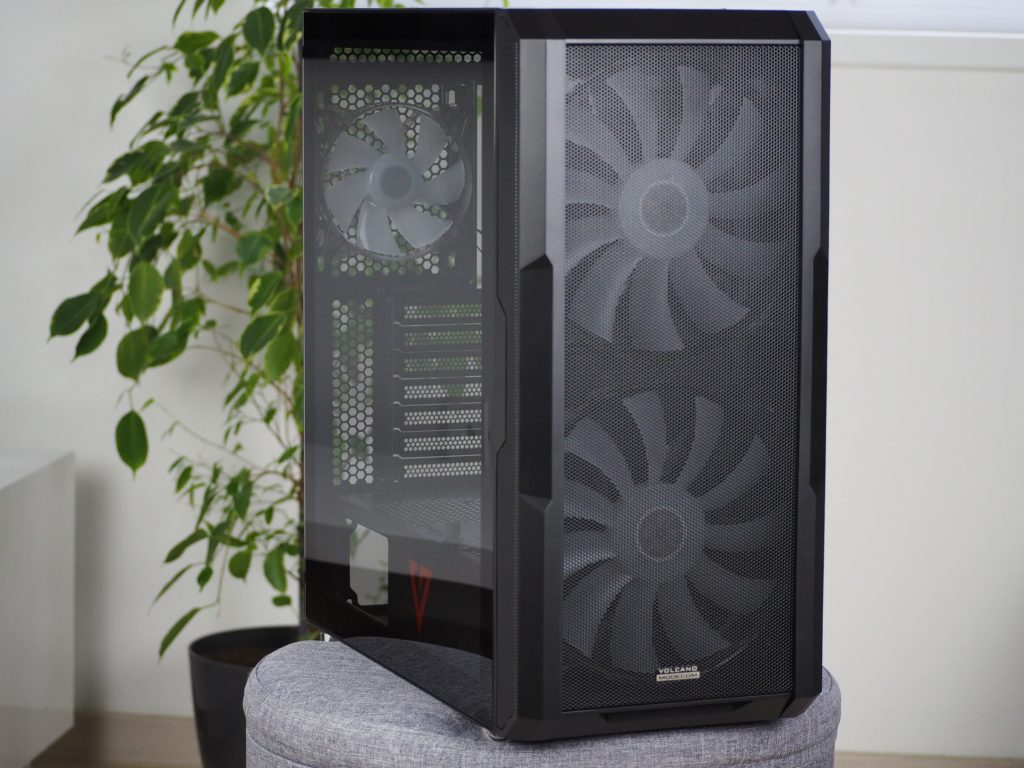 The tempered glass is four millimetres thick. On the inside, it has a slightly protruding foam on top, probably due to the pressure and the smaller amount of vibration transmitted. 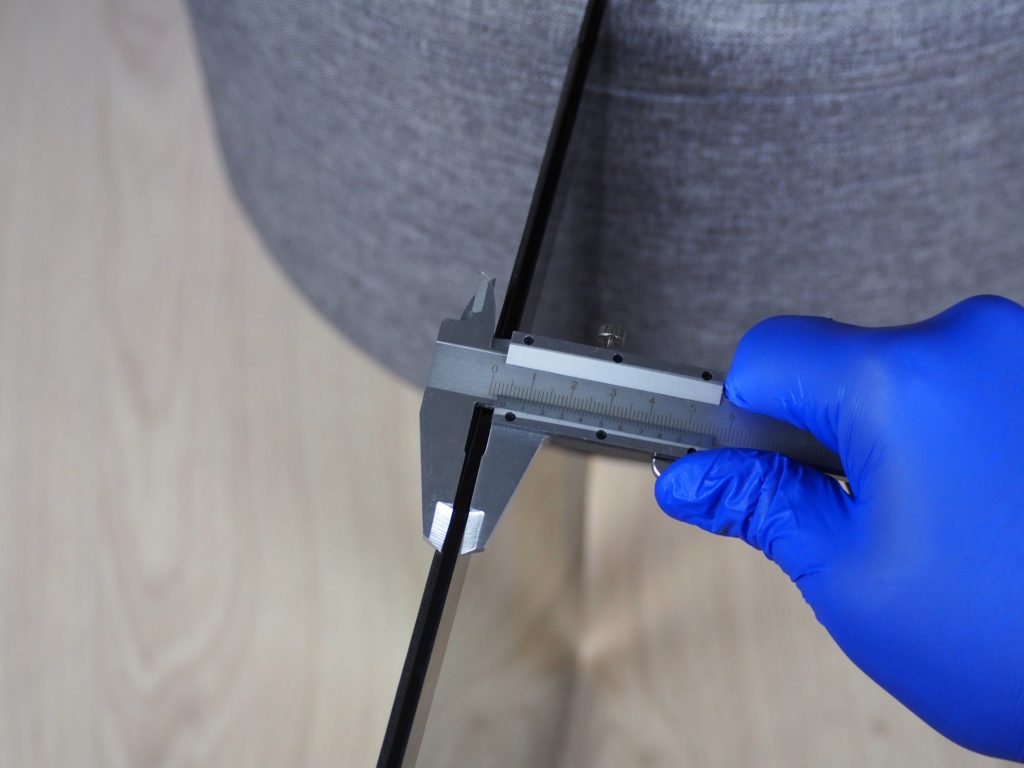 The entire front panel is perforated on both the front and sides. The perforations are 1.3 mm wide. What I miss most about this perforation is the fine dust filter, but we’ve had cases like the Lian Li Lancool II Mesh Performance, which also didn’t use a filter of this type, and in fact none at all. 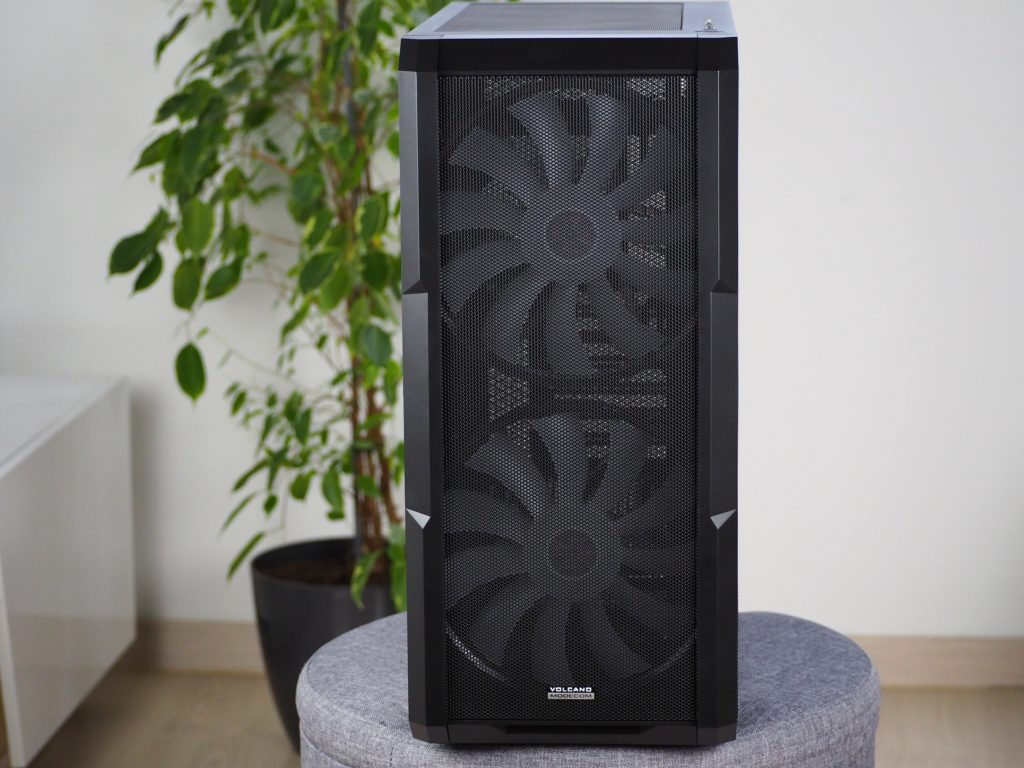 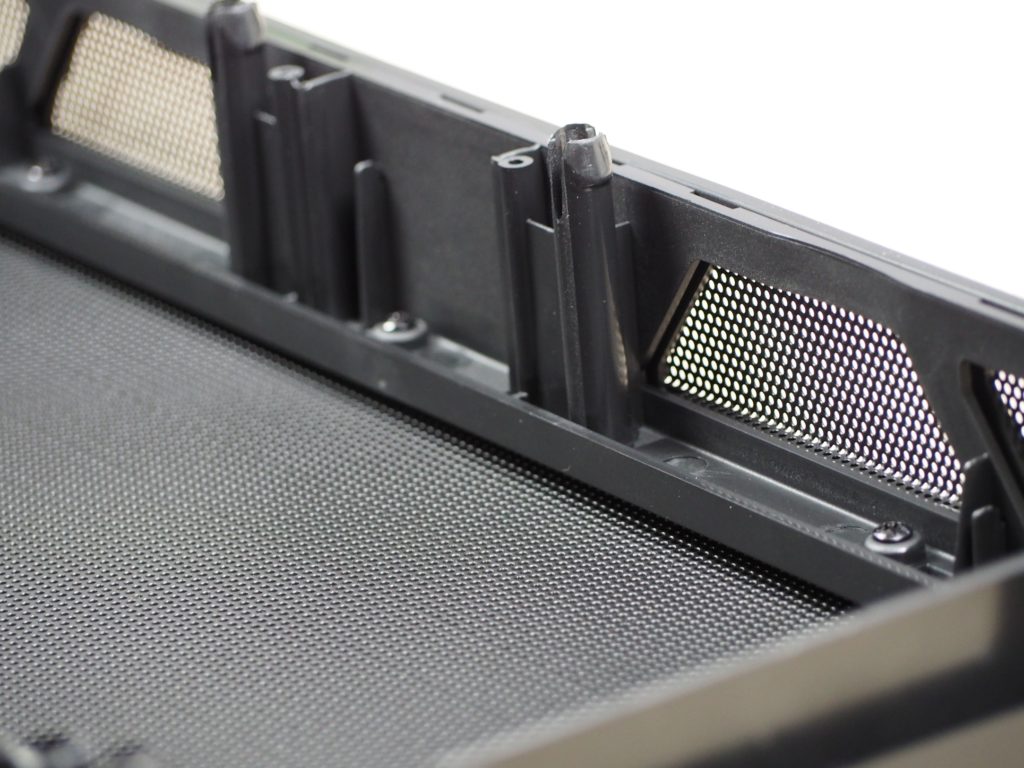 Amirani has fitted a thin filter in an atypical location, on the inside of the case directly behind the fans. That means on the other side as is usually the case when the filter is in front of (and not behind, as it is here) the rotor. It’s strange, but you can’t rule out the possibility that Modecom figured out that it’s more efficient from a dust-capturing standpoint. The fans themselves do get clogged (with dust) sooner, but again, it may not be that critical since there is a metal mesh screen in front of them. Although its efficiency won’t be that amazing, the holes are a bit bigger than on the removable filter (with 0.9 mm holes) behind the fans. The latter is attached, by the way, magnetically. 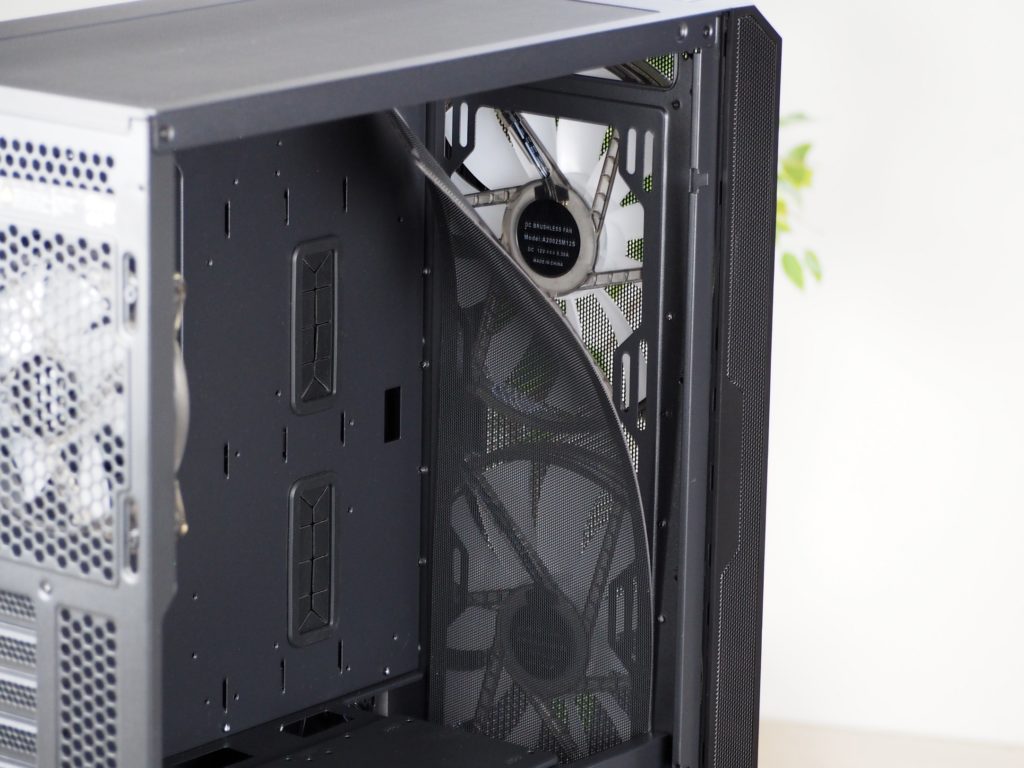 Once the front panel is removed, you can access the fans. There are two 200 mm fans mounted with four screws. I got to the edge of the internet in my search for more specifications, but it led nowhere – if you manage to find anything, be sure to post it in the comments. These are probably OEM fans from some Chinese factory. What we can say for sure, though, is that you have ARGB backlighting available. For someone, that may be the deciding factor.

However, if you don’t like the original fans, you can replace them with two 140 mm or three 120 mm fans. If you have a liquid cooling radiator up to 360 mm, you don’t have to worry about its placement in the case, there’s plenty of room for it in the front. 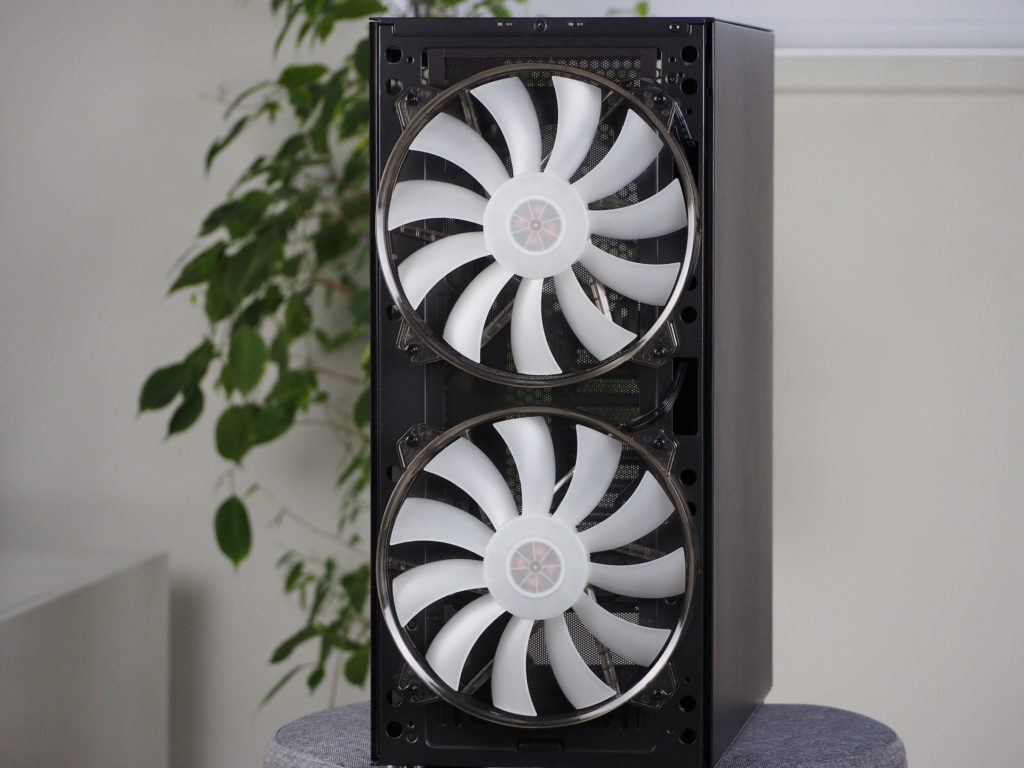 The top of the case has the same filter against larger debris as the fans on the back. This fits into a deeper trough and is held in place by magnets all around. So there is no risk of unwanted sliding out. You can fit two 120 or 140 mm fans on the inside of the ceiling. If you’d prefer a liquid cooling radiator, you can fit up to a 280 mm radiator under the ceiling without restriction. 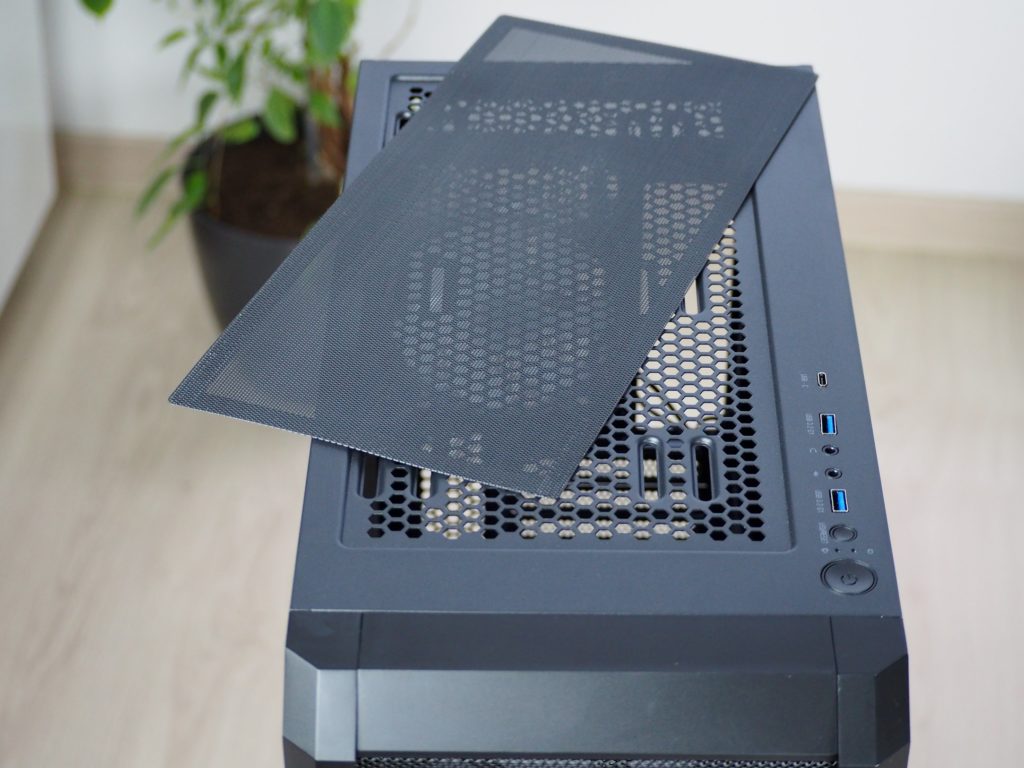 The top I/O panel does not impress but does not disappoint either. There are three USB ports including one Type-C, two 3.5mm jacks, a power button and also a reset or backlight change button, depending on how you plug it in. The power button is comfortable to press, but the one for reset is without tactile response. So you don’t know if you pressed it or not. There are two small LEDs in between. One indicates disk activity and the other indicates power on status. If you plan to have the case somewhere under your desk, you need to be careful not to have them directly under your eyes. They shine quite brightly. 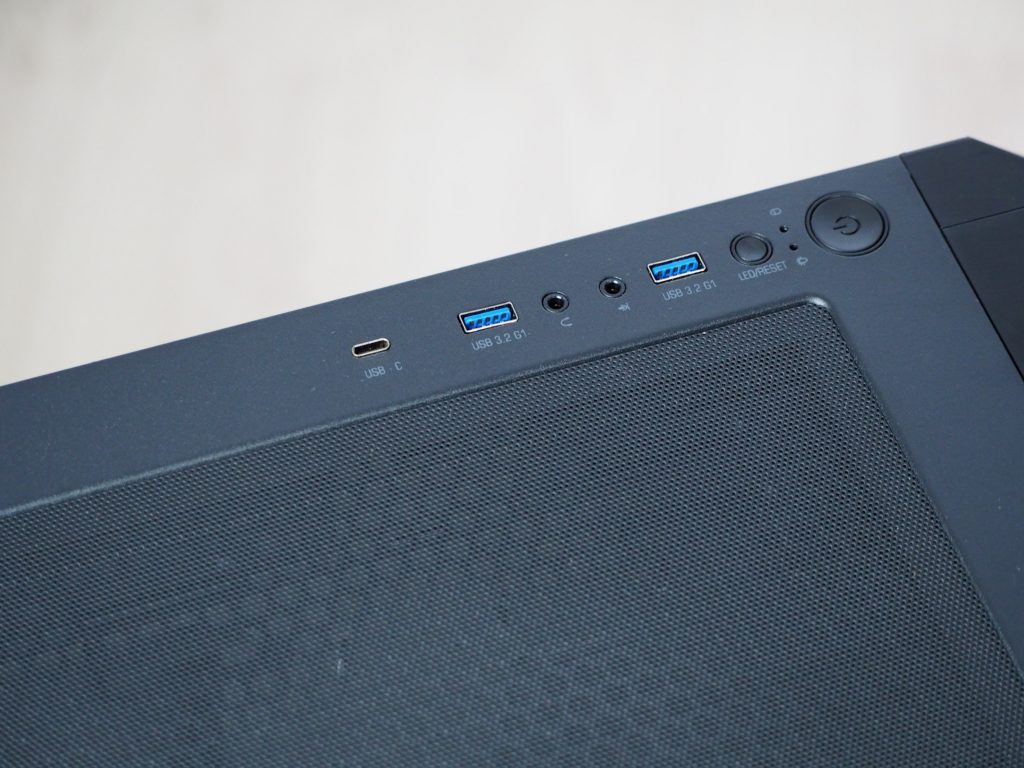 The back of the case reveals the ATX power supply slot at the bottom of the case, which is now standard. Seven covers for PCI Express expansion slots indicate that you can fit an ATX motherboard format into the case. Of course, there must be a hole for the I/O panel of the motherboard and next to it, room for an exhaust fan. Only a 120mm fan will fit here, which is a big difference from the two 200mm fans in the front. Just below the ceiling you can notice the beehive-shaped perforations, which suggests that there will be plenty of clearance between the ceiling and the motherboard. 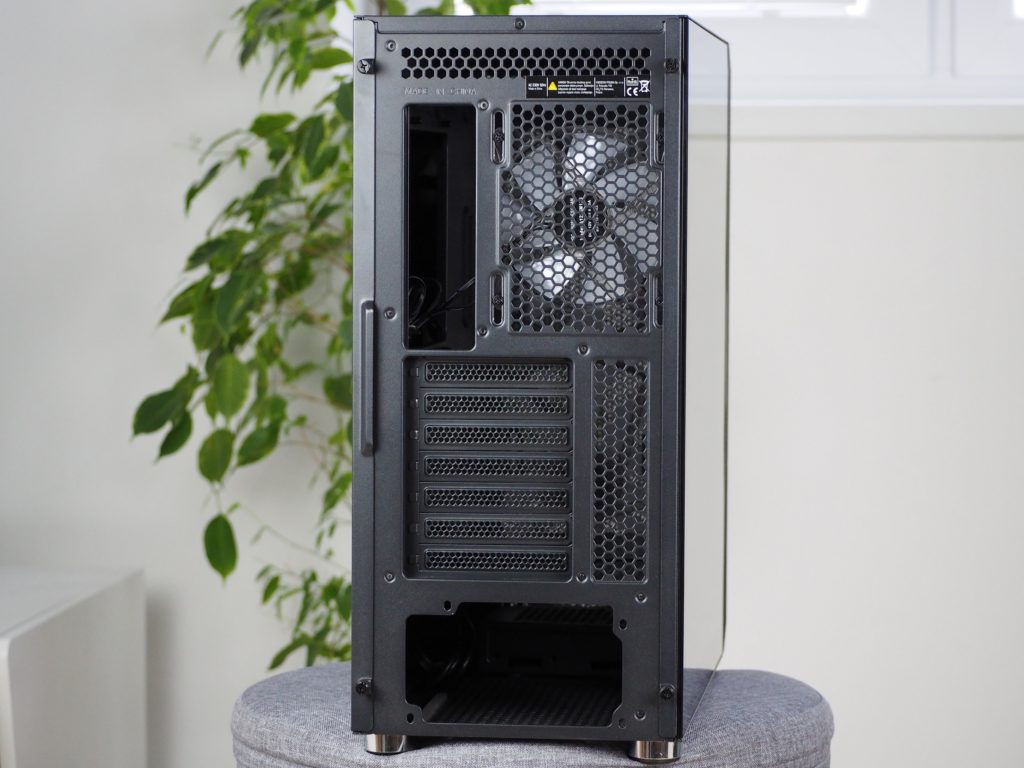 Since the entire bottom of the case is perforated, a filter is attached along its entire length to prevent larger particles of dirt. It is the same on the front of the intake but also on the top of the case, so I would rule out placing the case somewhere on the ground. The handling here is slightly worse than with the previous two filters. It’s attached via eight points to the structure and has to be wiggled when removing/installing it. The silver feet with pads add elegance to the case. I do have one complaint about the pads though. They don’t secure the case very well in place and it slips easily. 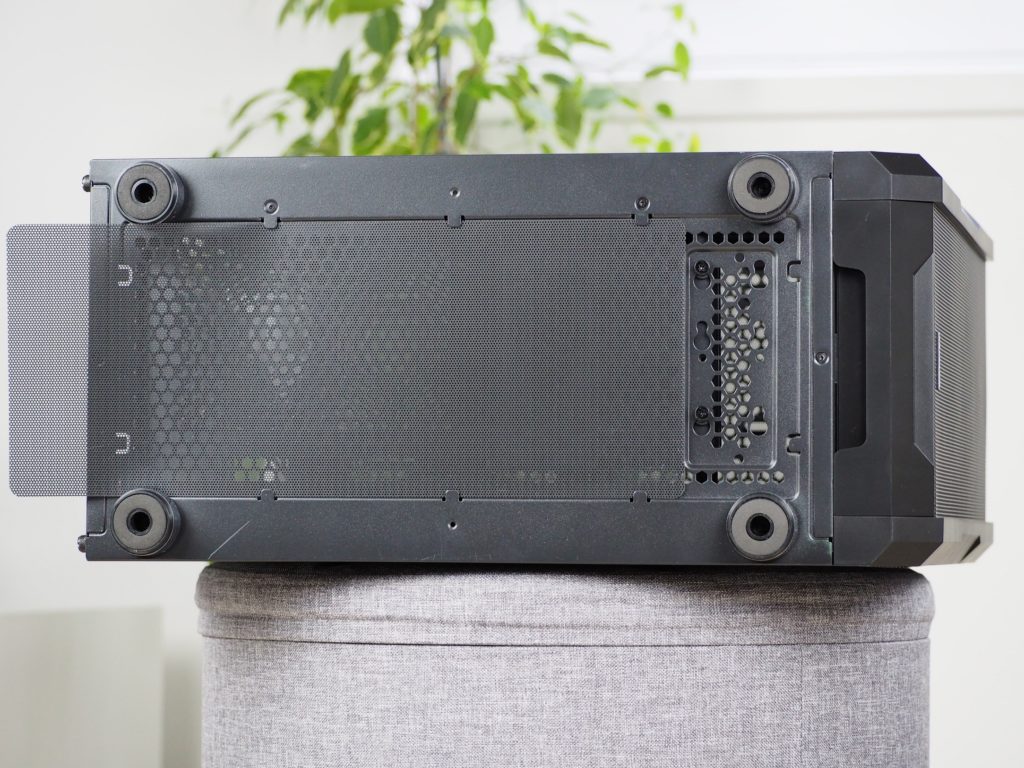