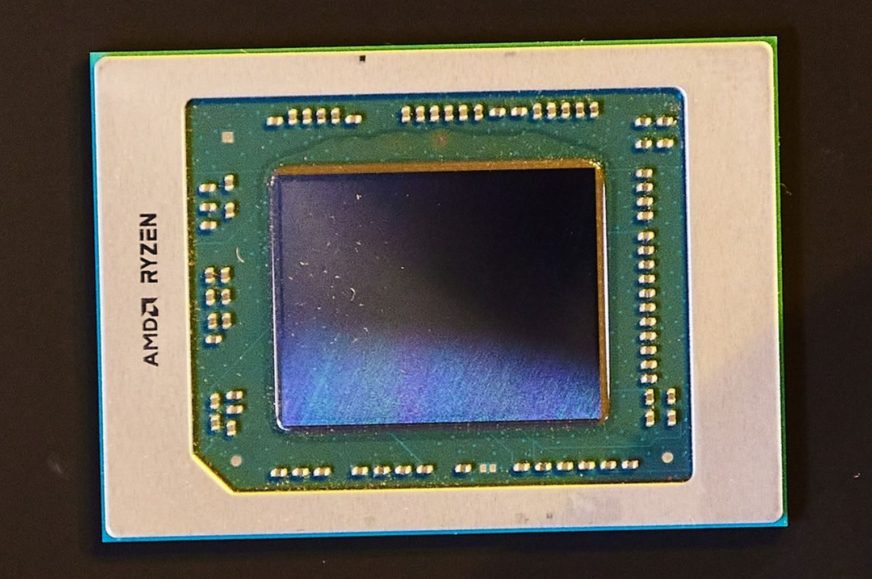 Rembrandt APU with integrated RDNA 2 graphics is coming to notebooks

AMD has been releasing its new laptop CPUs during CES every January, and this year will be no different. The Ryzen 6000 was revealed, AMD’s first 6nm APU that also brings support for DDR5 and LPDDR5 memory. And most importantly, all-new integrated graphics with RDNA 2 architecture that will set a new standard in gaming performance. But these processors also have other new features that Ryzen-based laptops have lacked until now.

The Ryzens 6000 was previously codenamed Rembrandt. These processors are partly based on the “Cezanne” Ryzen 5000 for laptops, partly they are brand new. AMD made a partial update in the previous Cezanne generation: the integrated graphics of the Vega architecture as well as the memory controller and in general the “uncore” part were taken from the previous “Renoir” Ryzen 4000 generation, but the chip got new Zen 3 cores replacing Renoir’s Zen 2.

The now-released “Rembrandt” Ryzen 6000 seems to continue the same strategy of innovating one major part of the processor every year: this time there is new I/O, memory and GPU, while the CPU cores adopt the Zen 3 architecture from Cezanne. Actually, there is a change in fact. Instead of a 7nm process, AMD has used TSMC’s 6nm N6 process, for the first time with EUV technology. This achieves higher frequencies and should hopefully have slightly better power efficiency, hence the “Zen3+” designation for the architecture. 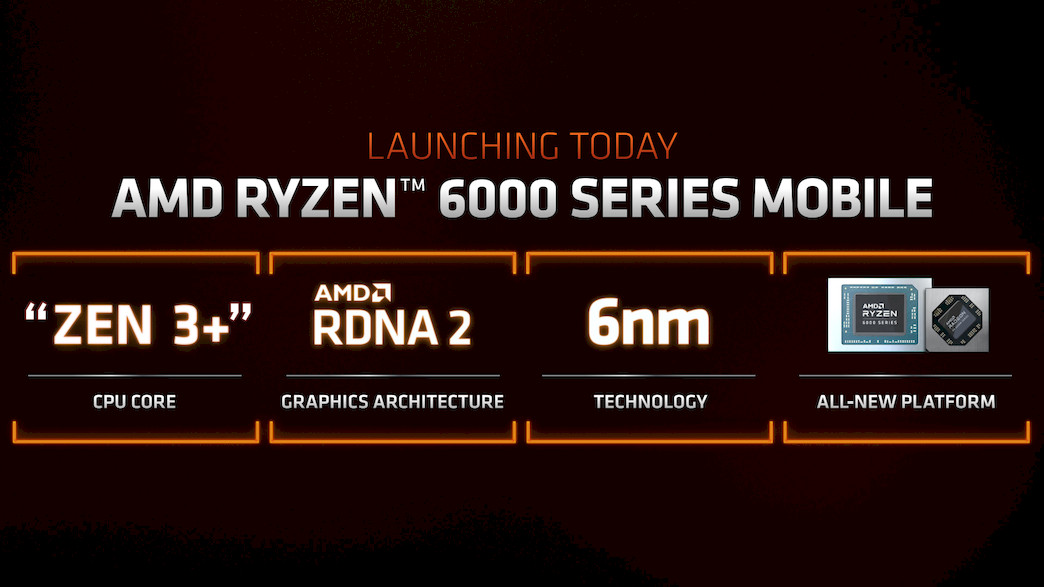 The processor part still has 8 Zen 3(+) cores in one CCX block with 16MB L3 cache. Added to this is a new memory controller that supports 128-bit wide DDR5-5200 (four 32-bit channels) or alternatively LPDDR5-6400. The processor doesn’t support DDR4 or LPDDR4X, so laptops will have to use only the new memory technology and the chip won’t be able to be deployed in AM4 desktop socket form factor. These APUs are expected to arrive on the AM5 desktop platform, but it’s not yet clear when. 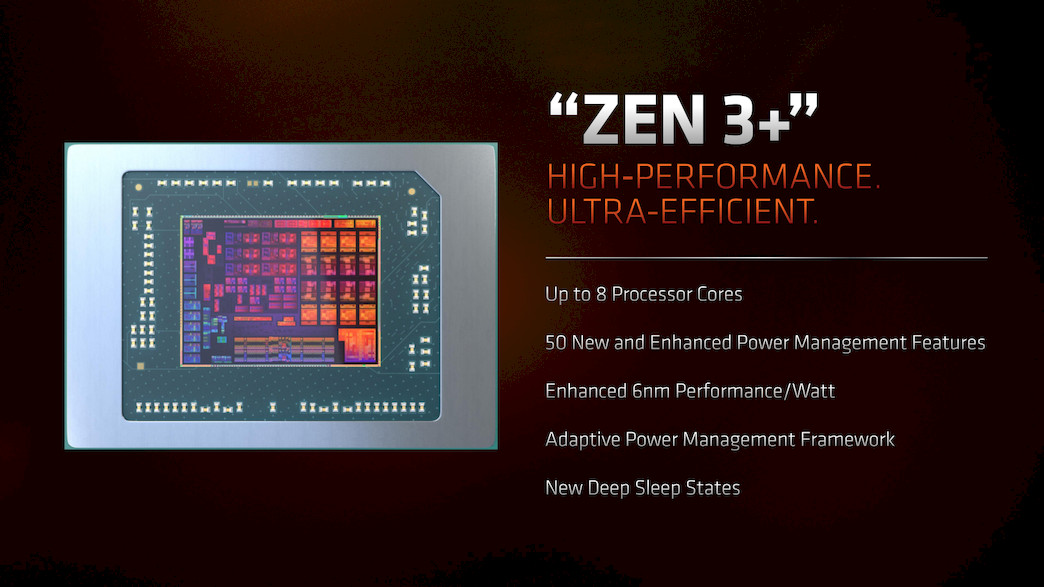 The most powerful iGPU in Ryzen yet, even with ray tracing

The second and probably the main-event news is the new integrated GPU. It uses the RDNA 2 architecture, the same as the Radeon RX 6000, so the integrated GPU will finally be on the same technological level. The integrated version in Rembrandt has 12 CUs, or 768 shaders. 12 Ray Accelerators are also included, so this iGPU supports raytracing effects. 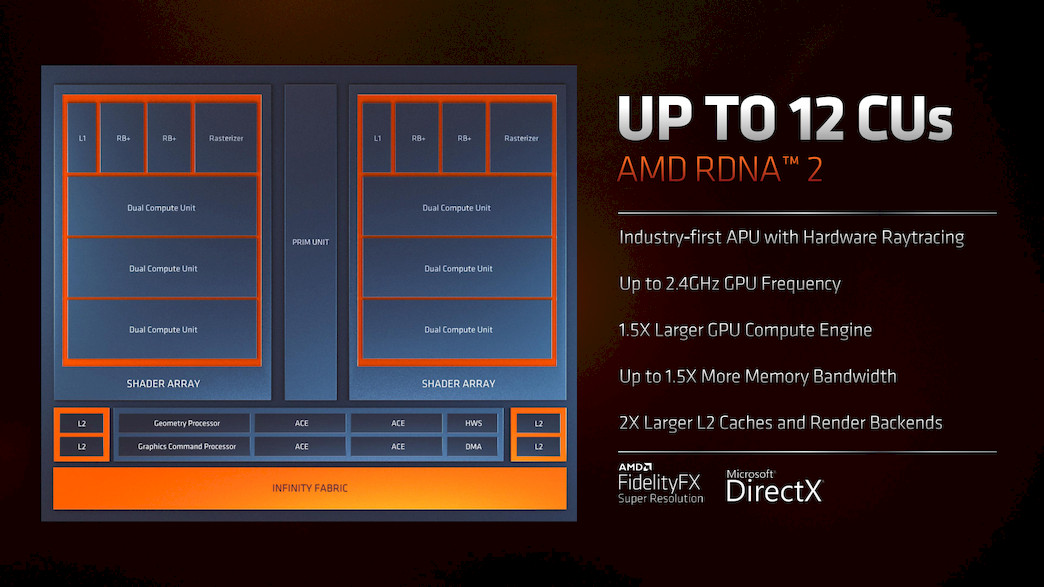 But the new architecture also means twice the number of rasterization units compared to the previous Vega iGPU. Infinity Cache is not included, but at least the L2 cache has been increased, reportedly to twice the size of the previous iGPU (exactly how big it is now is not said however). In addition to the increase in the number of units, this is AMD’s most powerful iGPU yet also thanks to a significant increase in frequency, which in the notebook version will be up to 2400 MHz. AMD states that graphics performance should increase by 80-100 % over the Ryzen 5000U graphics within 15W power draw envelope.

According to AMD’s official benchmarks, for example, the Ryzen 7 6800U (which will be the top model of the 15W-28W series) is supposed to beat the integrated Iris Xe graphics in Tiger Lake (768 shaders) by 20 to 78 % in games, with some cases seeing even higher difference, and also beating even the standalone GeForce MX450 significantly (no comparison with the new GeForce MX550 and MX570 so far). Ryzen 6000 will probably be behind in single-threaded CPU performance compared to the mobile Alder Lake, but AMD will be able to rely on their integrated GPU, which should have a big lead over the Intel’s new product.

Ideally, because of this, there could now be more laptops providing decent gaming performance with just integrated graphics instead of these basic standalone GPUs, which would improve power draw and also probably make cooling and board design easier, so laptops could be cheaper too. However, laptop manufacturers seem to like cheap standalone graphics and put them even in laptops where it hardly makes sense, so the question is whether they will accept this.

The graphics also has a new display output engine, which is supposed to support HDMI 2.1 and DisplayPort 2, but we don’t know the maximum resolutions supported yet. Despite some reports suggesting Rembrandt wasn’t supposed to be able to do hardware AV1 decoding, in the end that is luckily not true. According to AMD, hardware AV1 decoding  is included in the Ryzen 6000, which is a nice surprise.

One weakness of the mobile Ryzen 5000 (and 4000) platform was the lack of PCI Express 4.0 support. The Ryzen 6000s have now rectified that, and the SoC in mobile form has a PCIe 4.0 ×8 interface for discrete graphics and an additional 12 lanes for connecting NVMe SSDs via PCIe 4.0 ×4, or for SATA drives and other peripherals.

Importantly, the Rembrandt SoC supports USB4, so laptops will be able to have the approximate equivalent of Thunderbolt 3 or 4, allowing the connection of fast docks and peripherals including external graphics cards. The platform will also support Wi-Fi 6E, but that will be provided by a separate wireless adapter (AMD is working with MediaTek on “custom” adapters, so some laptops may likely have AMD RZ608 chipsets instead of Intel adapters). 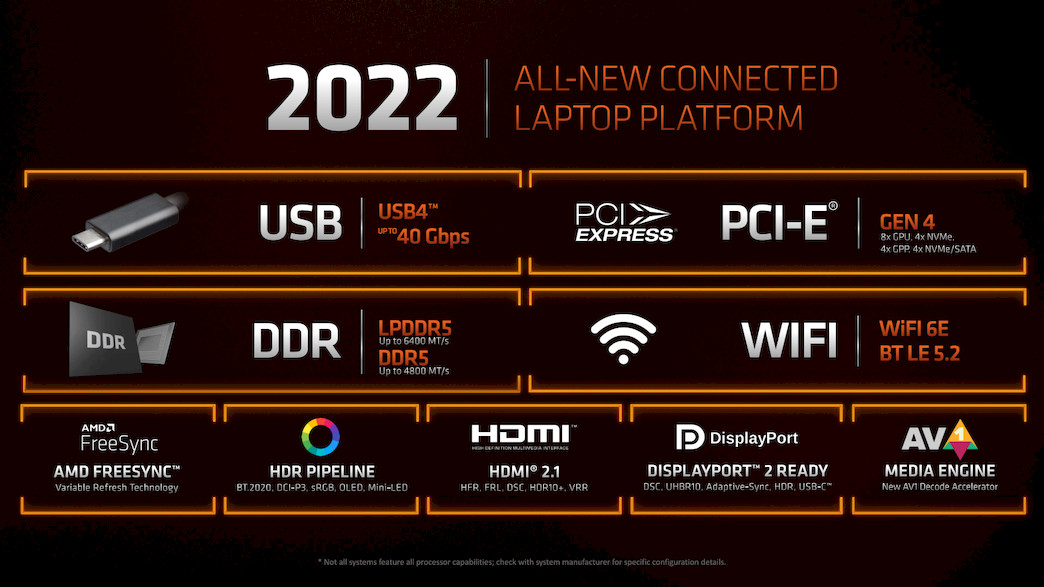 Rembrandt contains even more blocks that the APU did not have until now. It brings an AI accelerator and image processing unit (in the form of the Tensilica Vision Q6 and D5 DSPs), which will probably be especially useful for filtering images from laptop webcams.

The Ryzen 6000s also include Microsoft’s Pluton security enclave/processor, probably being the first processors from AMD (and possibly the first PC processors ever) to do so. This should probably be used to augment Windows security features such as TPM, Secure Boot, disk encryption, etc. 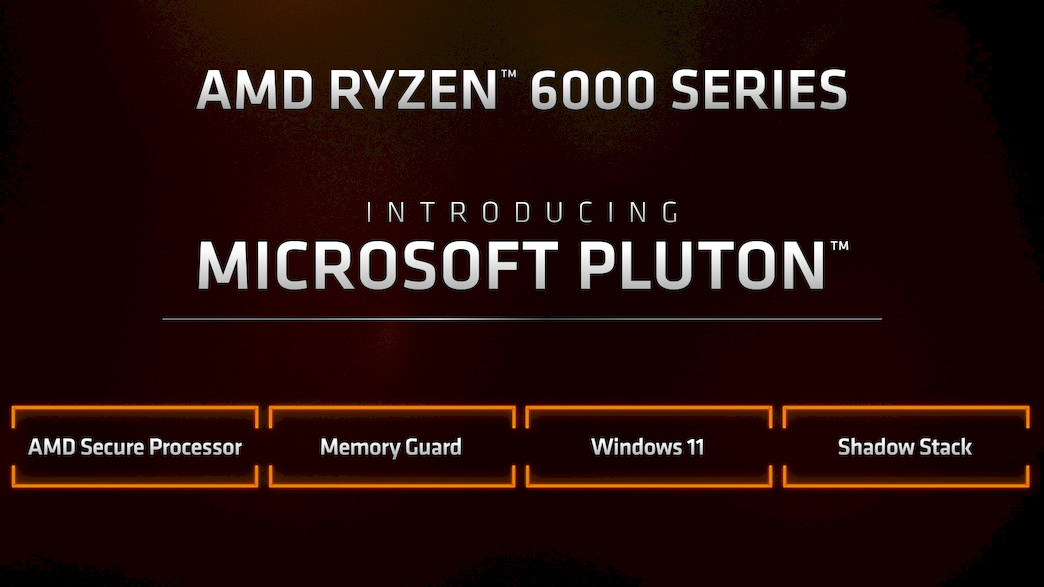 Ryzen 6000 will again have a high-performance and and a low-power versions. The versions for gaming laptops, labelled H and HX, have 45W TDP (in the case of HX, the vendor can increase power draw and therefore overclock the CPU) and there will again be a lineup of HS version with reduced 35W TDP.

Power-efficient processors for mainstream laptops have a TDP of 15-28 W, where the laptop manufacturer has the option to select the TDP. This 28W TDP with the option to lower it (so-called cTDP-down) has started to be pushed by Intel in the Ice Lake and Tiger Lake laptop generations, so AMD seems to have aligned itself with their policy – perhaps because laptop manufacturers will often use the same chassis and cooling assembly for both the Intel and AMD versions. Or maybe AMD just doesn’t want Intel processors gaining a performance advantage in tests due to increased power draw.

AMD states that the Ryzen 6000 should have better power efficiency – this should be very much true for the new GPU, which will have much better performance with the same power draw, but thanks to the 6nm process, hopefully also for the Zen 3 cores compared to the Ryzen 5000. The processor should also have new power saving states and new adaptive power management (working with the OS) that could hopefully improve idle power draw and battery life. 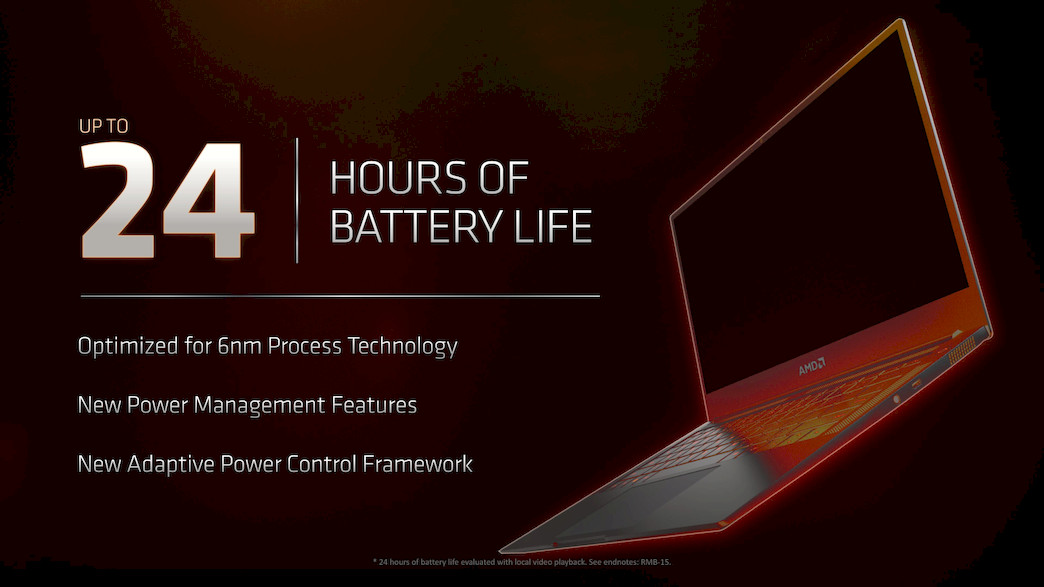 This is, of course, an area where each generation of new mobile processors tries to make incremental advances. With the Ryzen 6000, it should be possible to achieve battery life of up to 24 hours of video playback.

The power draw in tasks that don’t need maximum performance has been reduced, such as Netflix video playback, where there should be a 40 % improvement, or when working with Microsoft Teams (reportedly a 30 % improvement) and Google Chrome (15 % improvement).

The most powerful models of the Rembrandt generation are 8-core/16-thread models Ryzen 9 6980HX with 45W+ and Ryzen 9 6980HS with 35W TDP. Parameters are the same, the difference will probably be in the actual boosts achievable. The base clock speed of Zen3+ cores is 3.3 GHz and the boost clock speed (for single-threaded tasks) is 5.0 GHz. This is the first time ever that the Ryzen processor frequency has officially climbed this high (even though the 5950X can achieve it unofficially).

AMD will continue to offer slightly slower and cheaper alternatives to the top parts, with Ryzen 9 6900HX (45W+) and Ryzen 9 6900HS (35W TDP). They still have eight cores and 16 threads, but the clock speed has been slightly reduced to 3.3-4.9 GHz. Both these and the previous top models have Radeon 680M graphics with a full 768 shaders and a 2400 MHz frequency.

So far, AMD has only introduced two 6nm Rembrandt generation models to the mainstream 15W processor lineup. The king of the range will be the Ryzen 7 6800U, which has a full 8 cores/16 threads and a clock speed of 2.7 GHz base and a maximum boost of 4.7 GHz. Also, the Radeon 680M integrated graphics has the full 768 shaders, at 2200 MHz. The TDP can be 15 to 28 W, depending on the laptop manufacturer’s choice, and the base frequency probably applies to 28 W.

The cheaper alternative will be a bit stripped-down 6-core with 12 threads Ryzen 5 6600U. It also has a TPD of 15-28 W, the frequencies are 2.9 base and 4.5 GHz boost. But this model will probably be more attractive for casual work laptops, not for gaming use. In fact, the integrated graphics have also been trimmed down to the 6 CU (384 shaders) Radeon 660M at 1900 MHz, so the gaming performance won’t be nearly as nice here. Too bad AMD can’t or won’t offer a version of the graphics with less cut-down execution units, with reduction to 8 or 10 CU.

It is possible that a quad-core model will be added later, but AMD has not yet announced it. Unfortunately, it would also probably have that trimmed down GPU.

According to AMD, the Ryzen 7 6800U can achieve up to 28 % better multi-threaded performance in Cinebench R23 and up to 11% better single-threaded performance than the Ryzen 7 5800U. PCMark 10 Extended scores are also said to improve by 28 %. However, these may be cherry-picked (and exceptional) cases, AMD is apparently comparing a Ryzen 6000 set to draw 28W here with a Ryzen 5000 set to draw only 15W, so the performance differences could largely be due to this. Realistically in laptops, a lot will always depend on how the power draw and boost is set.

Just like when AMD supplemented the Ryzen 5000 “Cezanne” last year with older Lucienne models, which were rebranded Ryzen 4000s with improved power draw management and similar tweaks, the 15-28W segment will now see a similar shuffle. Indeed, the cheaper model that the Rembrandt line does not cover will be filled-in by processors codenamed Barcelo, which are a refresh of Cezanne. This means they have Zen 3 cores on the 7nm process and Vega GPU architecture, as well as DDR4 and LPDDR4X memory support; they do not, however, support PCIe 4.0.

Since Barcelo will always have Zen 3 cores, it should be a good upgrade over last year’s cheaper Lucienne chips with Zen 2 cores. The biggest drawback will be the older integrated graphics, which might stop being supported by drivers sooner than the RDNA 2 graphics, in the future. On the other hand, laptops with these Ryzen 5000 Barcelo models will still be able to use the cheaper DDR4 and LPDDR4X memory, which is also possibly one of the reasons they’re on offer.

Laptops with Ryzen 6000 processors should now slowly start to appear. This week and month will probably be limited to paper announcements and presentations, but the first real laptops with these processors are supposedly going to start selling as early as February (which may be only one or two models, however). 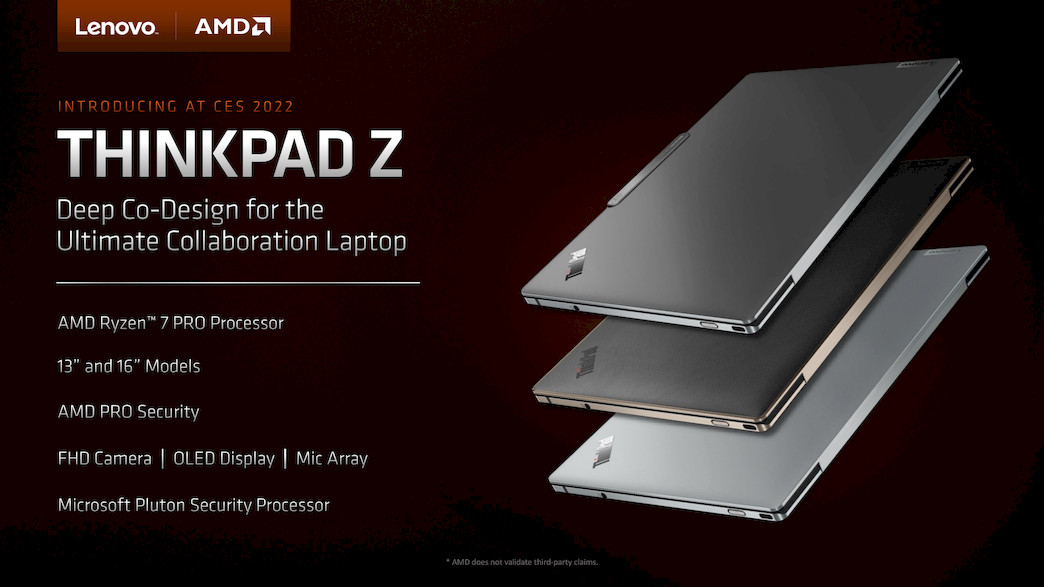 For example, Lenovo’s Thinkpad Z laptops are coming, which are supposed to be models specifically aimed at remote working from home and similar activities (so they have, for example, an FHD webcam and more advanced microphone arrays) with 13- and 16-inch OLED displays and Ryzen 7 Pro processors. Over 200 different “premium” notebook models with Ryzen 6000 should be released this year, according to AMD.