From Olympus back to ordinary mortals. Though the GeForce RTX 4080s are quite a bit weaker than the RTX 4090s, they’re also significantly more power-efficient and cheaper. And their performance still exceeds the top models of previous generations of Nvidia and AMD gaming GPUs. In addition, MSI’s most powerful model – the Suprim X – pushes the GPU clock speeds very high, while efficiency is still top-notch.

The RTX 4080 Suprim X officially exceeds the 2625MHz GPU reference boost by 105 MHz, and in practice, (in better-than-critical cooling conditions) it reaches even higher. The table of complete parameters is traditionally reserved for the second chapter of this article, but some of the basics are worth mentioning here as well. The RTX 4080 still supports PCI Express 4.0 (this means that you don’t need a platform with PCIe 5.0 for maximum bandwidth), has 16 GB of GDDR6X memory with very high bandwidth (22.4 Gbps), a 256-bit memory bus, and a GPU with 9728 shaders (CUDA cores). And, as with all GeForces with the “RTX” prefix, the 4080 has tensor cores (304) and supports ray-tracing graphics.

One of the new features over the previous generation is support for AV1 encoding, but DisplayPort 2.0/2.1 is missing from these cards (the RTX 4080 also still uses the 1.4a standard). Although you can’t use it at the moment (you can’t connect it to anything), prospectively, the new monitors will miss this interface a bit in the next year. And it will be a competitive disadvantage after the release of Radeon RNDA 3.

More than the general parameters of RTX 4080 graphics cards, we will now be interested in how the implementation of MSI’s non-reference design – Suprim X – worked out. And this is a very large and heavy graphics card. The vast majority of the heatsink housing structure is metal, made of aluminum, and it’s a really sturdy design.

The heatsink of the Tri Frozr 3S is cooled from above by a trio of 95mm fans. What’s remarkable about their rotors is that the tips of the blades are linked in triplets. This does a good job of stiffening the critical area where the blades are most flexible and, in addition to higher vibration, eliminates the resonant frequencies that make their way into the sound of similar, but not stiffened in this way, rotors like this. 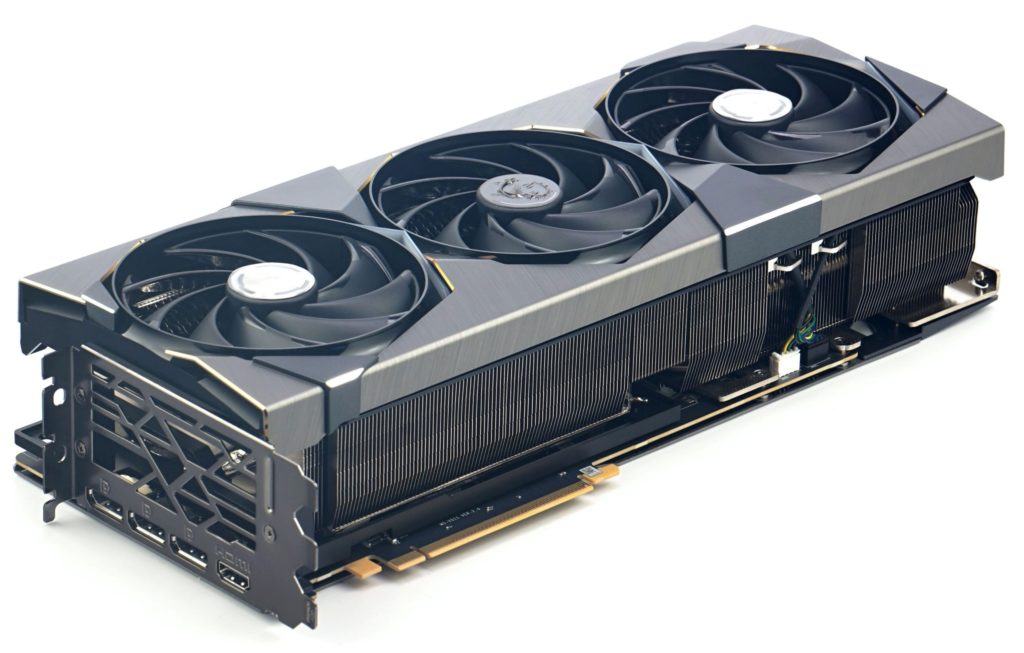 Acoustically, MSI handled it sensibly, as confirmed by spectral analysis. It says that the Tri Frozr 3S cooler of the RTX 4080 Suprim X graphics card does not rumble or hum excessively, and on the contrary, it is very pleasant. There was a time, though, when MSI had better overall acoustic expression. One thing is the impact of the cooler, and the other is how it is acoustically “spoiled” by the coils. And here it’s worse than it used to be, but we’ll get to that in more detail. 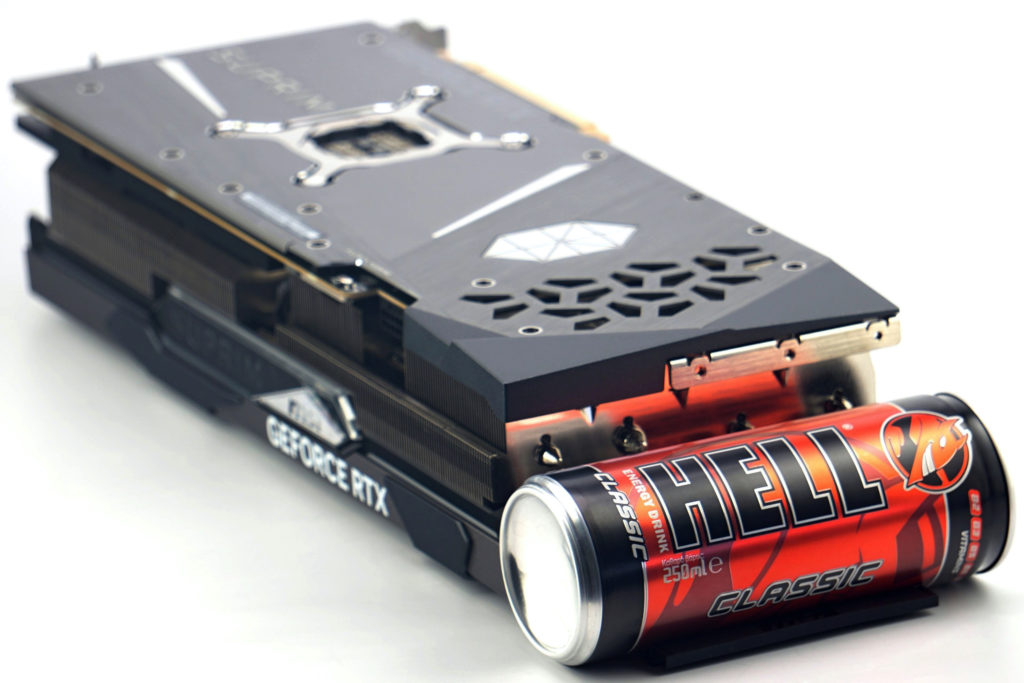 The back of the PCB is protected and reinforced by a solid backplate. It is nicely perforated at the back, in the part where the heatsink extends over the PCB, for more efficient air circulation. A little bit away from these places (by the power connector) is the switch between the BIOSes – Silent and Gaming. We’re testing with the “Gaming” BIOS, although it should be noted that there are no differences across the two here. The operation of the card isn’t more powerful, but it isn’t noisier either. 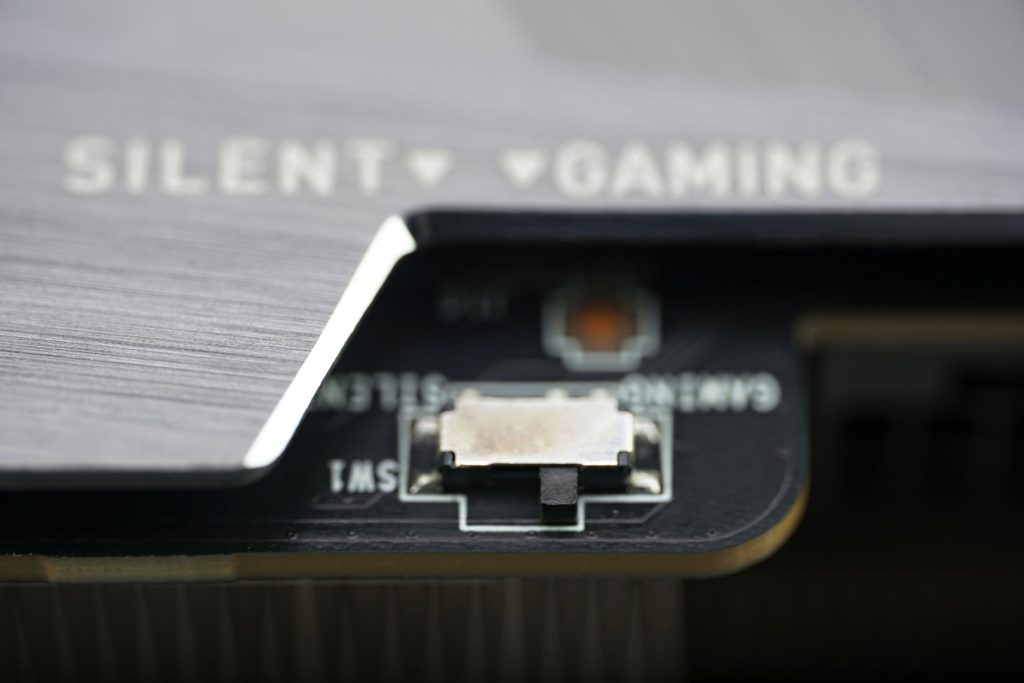 The graphics card is 346 mm long (not including the notch on the PCIe cap, measured from the ports to the back), which you’ll need to fit it in a case. It’s a very long graphics card, so measure everything well. 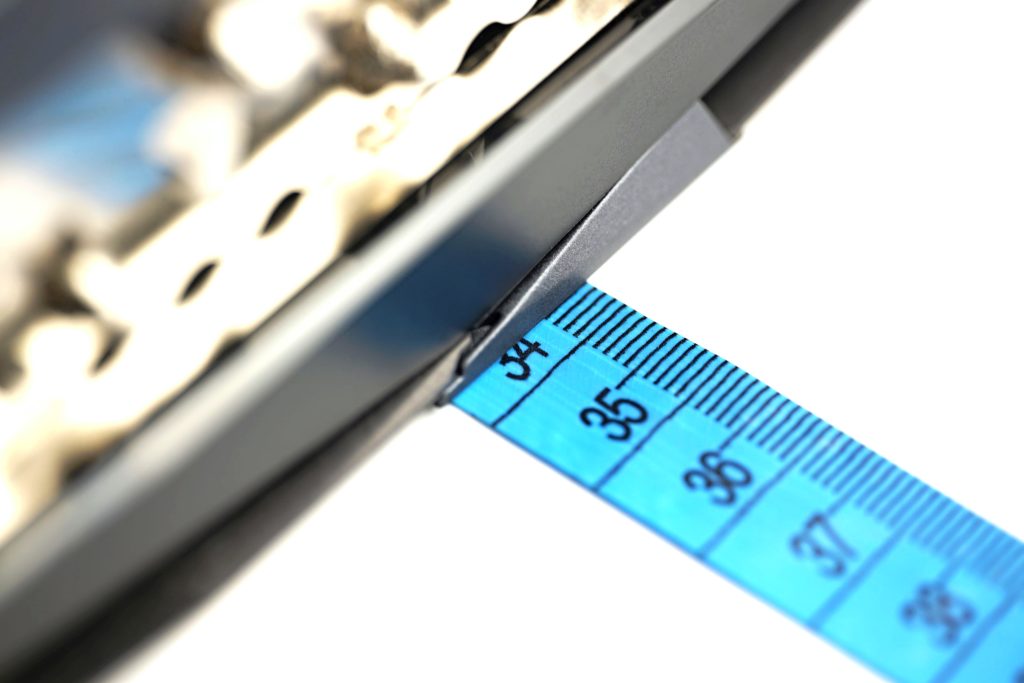 It will fit in most average-sized cases, equivalent to midi-towers of 45–60 litres, but in some cases it may be at the price of some compromises. Such as no longer installing a liquid cooler radiator behind the front panel. 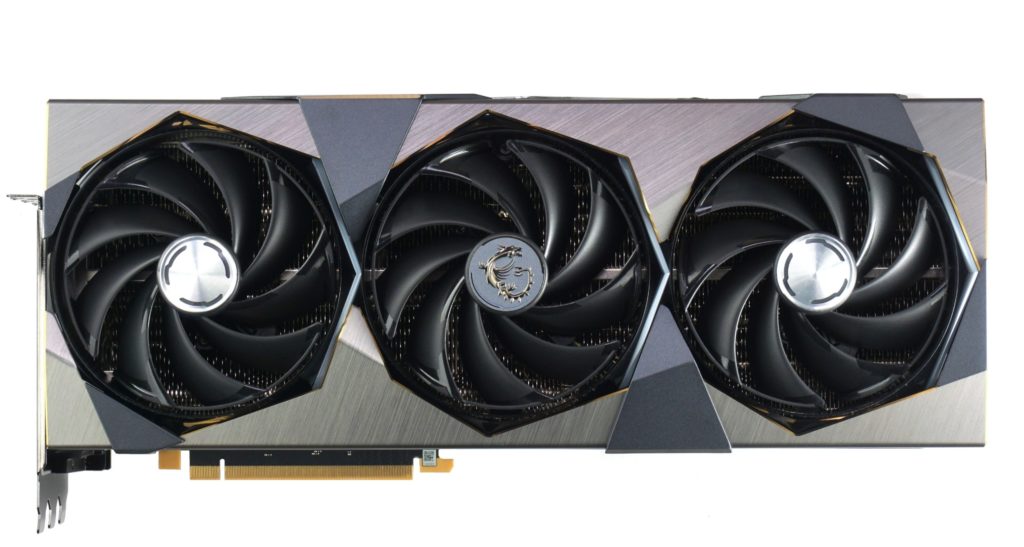 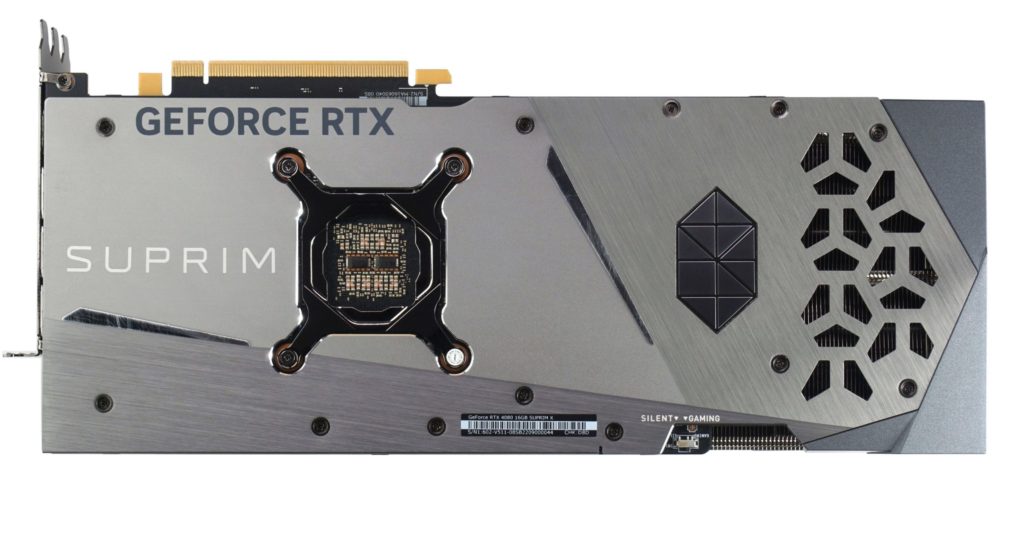 The Suprim X card, like many other RTX 4080s, is also excessively tall at up to 75 mm. So you have to count on it blocking multiple PCI Express slots underneath. And even on some motherboards from the same brand (MSI). The Gigabyte boards that have a large shared M.2 SSD heatsink under the first PCIe ×16 slot tend to be exceptionally well prepared for tall cards. There is thus a large space from the first PCIe ×16 slot to the second PCIe slot, which does not impair the compatibility of the board even with such tall cards. 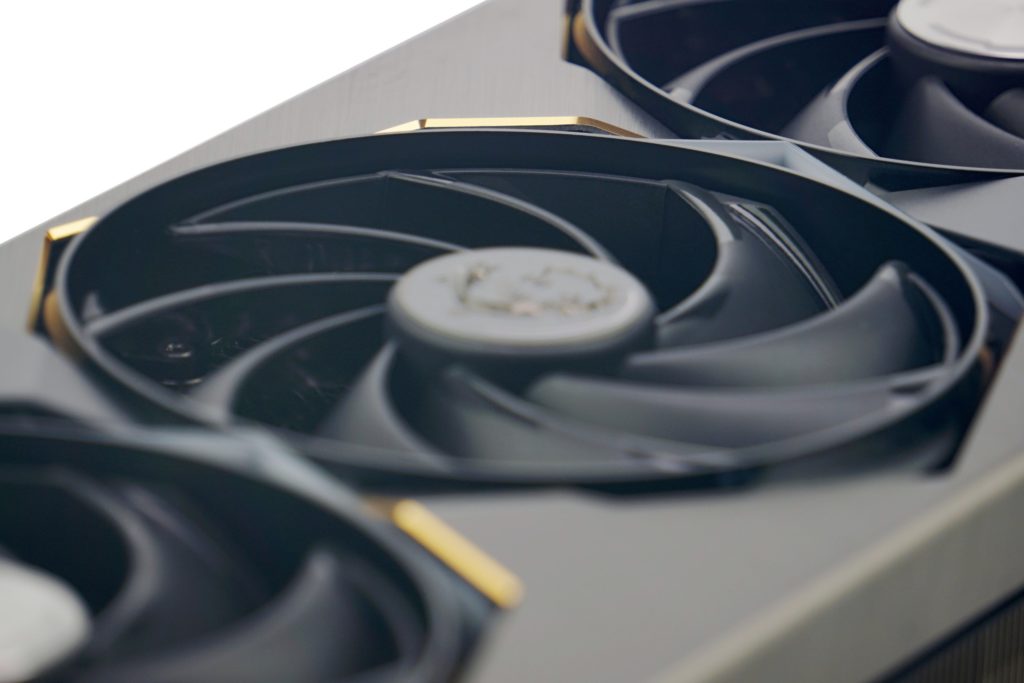 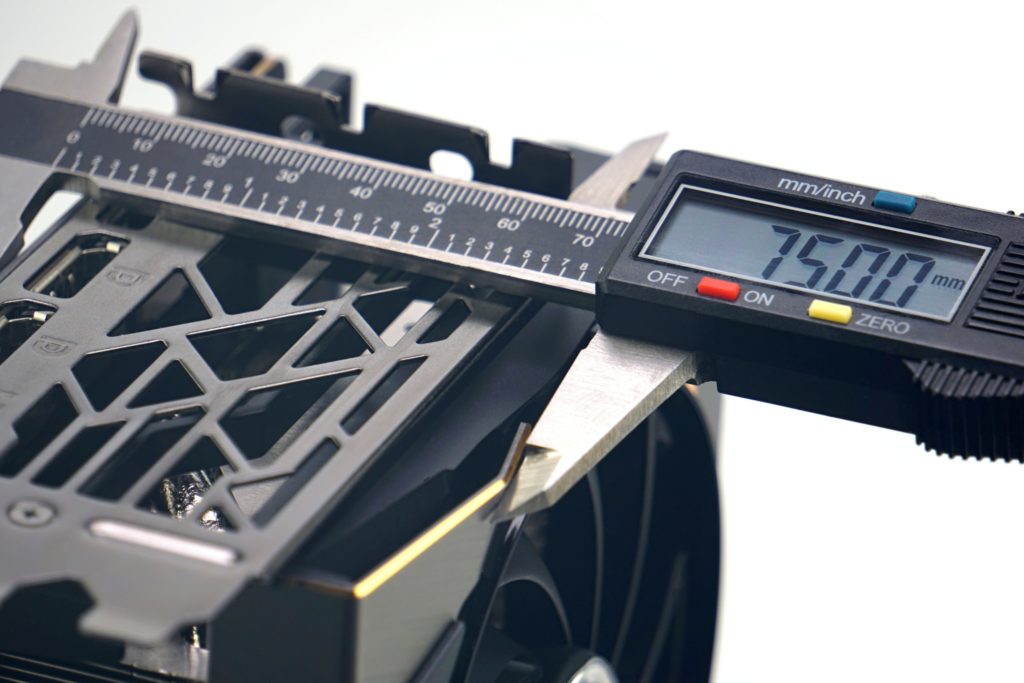 Due to the high weight (2370 grams), a bracket is included in the accessories, which lightens the PCI Express slot. The support with a full circular cross-section is designed well and fulfills its function well in the end.

We have already discussed the 12VHPWR adapter. Don’t worry, it won’t burn out even though the hollows used are from Astron. They are sufficient for such a load with large headroom. Still, make sure you get a proper snap lock on it and take care to plug it in straight. If you don’t push at an angle, it goes in like a knife through butter, you just have to get everything right. 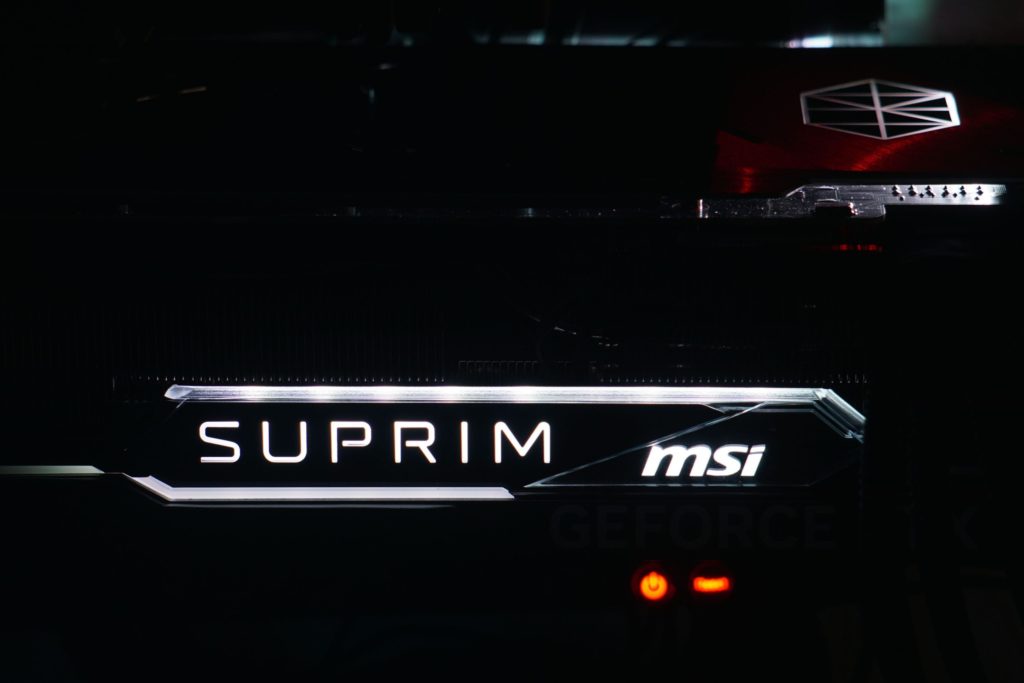 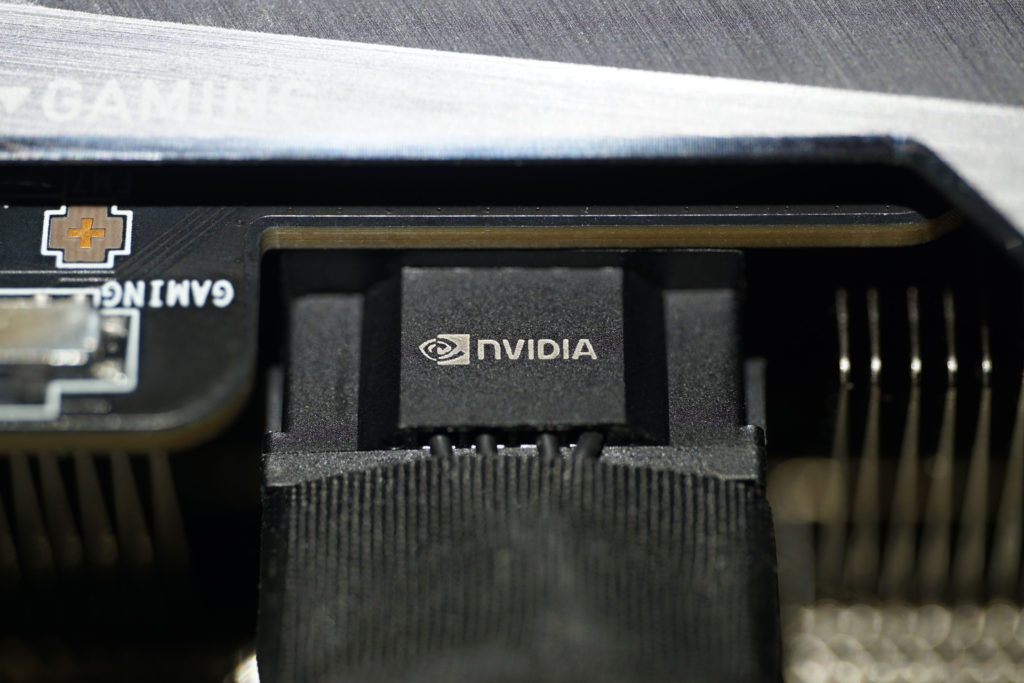 The fact that it is a more complex connector (considering the top part with 4 pins), higher demands are placed on precision even when installing it. But when everything goes right, you don’t have to worry in the slightest (heaven forbid about a fire) and for a more peaceful sleep, we also have thermal imaging for you. 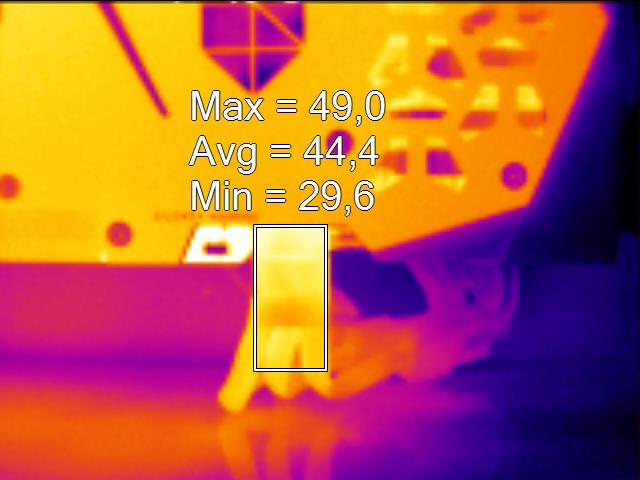 We measured a surface temperature of up to 50 °C at a maximum load corresponding to about 300 W. This means large headroom even in conditions with weaker system cooling or higher ambient air temperature. 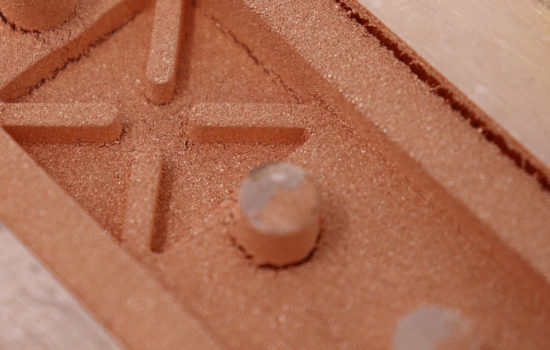 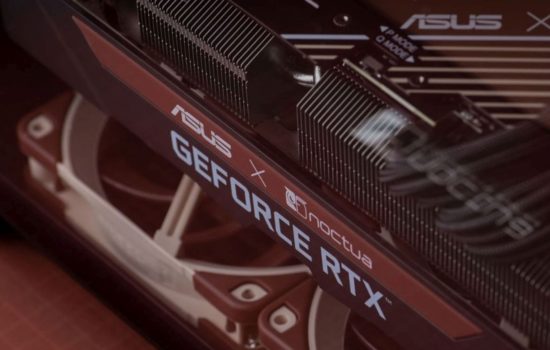 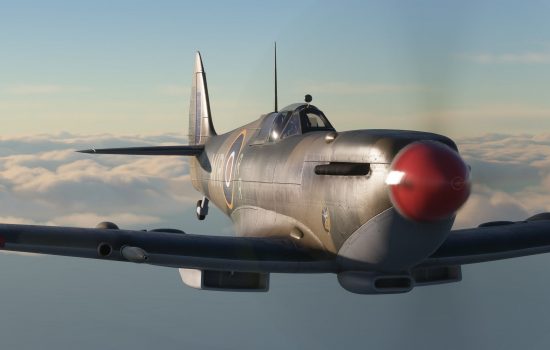