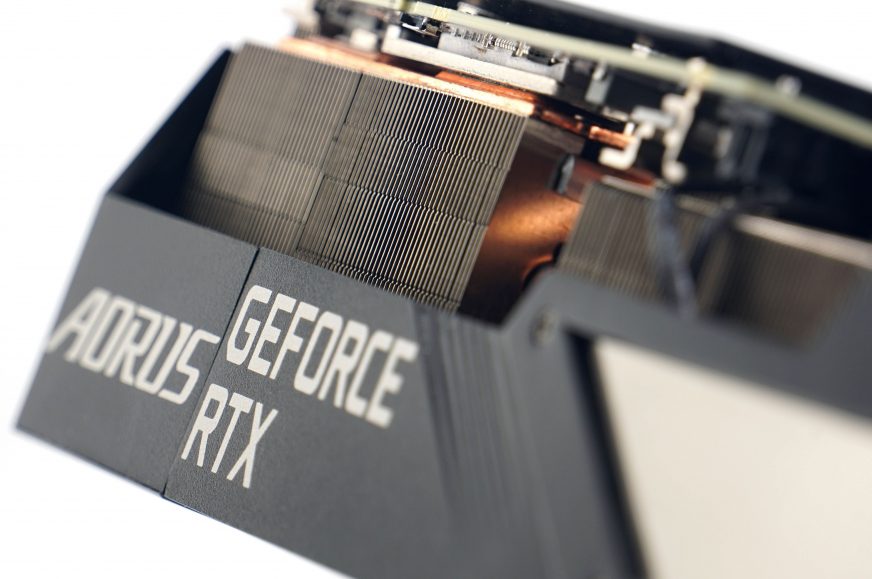 We have something special for you! We’ve tested the largest GeForce RTX 3080, which is even equipped with its own display. And at least as interesting are also the results with Resizable BAR, which are making their debut in our GeForce graphics card tests, so sit back and get ready for it. Those increases and decreases in performance compared to Radeon are worth it.

With the RTX 3080 Xtreme 10G, we are starting to test Resizable BAR on GeForce as well. It is already mandatory due to the extensive support. Nevertheless, it makes sense to still maintain and expand the database of results without ReBAR. There are more or less two reasons for this.

One is that not all Ampere RTX graphics cards have supported ReBAR until the end of March and from previous experience with AMD we know that the performance evolves differently over time – significantly more than without ReBAR, where the progress is relatively negligible due to various updates. This means that the results measured with ReBAR today can differ significantly from repeated measurements, for example, after a month, which must be taken into account not only in ours, but also in any other tests.

And the second reason why not to leave standard measurements (i.e. with Resizable BAR off) is that the increase in performance may not always be progressive and may be descending. We’ve also noticed this in AMD’s graphics cards, which have been supporting ReBAR for longer. In short, it is also good to know about situations in which ReBAR is not currently suitable. Radeons with ReBAR have been tested across all available GPUs from the RX 6000 series, and the RTX 3080 will now have its premiere from the GeForce graphics. This is probably the most appropriate choice for a start due to its high popularity. We have this RTX 3080 in a non-traditional version from Gigabyte.

The graphics card has the Nvidia GA102 core (200-K1-A1) with 8704 shaders, 16 GB of GDDR6X memory, which is connected to a 320-bit bus. It is also worth emphasizing the specified boost clock – 1905 MHz. In practice, it will traditionally be more, we’ll see by how much. Detailed specifications of Aorus RTX 3080 Xtreme 10G can be found in the table below.

The graphics card is huge. It is not only long (319 mm), but mainly thick. Its thickness is 70 mm, but only a double-slot blanking plate is still used. The height of almost two slots corresponds to a large chin under the PCIe plate. In practice, this is a four-slot graphics card with a weight of almost two kilos (1,872 grams to be specific, ~4.1 lb).

The cooler is characterized by various elements that are supposed to contribute to the improvement of cooling. Each of the three fans is different. The front and rear have the same shape (with long curved dense blades), but different dimensions – the rear one has 110 mm, the front 95 mm. An interesting feature below these fans is the frame with high triangular protrusions. These should serve to optimally direct the air in front of the heatsink. 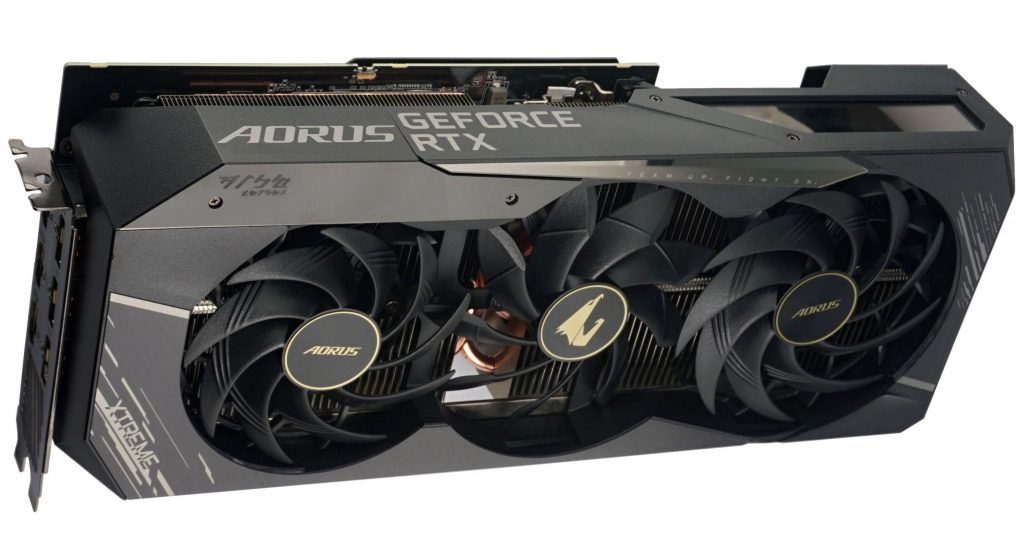 It’s very rare to see the center fan chop the air even under the blades of the fans on the sides. This should remove dead spots above the radiator where the effect of the fans is normally lower. And to make it complete, the center fan rotates in the opposite direction of the other two. This is to reduce turbulent flow to achieve the highest possible static pressure. 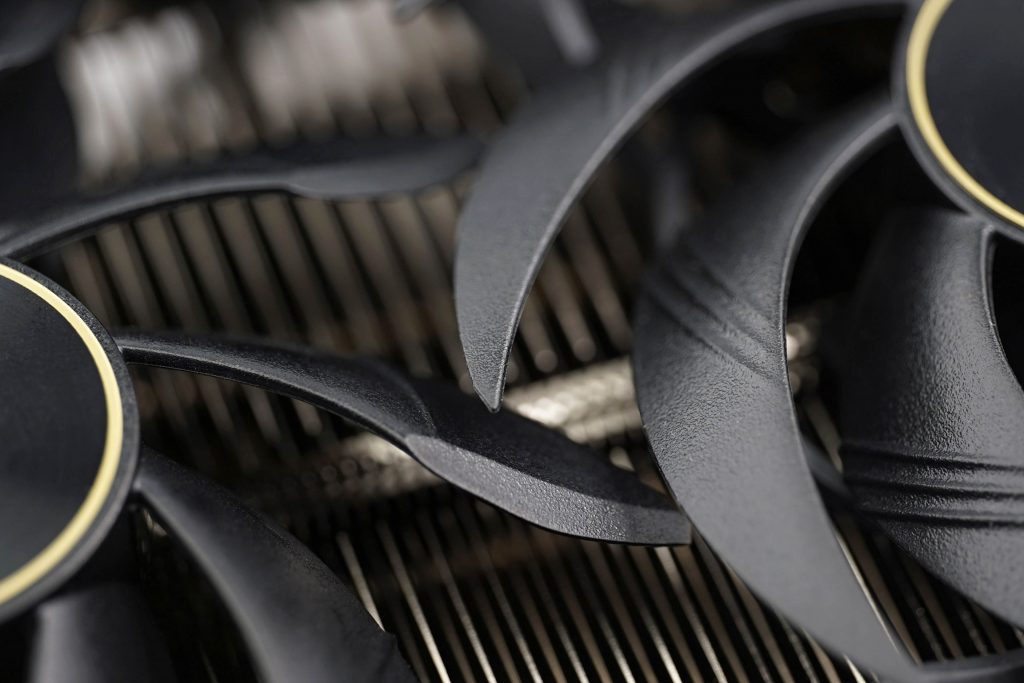 Apart from the extraordinary volume, the passive part is also remarkable. For example, by sloping the fins for a larger absorption area of the radiator. However, the core of the whole system is the vapor chamber, into which five 6-millimeter heatpipes are embedded. 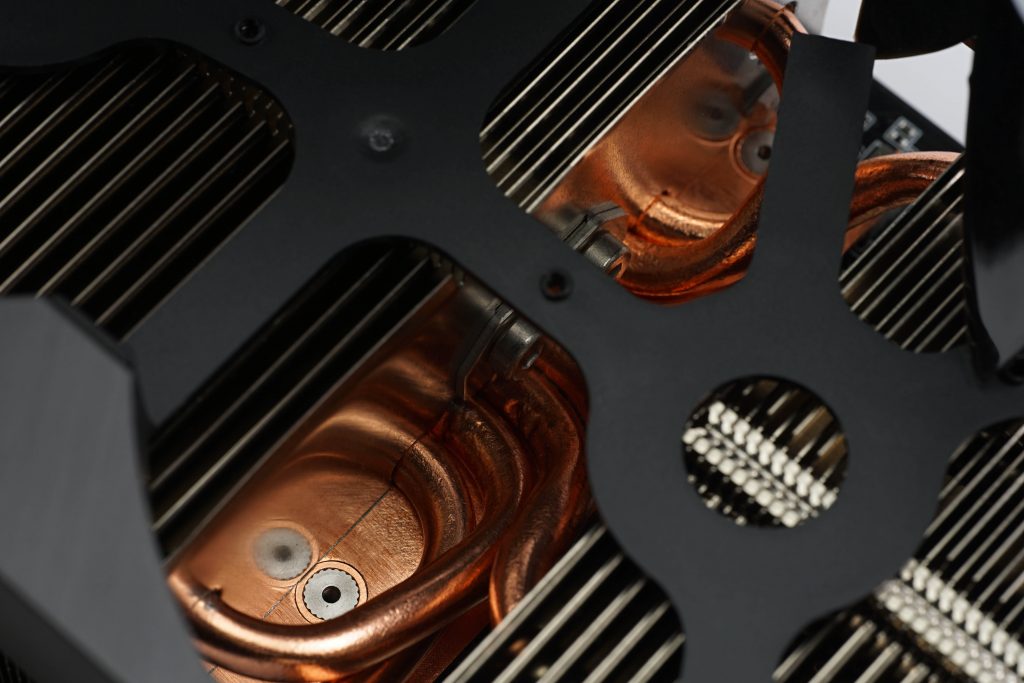 The power connectors are robust, there are three 6+2-pin PCIe connectors on the card. On the same side is a switch to switch between BIOSes. There are two of them, “OC” and “Silent”. In order not to limit the performance of the card in any way and to reach the highest possible performance in the tests, we use the “OC” BIOS during the measurements, but we also checked “Silent” to see if it lives up to its name. 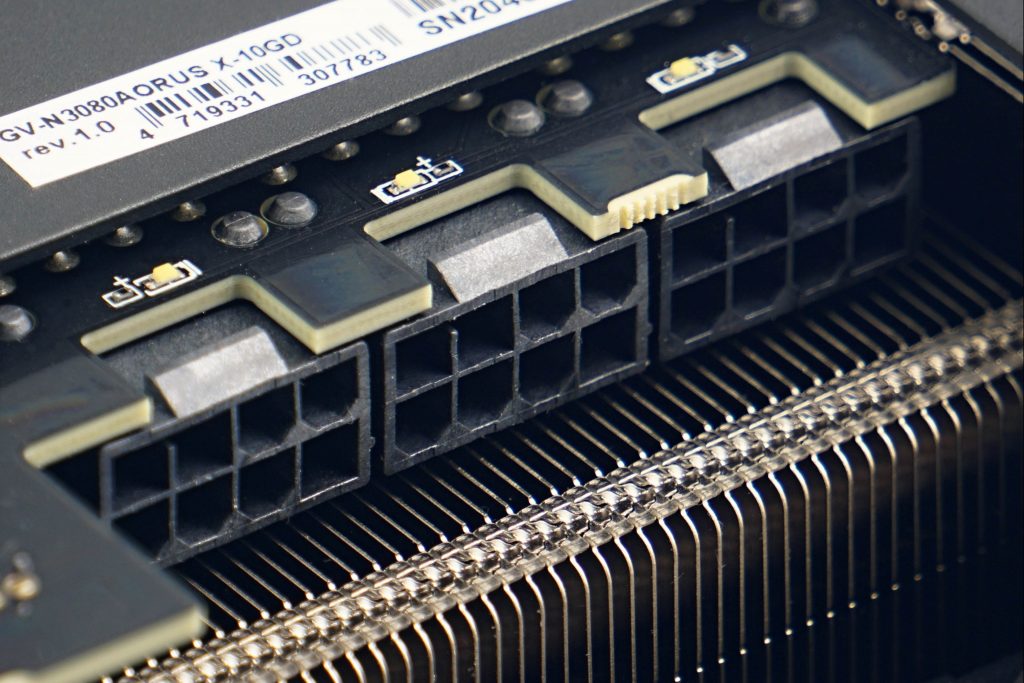 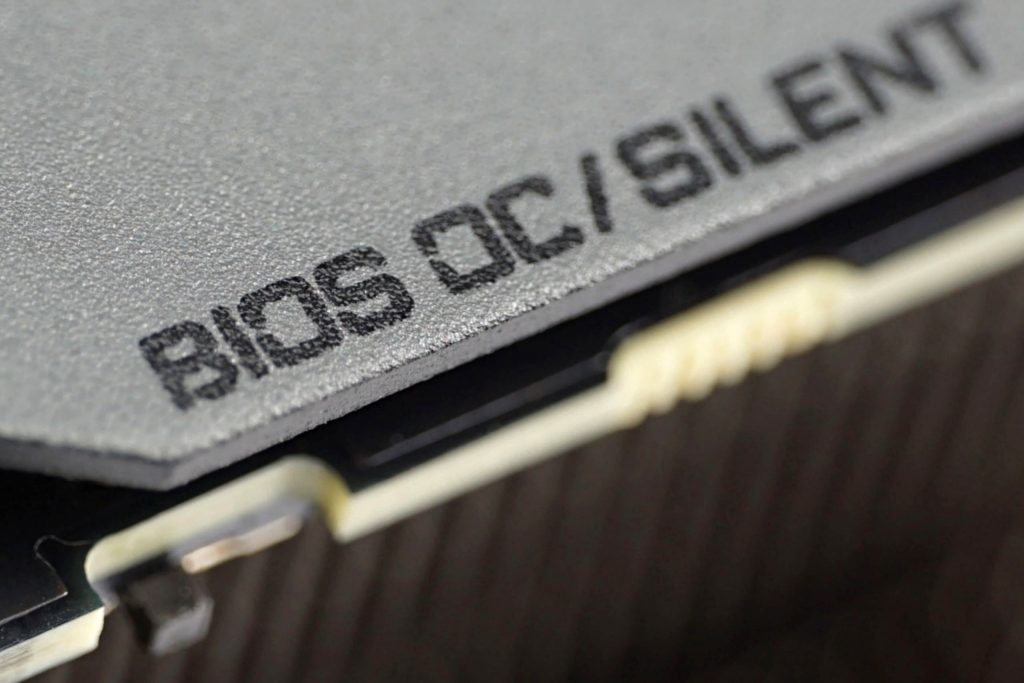 The accessories are quite austere, but collectors will be pleased with the Chibi mascot figure and a metal sticker. This luxury suitcase box does not hide anything else. Unfortunately, there is no support bracket that would lighten the load on the PCI Express slot either (although this is not a challenge for the armour plated ones) and at the same time keep the card in a horizontal position in accordance with aesthetic rules. 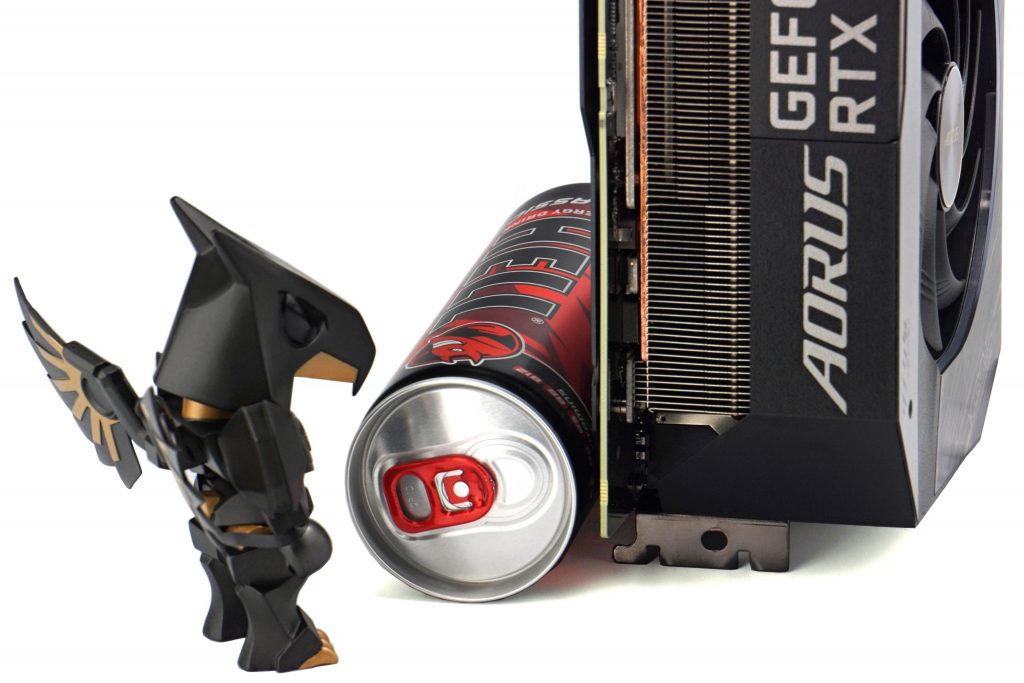 There is only minimal bending of the card, the massive backplate strengthens well. And it also engages in cooling. The backplate is made of aluminum and in place behind the VRM MOSFETs it is in contact with the PCB via a thermally conductive pad. On the other hand, it has a cutout for better heat dissipation from the radiator. 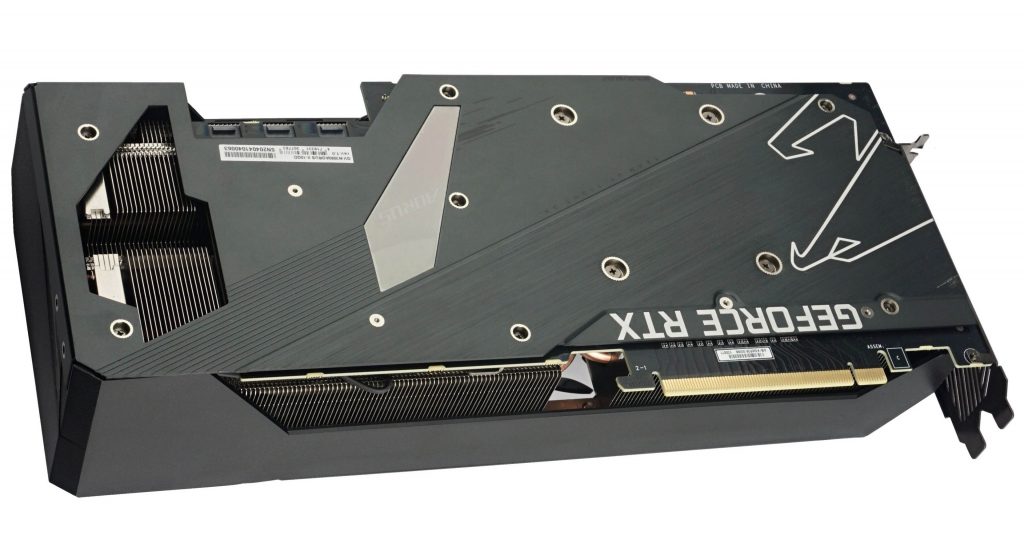 It is also necessary to point out the larger width of the card, i.e. the size to the side panel of the case. The PCB has 135 mm at the widest point (from the PCIe slot), but reaches the final 140 mm due to the raised cooler cover, which makes it prone to collisions in smaller or atypical PC cases. 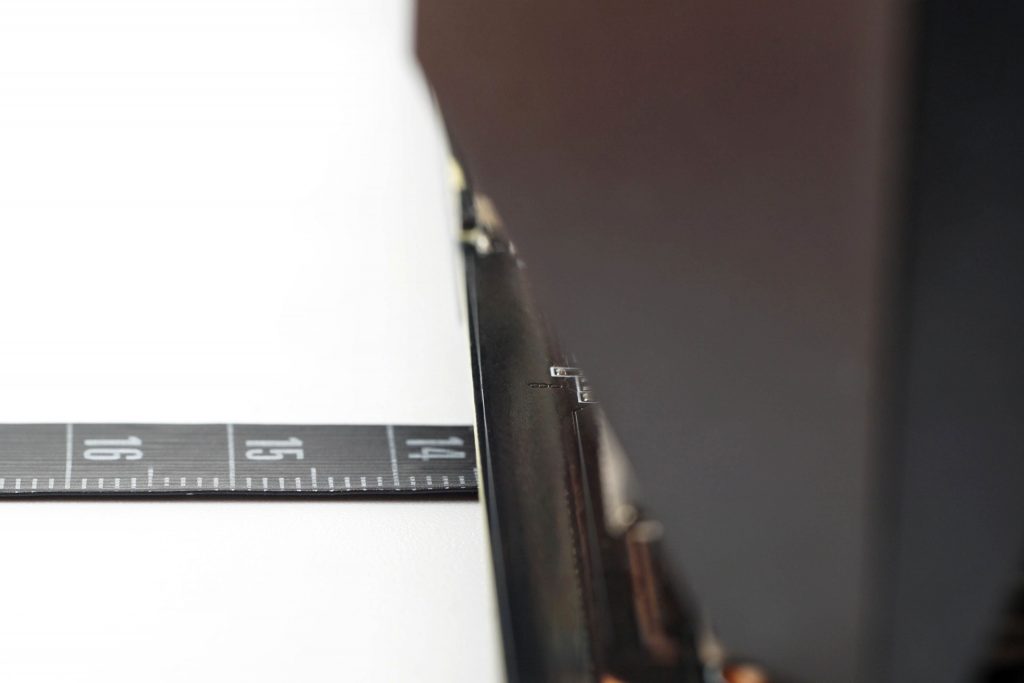 The RTX 3080 Xtreme 10G is attractive and rare especially thanks to its video output selection. There are three HDMI ports (2× 2.1 + 1× 2.0) and the same number of DisplayPorts (1.4a). You can only use four of the six available connectors at a time, but that is also very meaningful, and this configuration gives you more freedom than other cards. Some may prefer HDMI, which is usually limited to a single connector. 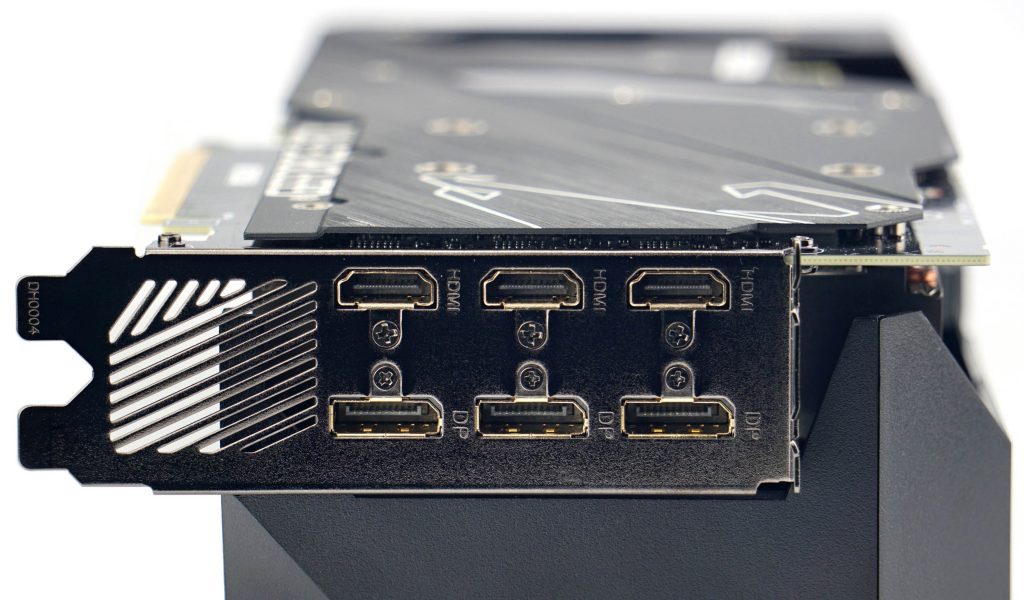 The detail on the output panel reminds of how thick the card is. One might argue that this is not a pure four-slot card, but know that you will not put anything in the fourth slot. It’s completely covered. 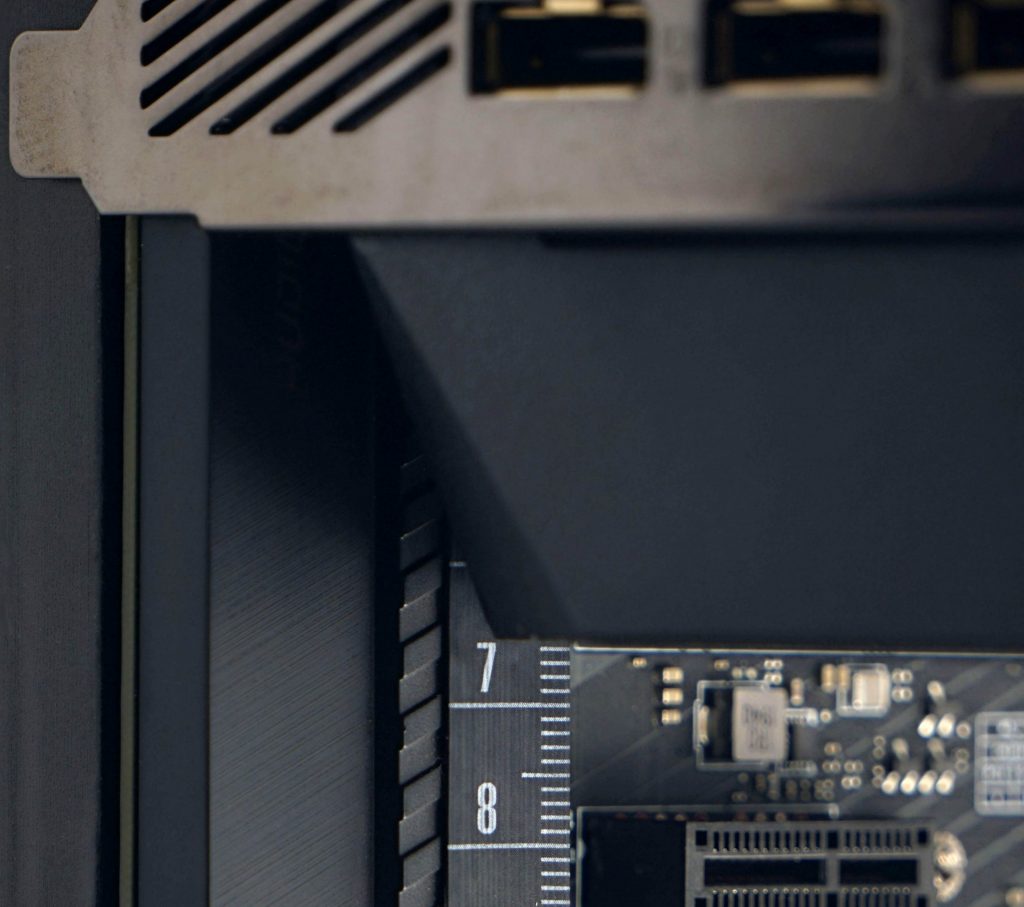 Gigabyte used the high profile of the card for mounting a 1.8″ display. It can display a variety of practical things such as clock speed, temperature or GPU usage, but you can also display any photo or GIF on it. Viewing angles are good, it’s an IPS panel. Still however, it is an LCD, so you will not miss the rectangular panel border because of imperfect black in the dark, but the backlight is pretty even.

We did not measure the image qualities of the display, but it’s going to be at least True Color. All customizations and content selection (for example, in the rotation of multiple pointers) can be set in the RGB Fusion 2.0 app. It is also used to work with the lighting provided by the RGB LED that is on the card from all sides. However, Gigabyte does not operate with it on too large of an area, and we can still talk about a fairly decent design. 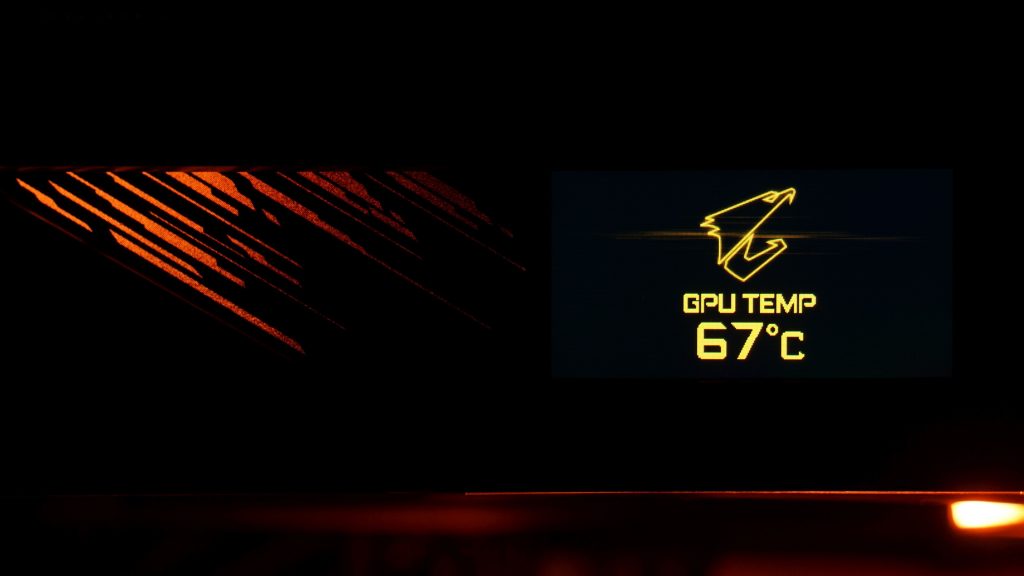 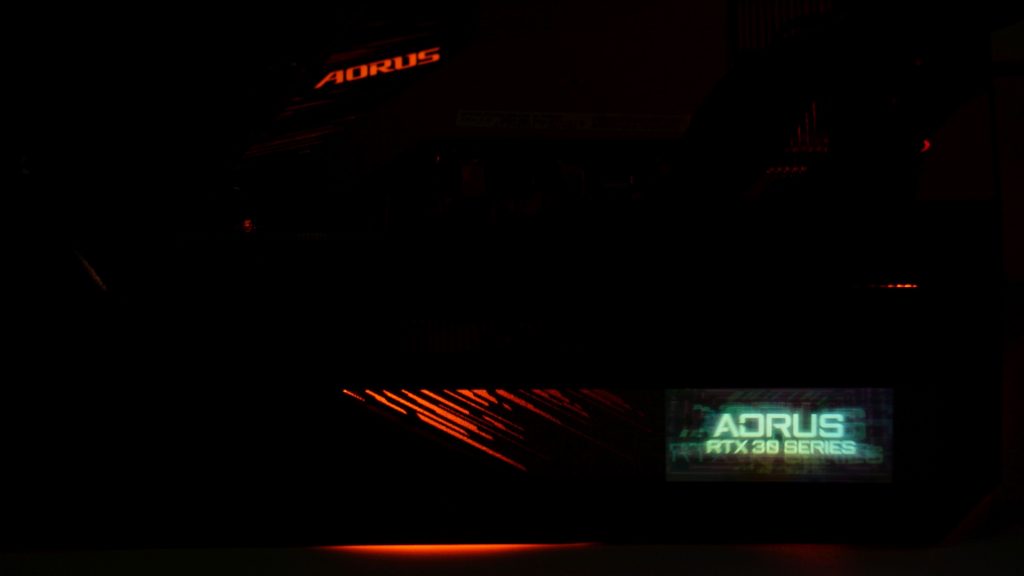 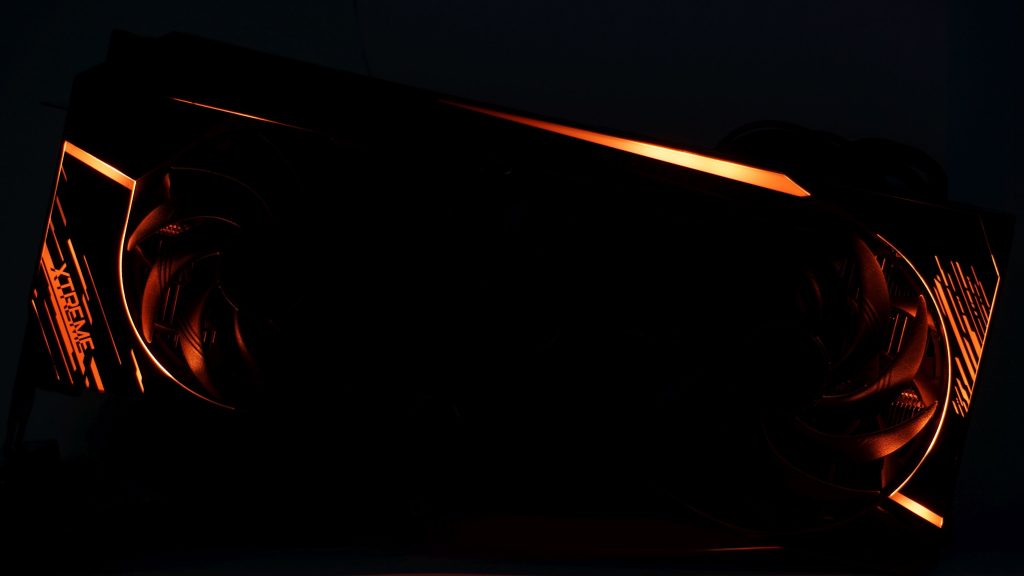 To increase performance by enabling Resizable BAR, you need to update the supported BIOS (F6, F11 or F22). It’s easier and faster than with a motherboard. You can download the BIOS archive from the Gigabyte product pages and the whole update process starts and ends by running an .exe file. It launches a command prompt and loads a new BIOS into the card.

Keep in mind, however, that the card is equipped with two BIOSes, so you have two directories in the archive. One for “OC” mode and the other for “Silent”. Before the update, the physical BIOS switch on the card should be in the correct position (before starting the PC, during initialization). For which BIOS is which file is listed in the attached text document, which is also part of the archive. 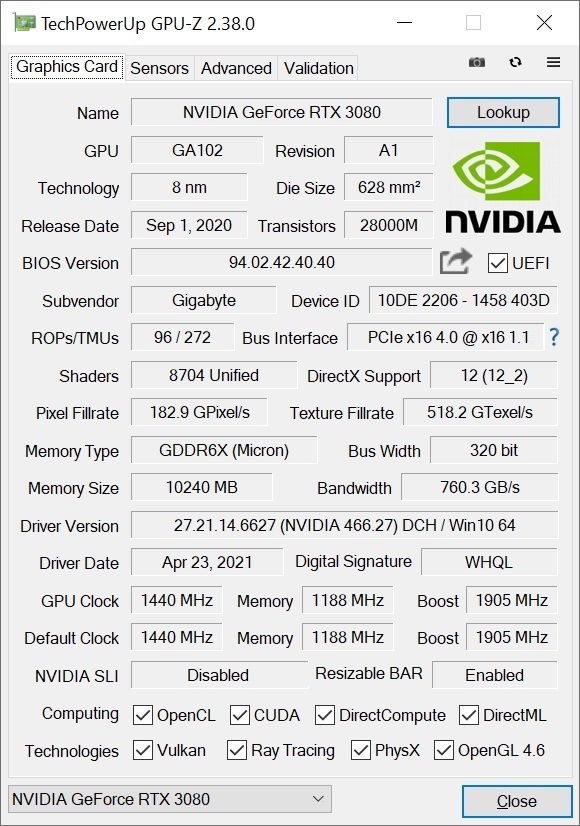 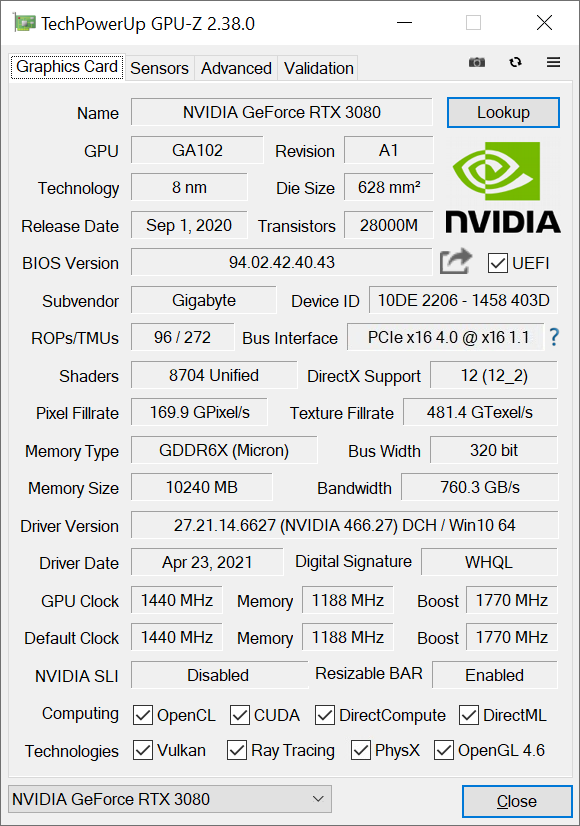 It is noteworthy that the Silent BIOS also reduced the boost frequencies, from the original 1815 to 1770 MHz. 1905 MHz in OC mode remains intact. The reduction in clock speed (and with it the power draw limit) in the “quieter” BIOS suggests that Gigabyte wanted to reduce the cooling noise even more. 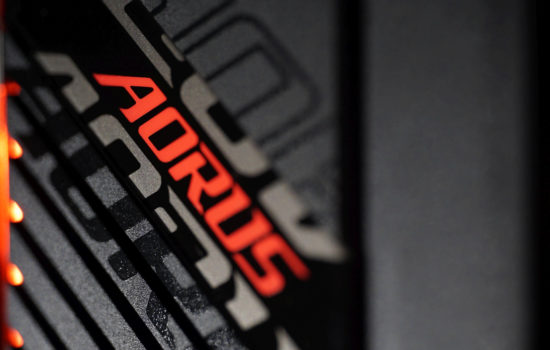 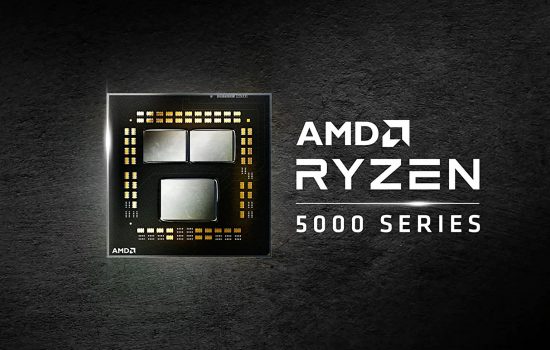 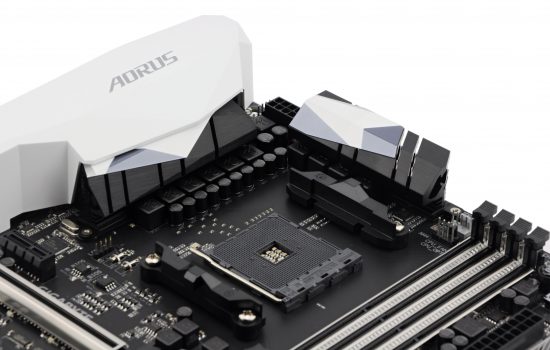