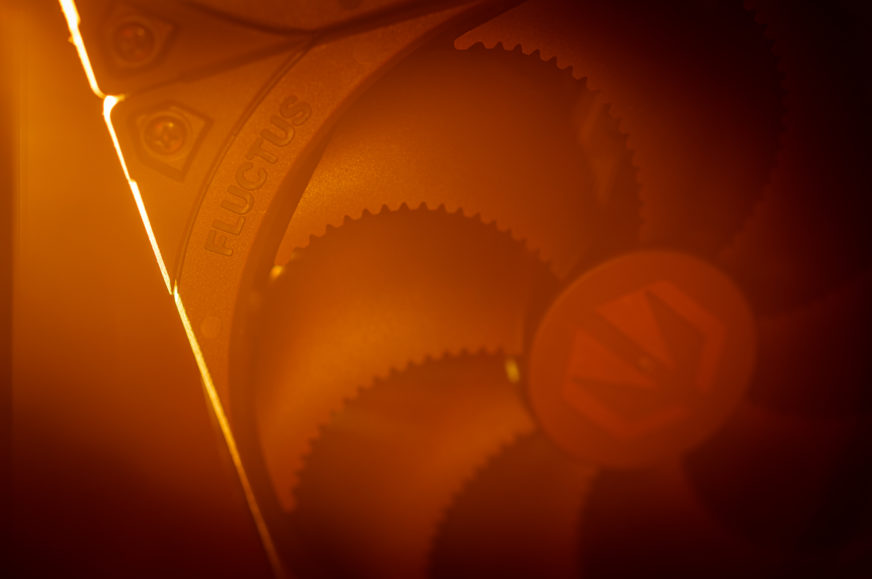 The SilentiumPC brand is undergoing a change to Endorfy today, and along with this change is the launch of the new liquid all-in-one cooler from the Navis series. Similar to the Navis F240, today’s new addition features the excellent Fluctus series fans. Moreover, the Endorfy Navis F280 will also surely impress you with its attractive price tag of just under 100 EUR. What we have here is a solid potential for a very attractive price-performance ratio.

In terms of design, the Endorfy Navis F280 is very minimalistic. Virtually all components of the cooler are matte black except for the top surface of the cooling block, which is made of brushed metal with the manufacturer’s logo. The cooler looks almost industrial with its simple lines and black colour and you will look in vain for RGB backlighting or other colourful elements. 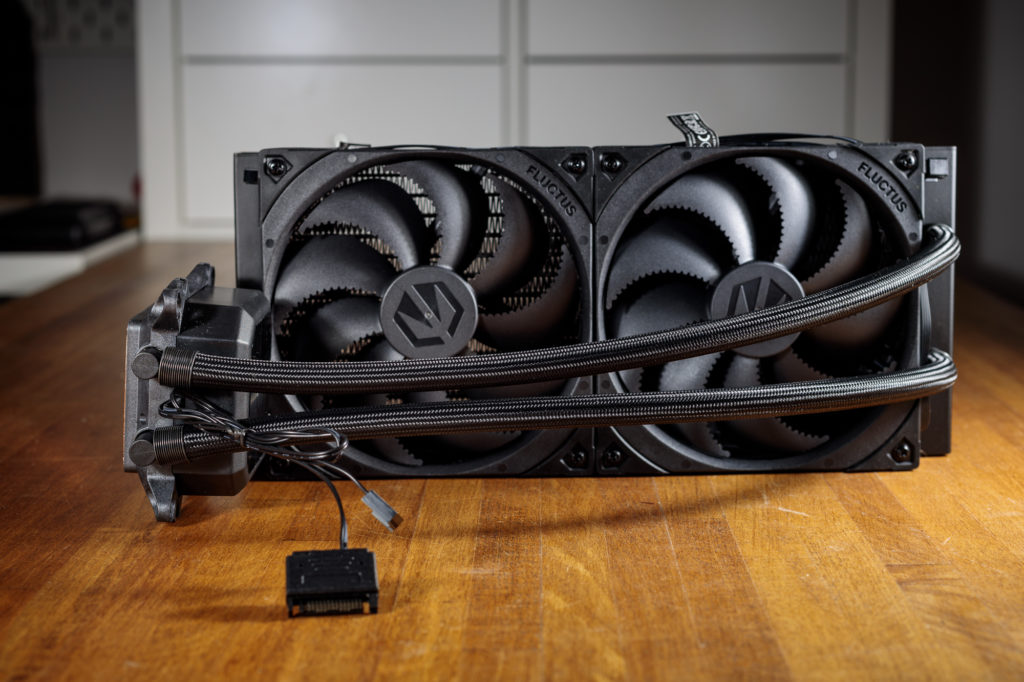 The design of the Navis F280 is very similar to the Navis F240, which I also recently tested. The cooling block and pump used are identical for these two coolers. So you will find a PWM regulated pump with ceramic bearing, a copper base with a large contact area and an integrated mounting system for all current CPU sockets (except TR4/sTRX4). Fluid flows back and forth from the cooling block via a pair of 390 millimeter long tubes that are equipped with a protective nylon braid. These tubes are attached to the cooling block with swivel fittings for easier handling. The manufacturer also recommends installing the cooling block on the processor so that their logo is upright (the tubes protrude from the block towards the motherboard I/O panel), which should ensure optimal cooling effectiveness. 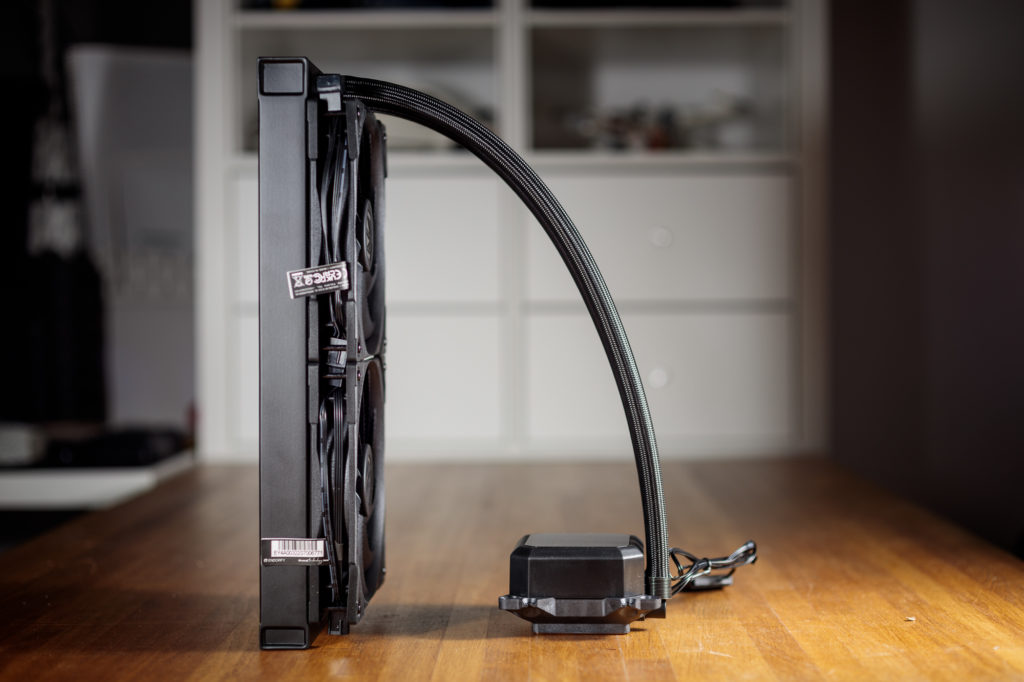 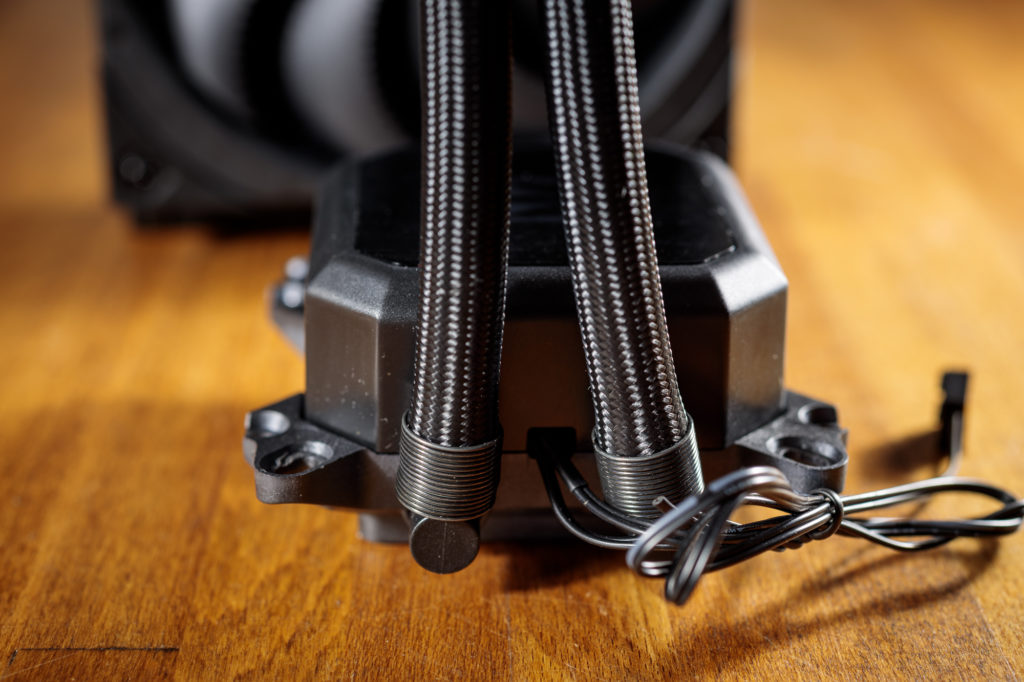 Compared to the Navis 240, this cooler differs only in the size of the radiator and fans, which are now 140 millimeters. The same type is also found in the Fortis 5 cooler, but here it is equipped with a classic square frame to ensure a good seal of the airflow between the fan and the radiator. And like the other coolers in the Navis line, this one is completely maintenance-free as well. For ease of installation into a build, the radiator is factory fitted with fans that have neatly routed wiring and also support serial connection. Just use the supplied extension cable to connect the fans to the PWM connector on the motherboard. A pair of pump cables also run from the cooling block. The first one with a SATA connector takes care of the power supply and the second one has a PWM connector for speed control. 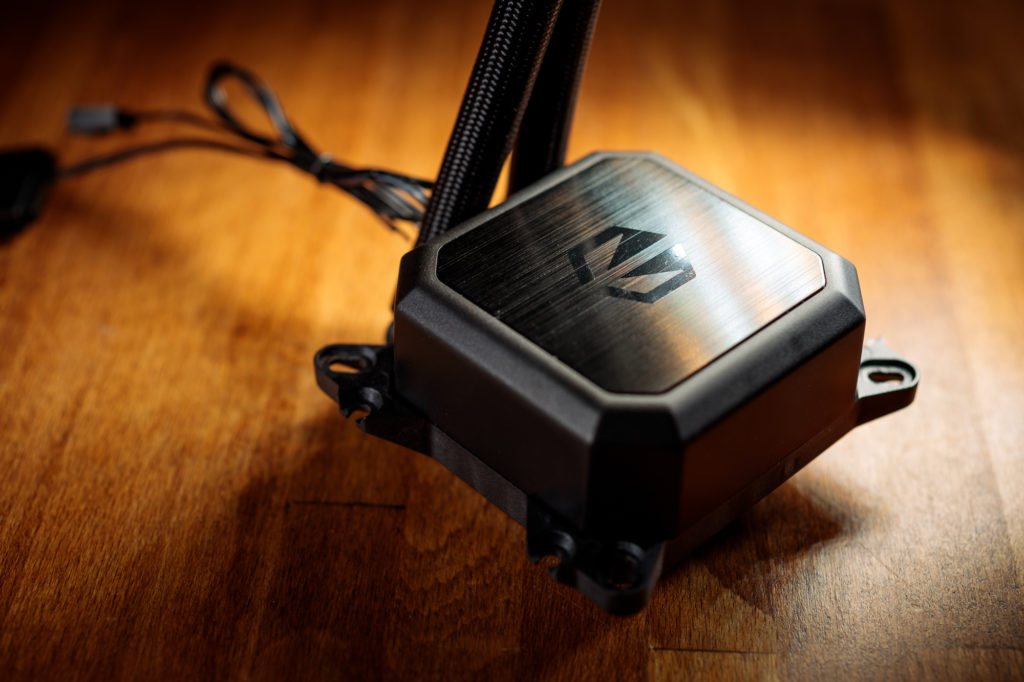 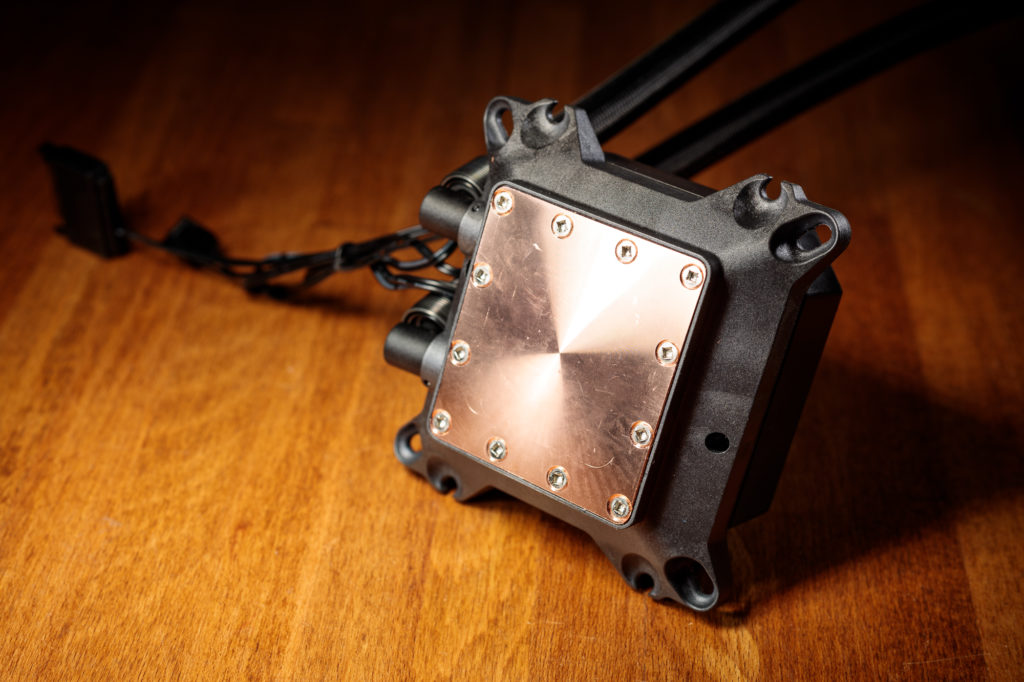 As I mentioned in the text above, the contact surface of the cooler is copper and impresses with its relatively large dimensions (compared to conventional AIO coolers). Theoretically, this cooler could be used on AMD Threadripper processors as well. However, just like Navis F240, Navis F280 does not support TR4/sTRX4 sockets. Still, this cooler will cover common CPU models with ease, so there is no need to worry about uneven heat transfer from the CPU to the cooler. 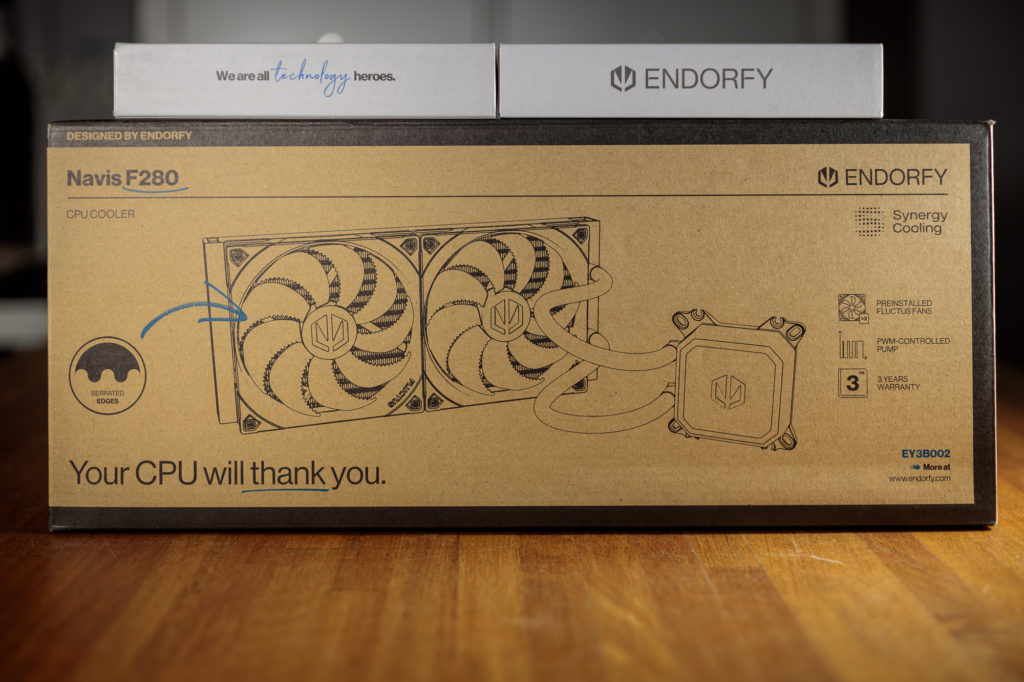 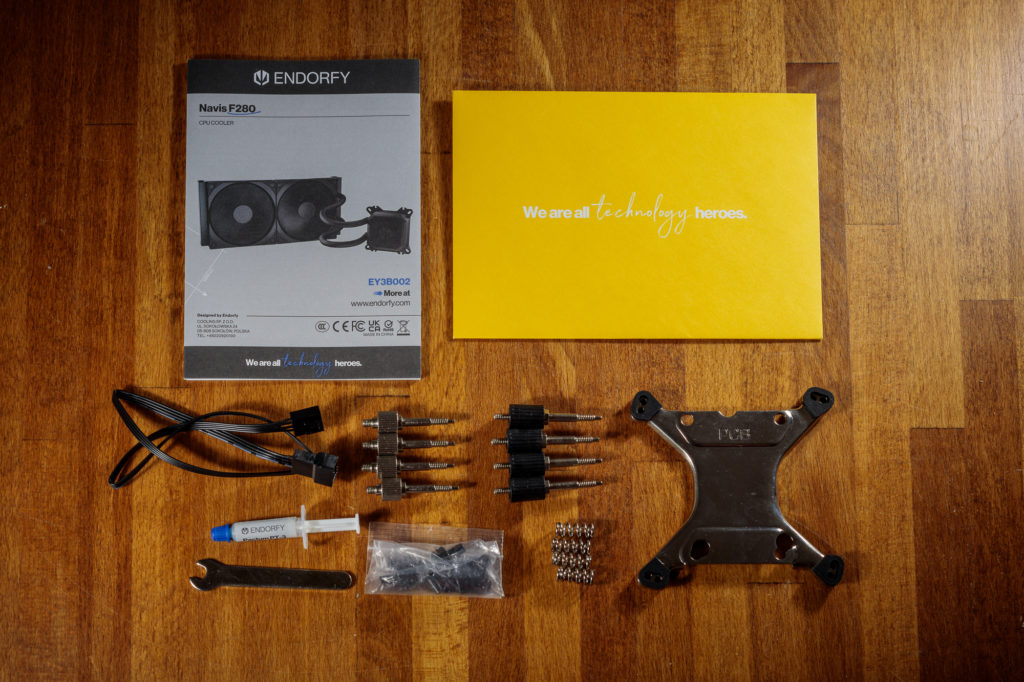 The cooler package contains everything you need to install the cooler on your processor, just choose the appropriate four screws for your processor socket. For AMD processors you will use the native motherboard backplate, for Intel processors you will use the backplate supplied with the cooler. The installation of the cooler itself is very straightforward and nothing complicated awaits you. In the accessories you will also find a set of screws for attaching the radiator to the computer case, the aforementioned cable for connecting the fans to the motherboard, a key for tightening the installation screws and also a clear user manual.

Endorfy Navis F280 is not too different from other AIO coolers. The radiator used is aluminum and is understandably wider to accommodate 140mm fans. The total depth of the radiator with fans does not exceed 55 millimeters to ensure maximum compatibility with the computer case. This cooler is compatible with all modern CPU sockets except AMD HEDT platform. However, what makes the Navis F280 clearly stand out from the crowd is its pleasantly low price compared to premium AIO coolers. We are practically getting slightly below the level of high-end air coolers, which gives this cooler a very good potential to become a bestseller due to its good price/performance ratio.

Unfortunately, Endorfy still does not provide any paper parameters on airflow or static pressure for Fluctus fans. However, the MTBF value of 100,000 hours demonstrates the manufacturer’s confidence in the bearings and motor used. In an informal conversation with the manufacturer, I was told that the Fluctus 140 is “just a bigger” Fluctus 120. I guess we all know that nothing is ever this simple. So you will have to wait for their detailed tests from my colleague Samák, who will surely not want to miss these new fans.
/* Here you can add custom CSS for the current table */ /* Lean more about CSS: https://en.wikipedia.org/wiki/Cascading_Style_Sheets */ /* To prevent the use of styles to other tables use "#supsystic-table-1828" as a base selector for example: #supsystic-table-1828 { ... } #supsystic-table-1828 tbody { ... } #supsystic-table-1828 tbody tr { ... } */