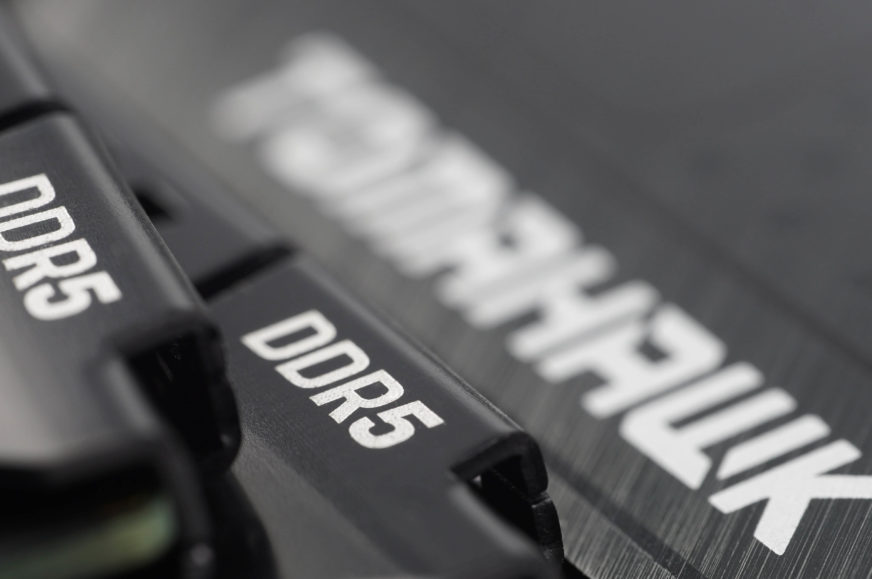 At first glance, it’s the same board as the last tested Z690 Tomahawk WiFi DDR4 with one difference, that it supports the newer DDR5 memory standard. That’s how the Z690 Tomahawk WiFi is profiled, but looks are deceiving. A detailed analysis shows that there are some differences, including ones in design. Whether it’s for better or for worse is something you’ll learn exclusively from our measurements.

Important note at the beginning

With a 1:2 divider (Gear 2), the memory controller has half the frequency, but that doesn’t mean that better results are guaranteed with Gear 1 (1:1). Therefore, we don’t even “excuse” the Gear 2 boards and don’t adjust the factory settings in this regard. What are the performance differences between DDR4 and DDR5 memory at the same controller frequency, you will find out in an upcoming test that we are focusing specifically on this issue. But now on to the Z690 Tomahawk WiFi.

MSI sells this motherboard for roughly 20 EUR more than the Z690 Tomahawk variant with DDR4, but because of the significantly more expensive DDR5 memory, the price difference is quite large in terms of a complete PC setup. But some may not see it so dramatically and the extra price may be justified, for example, just in terms of the longer lifespan of the DDR5 memory and the board itself. The LGA 1700 platform (and we believe the support of upcoming processors by current chipsets) will be with us for some time.

As you already know, MSI has two Tomahawk motherboards with the Intel Z690 chipset. In the designation of the variant with DDR5 memory support, any affiliation to the newer standard is missing. Thus, the attribute (DDR4) is only used to distinguish the variant for DDR4 memory. The full designation of the DDR5-capable board is, in short, “MSI MAG Z690 Tomahawk WiFi”. The absence of the “DDR5” designation is also the only difference by which you can quickly distinguish the cardboard boxes. This in the context of completeness does carry more detailed specifications, but that’s down to the small print on the back of the box’s graphics. 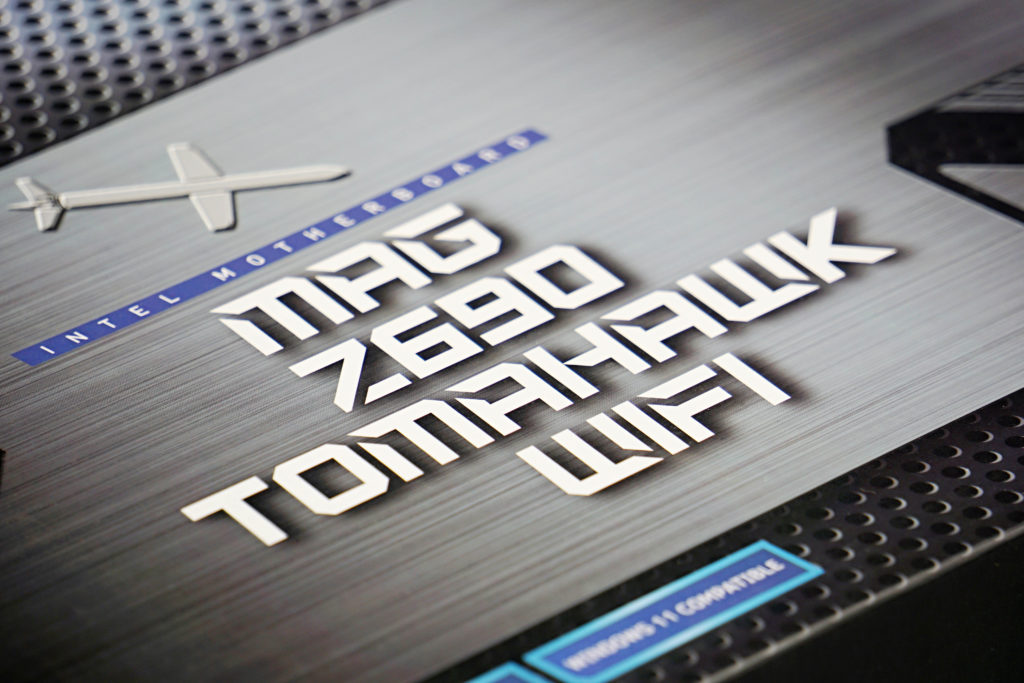 The dimensions of the board conform to the ATX standard (304 × 244 mm), and the PCB differs from the traditional ones only by a small cut-out from the right side. We wrote in the Z690 Tomahawk DDR4 article that this is a useless decoration, but I take back that statement. The practical significance is, of course, in the eventual more convenient cable feed to the SATA connectors. Although these are not visible from the front view, they are hidden under the chipset heatsink. The cutout in the case opens up more space to work with the data cable connection. In some cases, though, it will be at the cost of not being able to use an angled type connector due to a collision with the protruding motherboard tray plate. 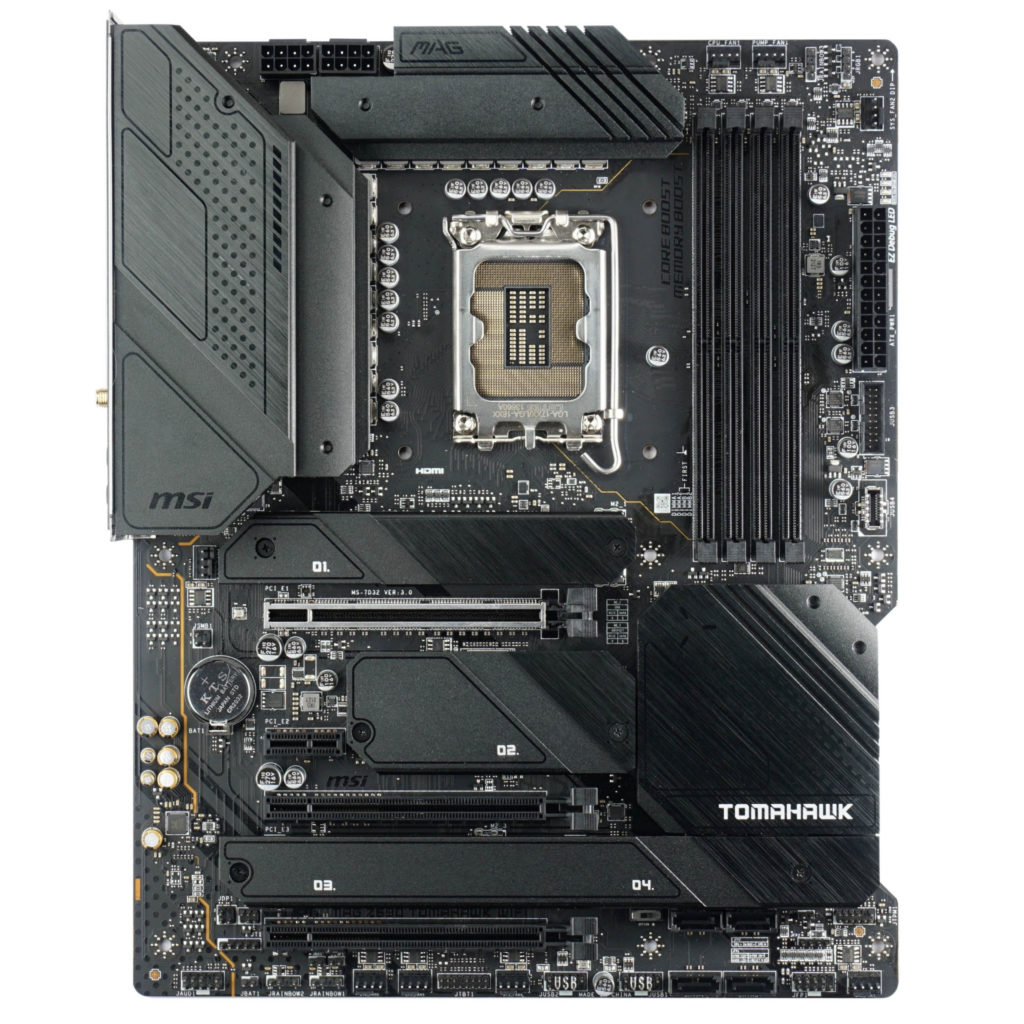 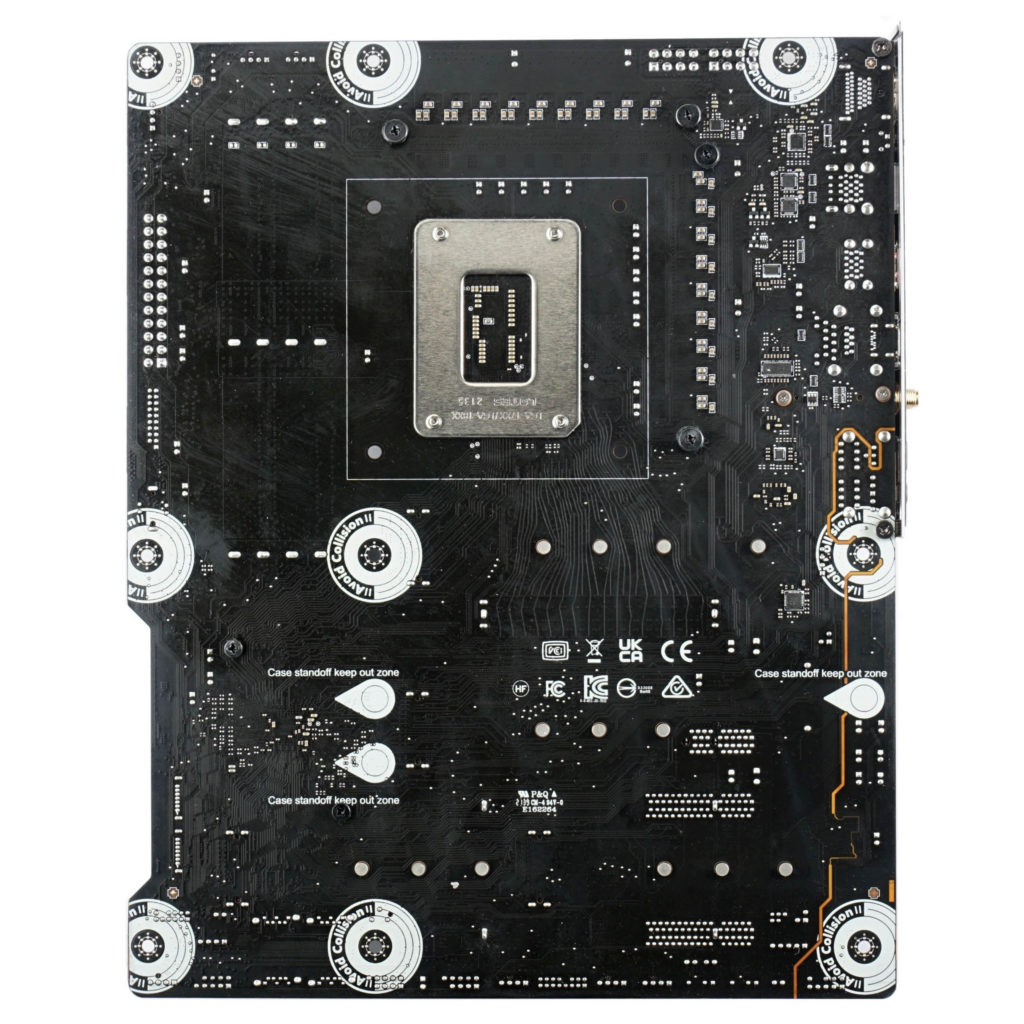 There are up to six SATA connectors, and none share a PCIe lane with the M.2 connectors, so up to ten internal storage devices can be connected in total. Six inch and four M.2 (of which one SSD can be an extra 110mm in length). Three M.2 slots have PCIe 4.0×4 support, one has half the speed (PCIe 3.0), but is still connected to the south bridge by four PCIe lanes. You already know about the inconvenient mounting of the M.2 SSDs in some positions (because the SSDs themselves are secured only by a screw in the SSD heatsink) from the previous Z690 Tomahawk DDR4 test. In these respects, both Tomahawk boards with LGA 1700 are the same.

The difference of the DDR5 variant, however, is in the voltage regulators used. Their manufacturer is still Monolithic Power, but instead of MP2128 they are equipped with MP2118, for which we could not find technical documentation. Which of the power deliveries is qualitatively more efficient is quite clear in our tests. But for now, we’ll leave you guessing. Anyway, the VRM controller (MP2120) and the number of phases (18, 16 of which are VCore) are the same as for the variant with support for DDR4 memory modules.

The VRM heatsinks are two aluminum blocks with a total weight of 425 grams. We should also highlight the efforts to achieve the most segmented surface, although it certainly could have been better (in the result with more surface area), but even so, considering the needs of the power delivery, the heatsinks have sufficient capacity even with headroom for less favorable conditions, whether due to higher ambient temperature (typically in the summer) or weaker system cooling. 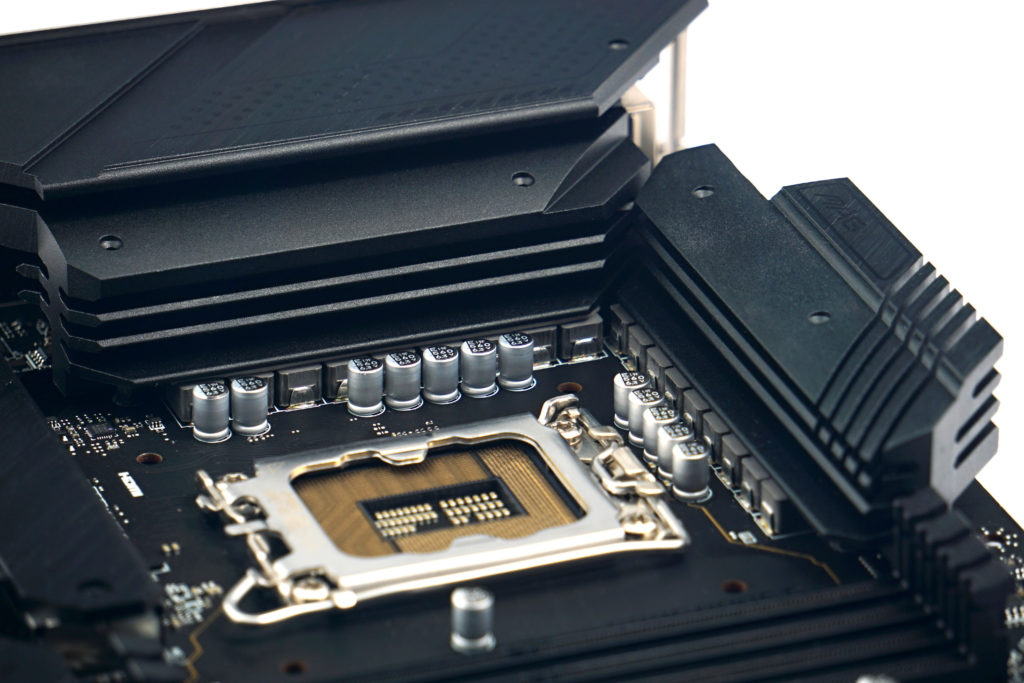 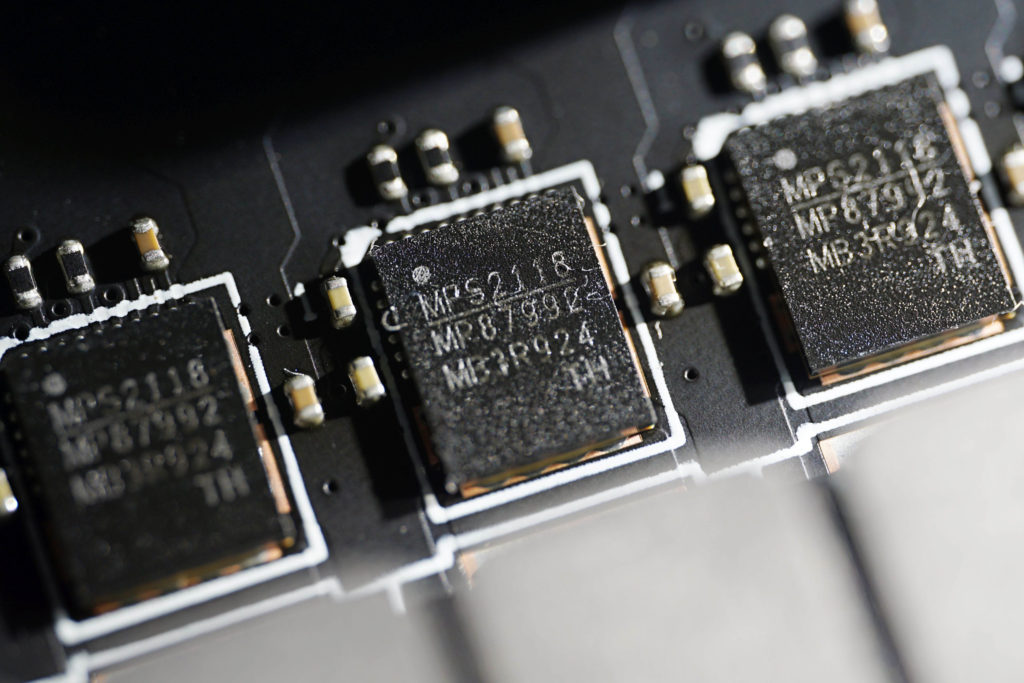 The motherboard doesn’t physically contain any RGB LED elements, but it has enough connectors to connect lighting accessories (typically fans). Three of the four are digital (3-pin 5V), one is a 12-volt 4-pin analog for backwards compatibility.

The selection of external connectors is also decent. The USB ports are super fast. Three support the 3.2 gen. 2 standard (10 Gbps) and the USB Type-C even the 3.2 gen. 2×2. This 20-gigabit interface tends to be an unwritten rule on Z690 boards, and manufacturers like to pull it out of the south bridge to the rear panel.

MSI doesn’t skimp on video outputs either, and both HDMI (2.1) and DisplayPort (1.4) are in the latest standards. On some boards where the manufacturer does not anticipate the use of iGPUs, it is customary to skimp in this regard, but this does not apply to the MSI MAG Z690 Tomahawk WiFi board. Compared to the B660 Tomahawk WiFi or the smaller Mortar boards, this one also has a BIOS update button with a marked USB port, even without a processor, which may come in handy later (after the Raptor Lake generation is released).

Continue: What it looks like in the BIOS
Flattr this!
MSI základné dosky 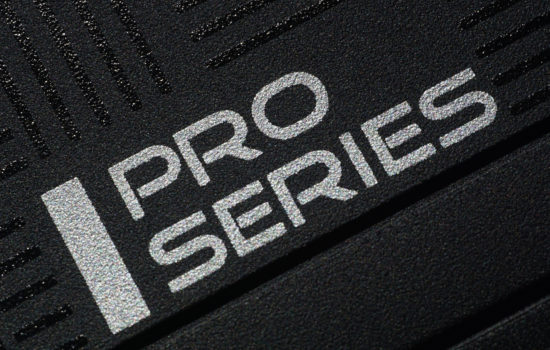 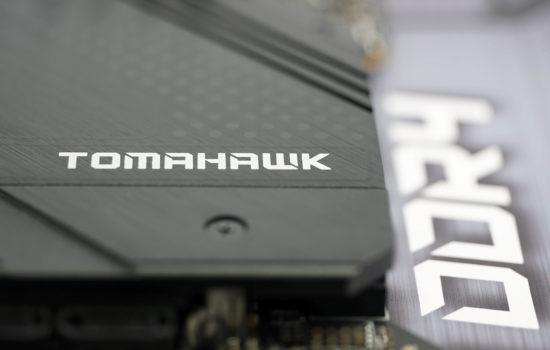 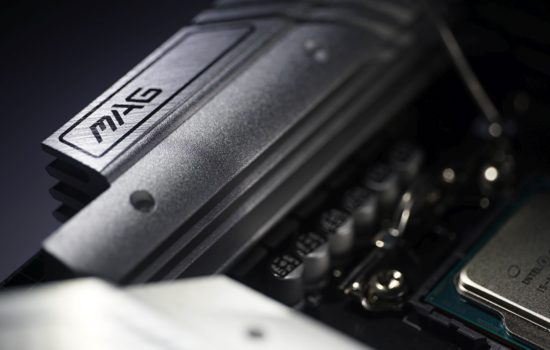