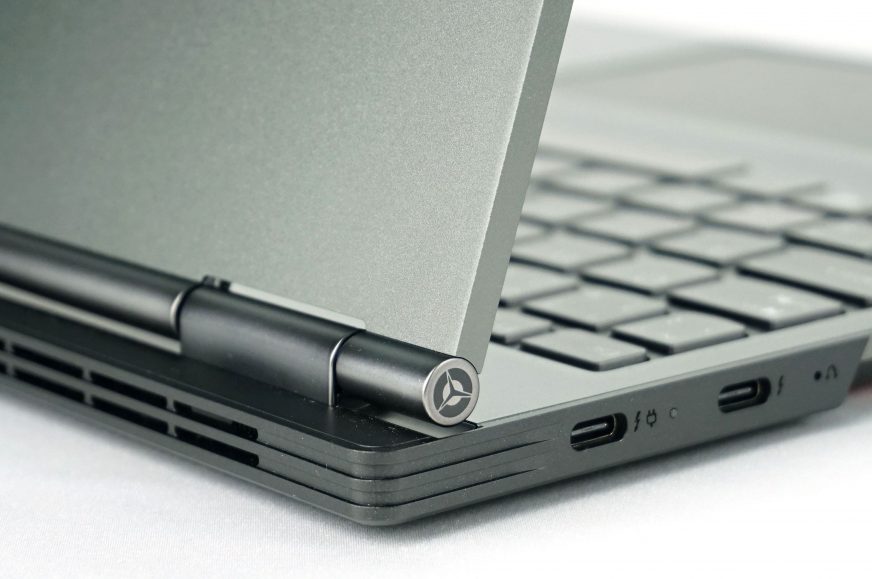 Gaming laptops in a thin body often suffer from two flaws – overheating and short battery life. What to do if you want high processor performance, but in a thin body, with good battery and at the same time not lose graphics performance when you are at home or at work? A gaming notebook with dedicated graphics card will always be heavier than an ultrabook and will not offer such battery life. On the other hand, ultrabooks lack CPU performance. The Legion Y740S resolves this dilemma.

The package of the notebook has the inscription Legion in a glossy black version on the outside, otherwise it is a regular cardboard box. 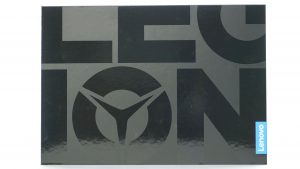 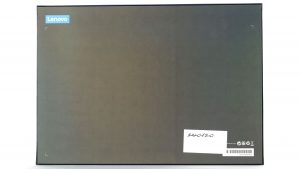 The package includes, of course, the laptop itself, a USB-C charger and documentation. 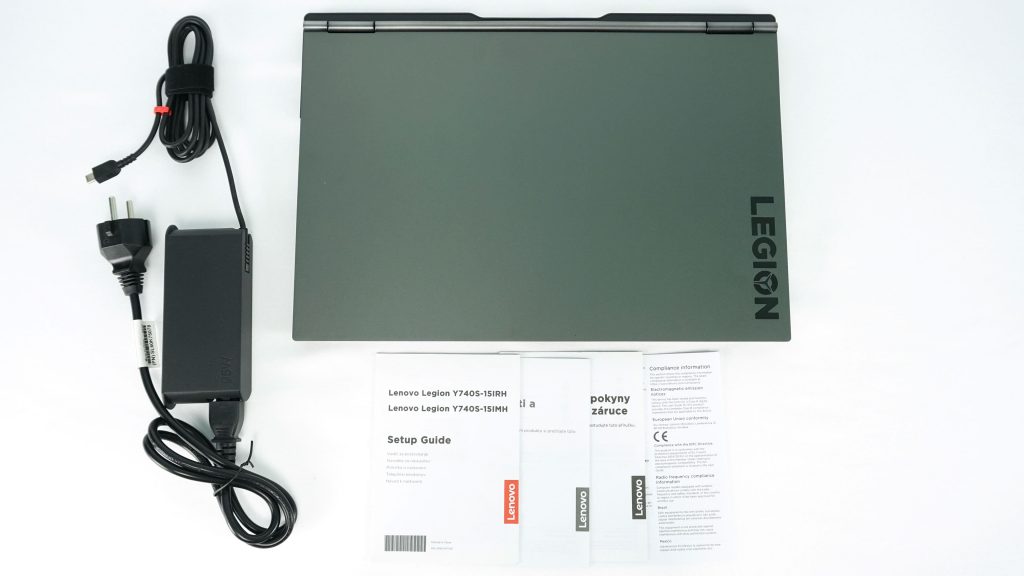 The Legion gaming brand from Lenovo is becoming more and more popular among gamers and it’s no surprise. In addition to their original design, Legion devices also offer a great price to performance ratio. The last generation also amazed me with its cooling, which was very well handled on laptops. Gaming events, where you often see Legion as the main partner, also help to build brand awareness. Personally, I already consider Legion as a capable competitor for Asus or MSI, which are more established brands of gaming laptops in our country. However, what none of these manufacturers had “balls” for was to release a gaming notebook without dedicated graphics. But that’s nonsense, you might say. But when I tell you that you can have a thin and light laptop with a long battery life on the road, and at the same time a full-featured powerful gaming machine at home or at work, it’s no longer such nonsense, is it? But how do you combine these two conflicting factors? One solution is thin gaming laptops like the recently tested MSI GS66 Stealth, where, however, the eternal fight with temperatures and battery life will not just blow you away. The Y740S went the other way with a combination of Thunderbolt 3 and eGPU. We will talk more about this principle in a separate chapter. 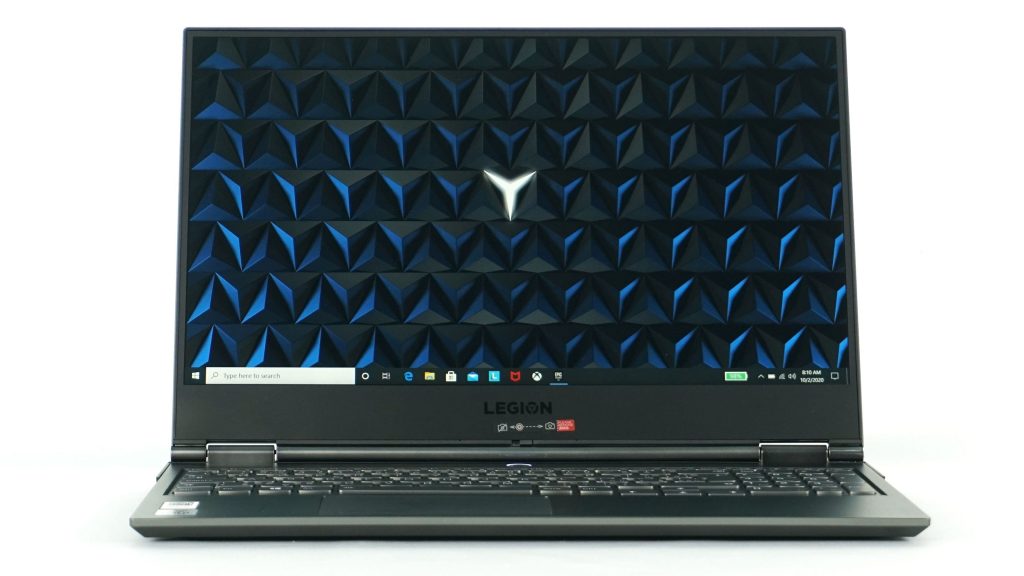 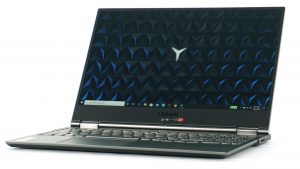 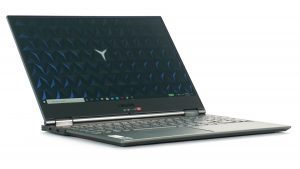 The Legion Y740S has many design elements in common with its siblings 7i and 5i, that we saw at the presentation in June. The gray variant with slightly pushed forward display hinges looks modern and elegant. The notebook does not yell its gaming DNA in any significant way, perhaps except for the backlit Legion logo on the display lid. The Y740S is thus also intended for work use, where purely gaming machines may not be sufficiently representative. But enough about the design, the interior is also important. There are three configurations to choose from, with the 10th generation Core i5/i7/i9, 16/32 GB RAM, 512GB/1TB/2TB SSD and Full HD/4K display. We are testing a medium piece, i.e. a model with Ci7/16GB/1TB/Full HD. 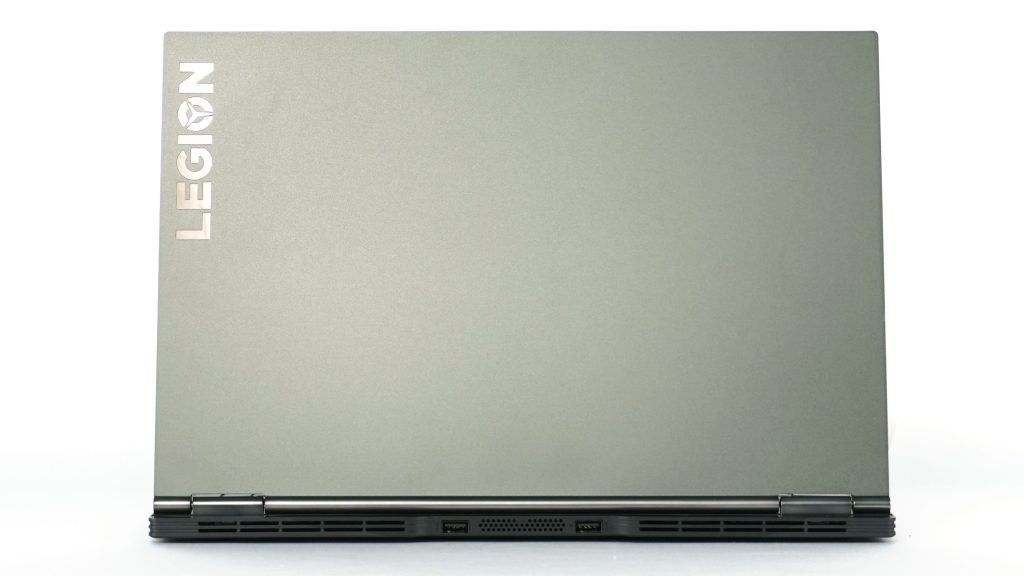 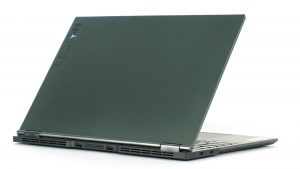 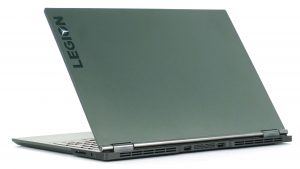 The exterior and port selection is the same for all models, so let’s take a look at it. The side view reveals the ultra-thin 15 mm body we see in ultrabooks rather than gaming machines. The right side has an SD card reader and an audio jack, i.e. ports that are gradually disappearing from laptops. If you need them for work, the Y740S is the right candidate for you. On the left side there is a pair of USB-C ports, both ports supporting Thunderbolt 3 for charging, video output, or connecting other TB3 accessories such as fast external drives or eGPU docks. 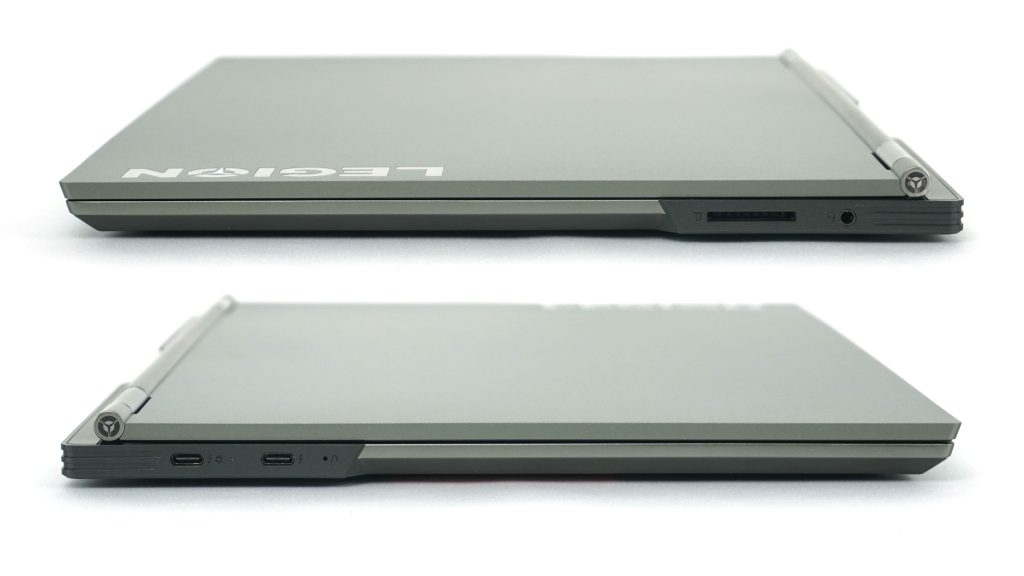 It’s hard to imagine praising thickness based on numbers, so let’s look at a comparison with the GS66 and OMEN 15 we’ve tested recently. The difference in thickness and weight of the devices is enormous. 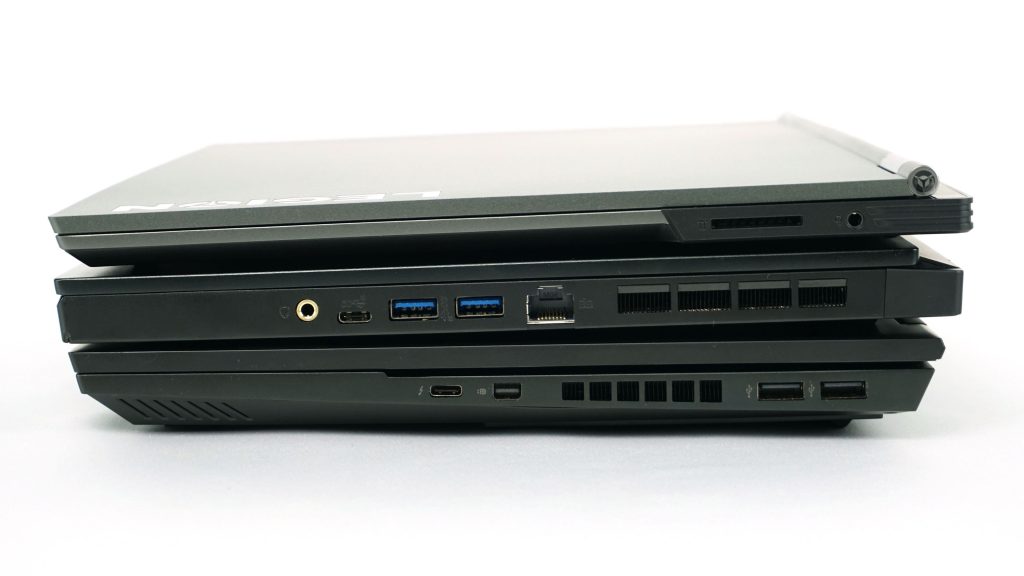 However, the port selection does not end with connectors on the sides of the device, as it might seem at first glance. Still, relying on a pair of USB-C ports is a bit of an “Apple” approach, which would mean having to carry adapters everywhere. Fortunately, they didn’t do such nonsense in Lenovo, so on the back you will find a pair of 10 Gb USB 3.2 gen 2 ports of the classic type A. One of them even supports fast charging, e.g. for your smartphone. 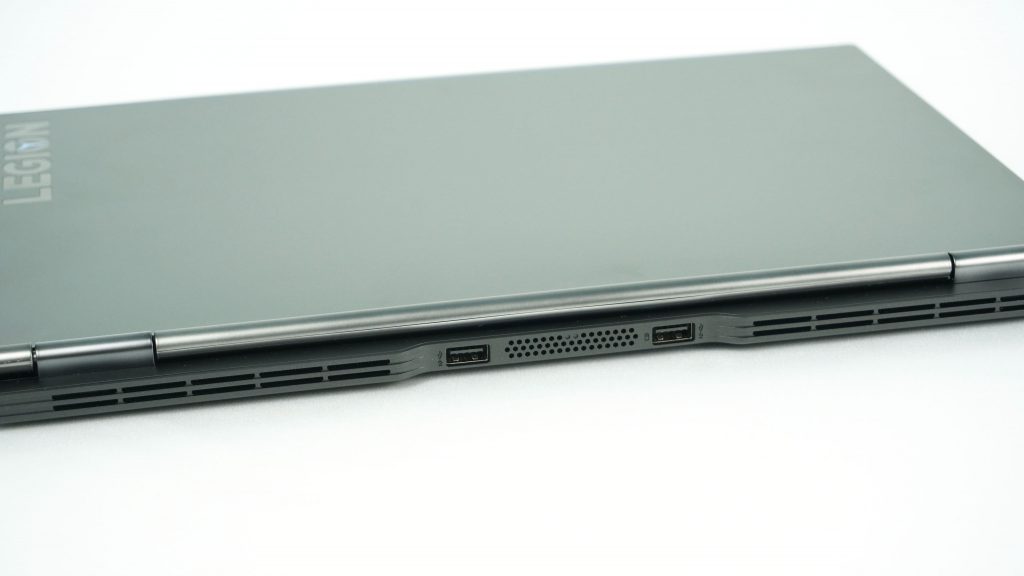 You will not find any more ports or control elements in the front. 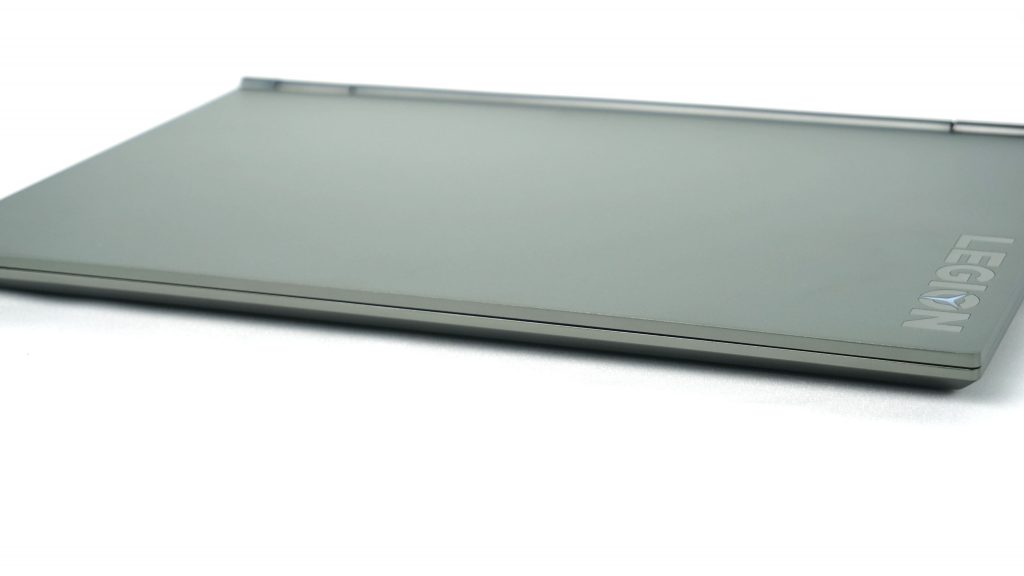 The top view shows us a gray lid with a backlit logo again and a black bottom cover. It has a perforation along its entire width for sufficient air access to the fans. 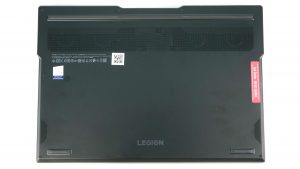 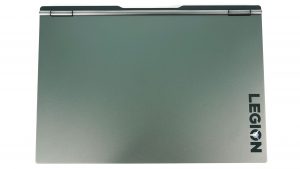 It’s interesting that the bottom cover has heat conductive pads in place of the SSD for better heat distribution. The black design is not very practical, it captures fingerprints very easily, which are then difficult to clean.

The tested configuration offers medium equipment of the Y740S and thus an Intel Core i7-10750H processor with 6 cores and a clock speed of up to 5.0 GHz for 1 core or 4.3 GHz for all-core turbo. The standard is already 16 GB RAM, which has a speed of 2933 MHz and is non-removable. If you want 32 GB, you will have to reach for an 8-core version with the Core i9-10980HK. The middle configuration offers 1 TB SSD, the higher one up to 2 TB. In contrast, the lowest configuration is the Core i5-10300H with 4 cores and 512 GB of storage. RAM is 16 GB, just like with our model. The difference between the configurations is also with the used display, the base and medium have a 300 nit 60 Hz Full HD display with 72% NTSC coverage. The highest configuration got 4K, 600 nits and 100% Adobe RGB along with DisplayHDR400. This is probably the first time that I would recommend reaching for a 4K display in a laptop and thus for the highest configuration. 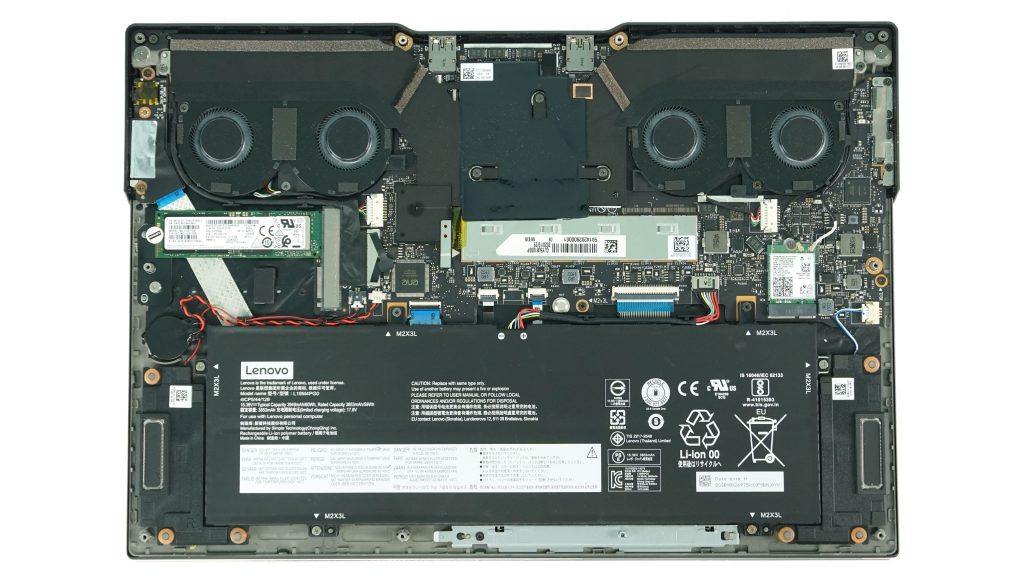 Looking inside, we see that the SSD and WiFi card are interchangeable. The second free slot in our configuration will be especially pleasing, but I assume that the Core i9 model with a 2 TB SSD will have both slots full. Theoretically, however, you can install your own SSD and get up to 4 TB of capacity using both slots. You will hardly change the WiFi card in the near future as it supports WiFi 6 802.11ax. 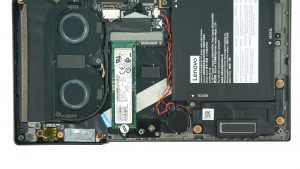 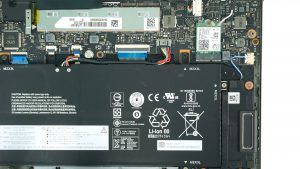 Interesting is also the design of cooling, which uses a vapor chamber and up to four smaller fans for cooling the processor. The manufacturer refers to the cooling system as Coldfront 2.0 and talks about its very quiet operation. 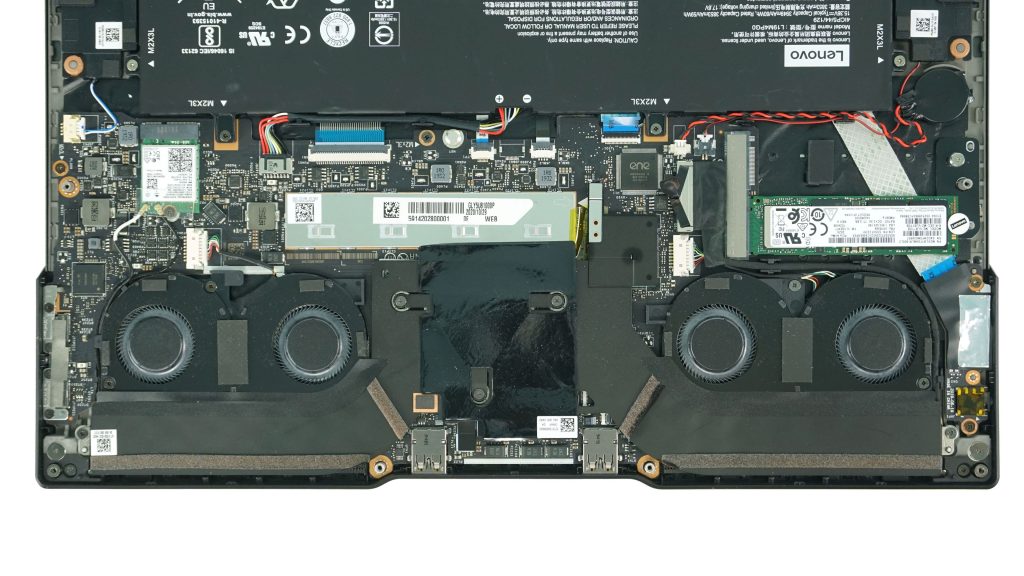 Opening the lid is possible up to a straight angle, i.e. to the plane with the base, which is my favorite feature of Lenovo laptops and I was pleased that it is not missing here either.

The keyboard is always a strength of Lenovo laptops, especially when it comes to business ThinkPads. The Y740S got a very similar keyboard to what you would see in its siblings in suits. The shape of the keys and the layout are practically identical, but the keys are not black but gray.

Pleasing is also the white backlight, which is again decent and does not need to glow of RGB colors like crazy, as is customary with gaming laptops. I have no reservations about the resolution, response time or other aspects, I am fully satisfied. However, it will be due to the fact that I myself had used ThinkPads for quite some time and I’m used to such a keyboard. 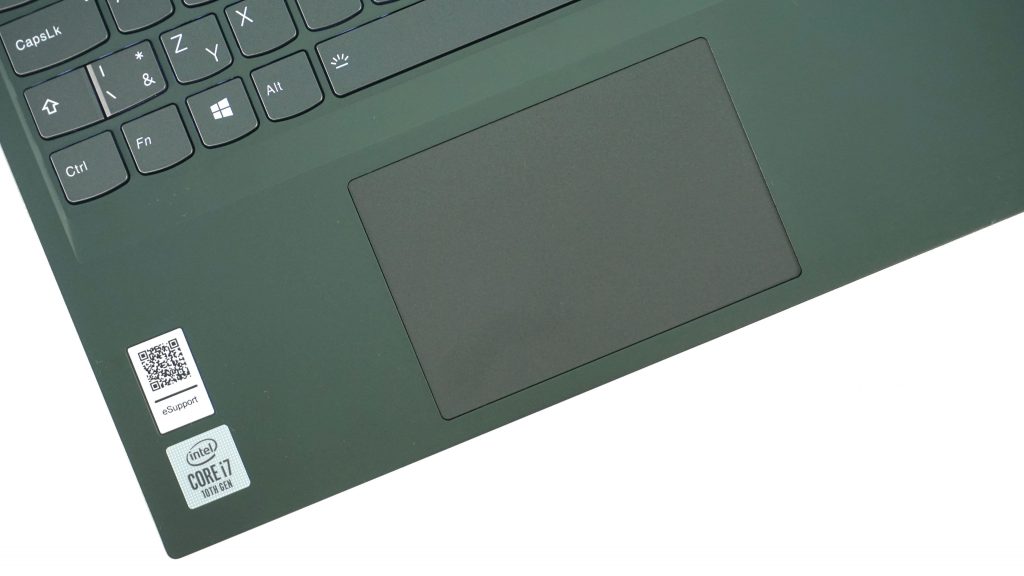 On the contrary, the touchpad didn’t really grab my attention. Not saying it’s especially bad, the glass surface is nice, the gestures also work well, but it’s nothing that would make my jaw drop. It is very difficult to press in the upper third, almost impossible and the dimensions could also be larger. However, the truth is that it’s hard to compare anything to the touchpad on the MacBook Pro, which I’m currently used to. 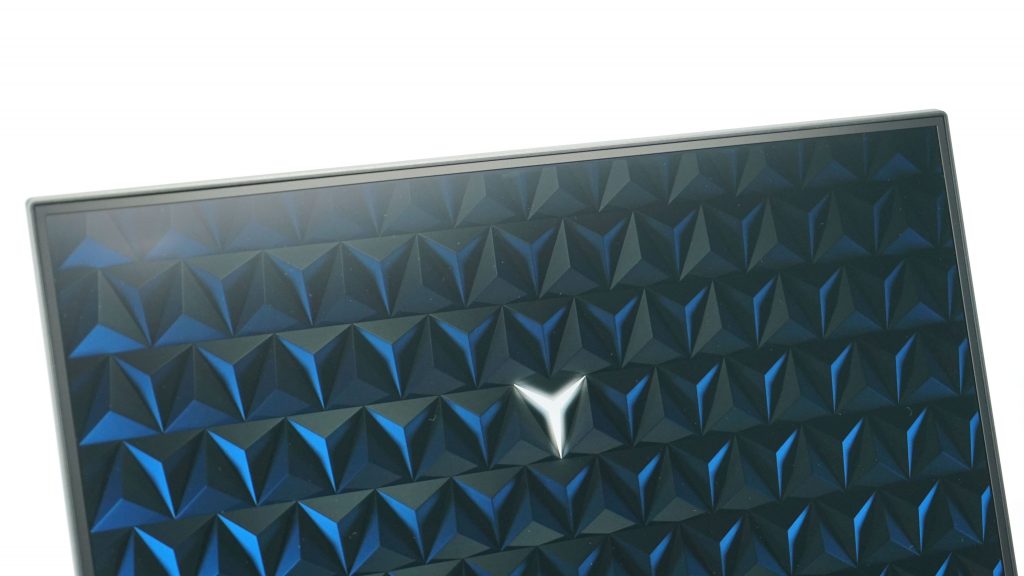 When looking at the top edge of the display, we see only a thin frame, the same as on both sides of the display. Where did the camera go? Is it absent as with the new Asus ROG laptops? No, it was just moved under the display to the so-called chin. In addition, it is equipped with a cover that you can use to cover it to prevent anyone from watching you. Again, this is a solution that is known from ThinkPads and I praise its use on Legion. The quality of the camera is the same as always, i.e. 720p with an image significantly worse than that offered by cheap smartphones. The camera does not offer face recognition, as was the case with the MSI GS66, but the Y740S did not completely lose its biometric security. The fingerprint reader is hidden in the power button, for which I’m giving a thumbs up.

Only 15 mm thickness and compact dimensions had to be reflected somewhere and the battery capacity was the target. 60 Wh is the value we see with 13–14″ ultrabooks, so the capacity is disappointing. The GS66 from MSI has been mentioned many times before. It has up to 99.9 Wh battery. However, what the GS66 doesn’t have is USB-C charging with a 95 W charger. We don’t normally see USB-C in gaming laptops, as it is limited to a maximum power of 100 W when charging, which is not enough to power gaming graphics cards, and since the Y740S does not have dedicated graphics, USB-C will suffice. 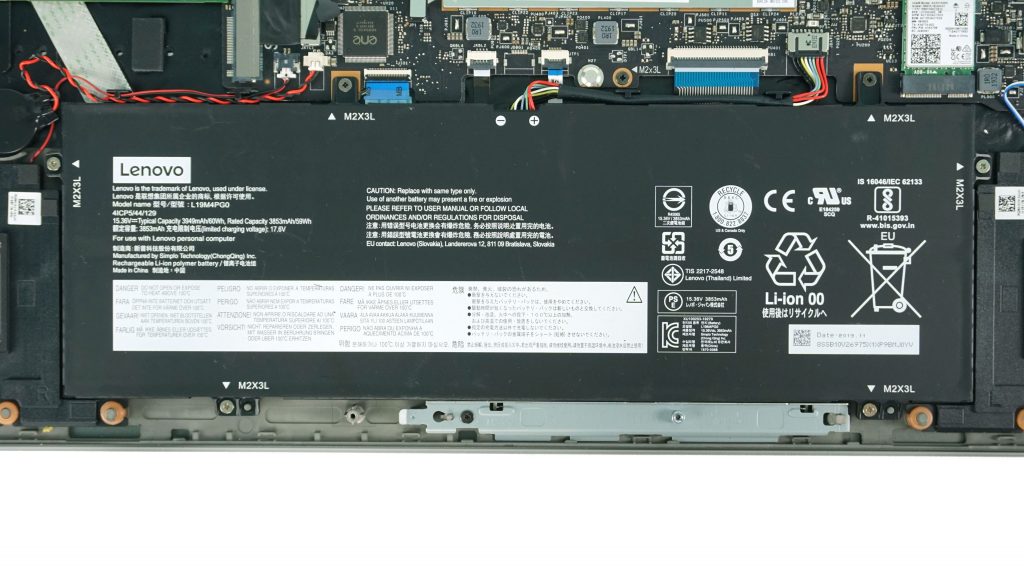 After an hour of charging, you reach 76% and a full charge takes 1 hour and 50 minutes. In addition, you can turn on fast charging in the Lenovo Vantage application, which achieves slightly better results. After an hour you will get to 86% and the total charge will be shortened by about 5–10 minutes. The 95 W charger has relatively compact dimensions, which you will definitely appreciate when traveling.

Although the battery is smaller than expected and a 45 W processor needs to be powered, its battery life is very good. In our demanding test on YouTube, we achieved 5 hours and 11 minutes, which is above average for a “gaming” laptop. However, we really don’t have much to compare it with, as we haven’t tested an H-series processor without dedicated graphics yet and you won’t even find such a concept elsewhere. Compared to gaming laptops with dGPU, although they use Optimus, may not be completely fair, on the contrary, ultrabooks have less power-thirsty 15 W processors that do not need as much. Personally, I consider the result to be very good, but of course due to the capacity of the battery, more could not be expected.