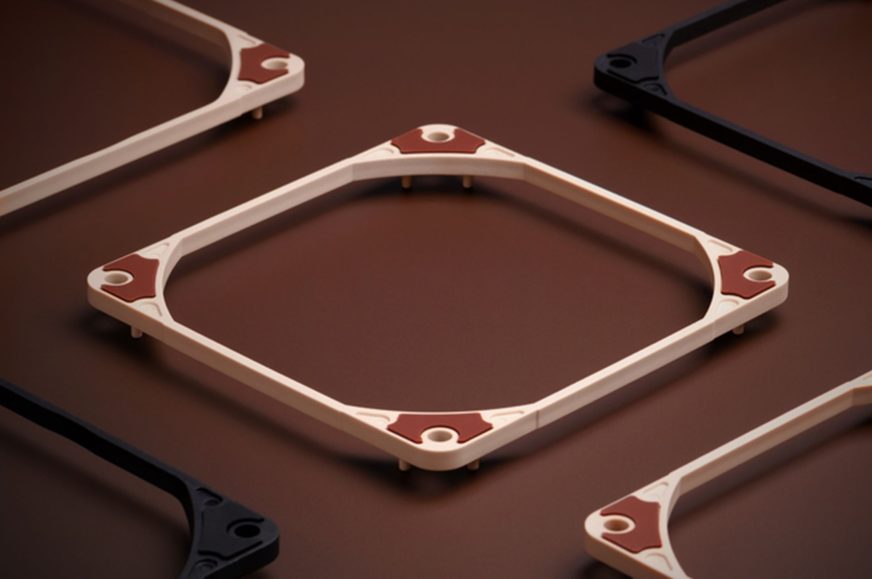 Simple but clever. The Noctua NA-IS1-1x supplementary frames are an extension to the existing fan frames, which provide greater clearance from an obstacle, thus mitigating microturbulence, which naturally reduces the noise level of the entire cooling system. To what extent, you’ll find out later from our tests, for now let’s take a look at what it’s actually all about and how it all works.

With this, Noctua has once again made its mark. With the new frames, it has shown that it has the best relationship to aerodynamic details of all computer fan manufacturers. The NA-IS1 frames that Noctua has released are a unique and most importantly extremely useful fan accessory. 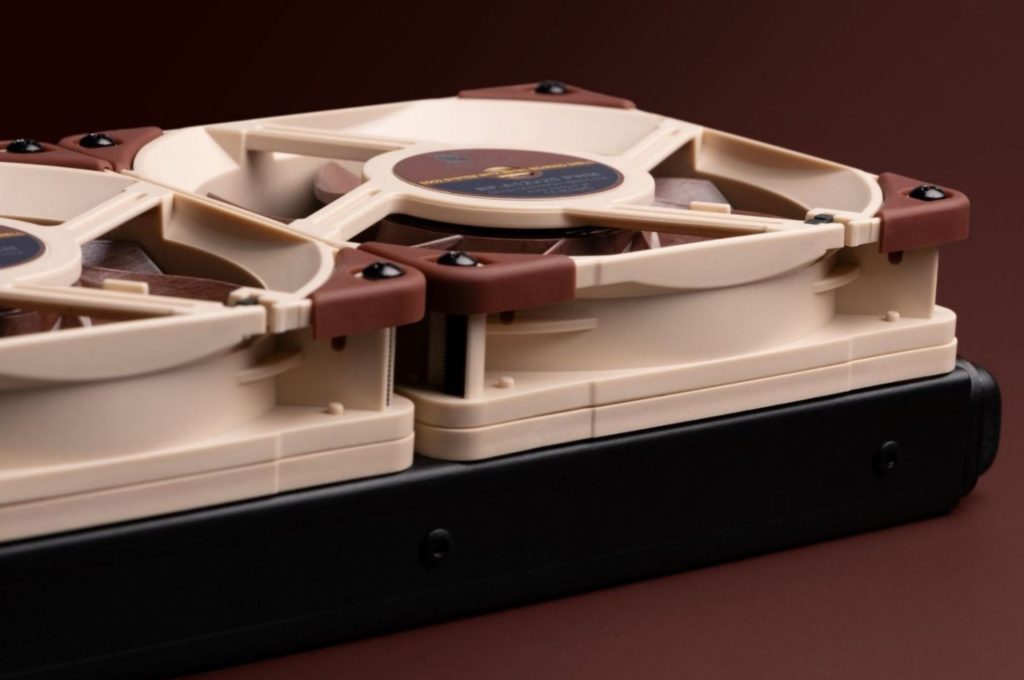 It is essentially a short tunnel that moves the fan away from an obstacle by 5 mm. Installing this tunnel only makes sense on the intake side, i.e. in applications where there is an obstacle in front of the rotor, which is often various grilles, but also computer case filters and sometimes even liquid cooler radiators. Any restrictive obstacle with sharp edges in close proximity in front of the rotor generates massive microturbulence, due to which noise increases significantly. 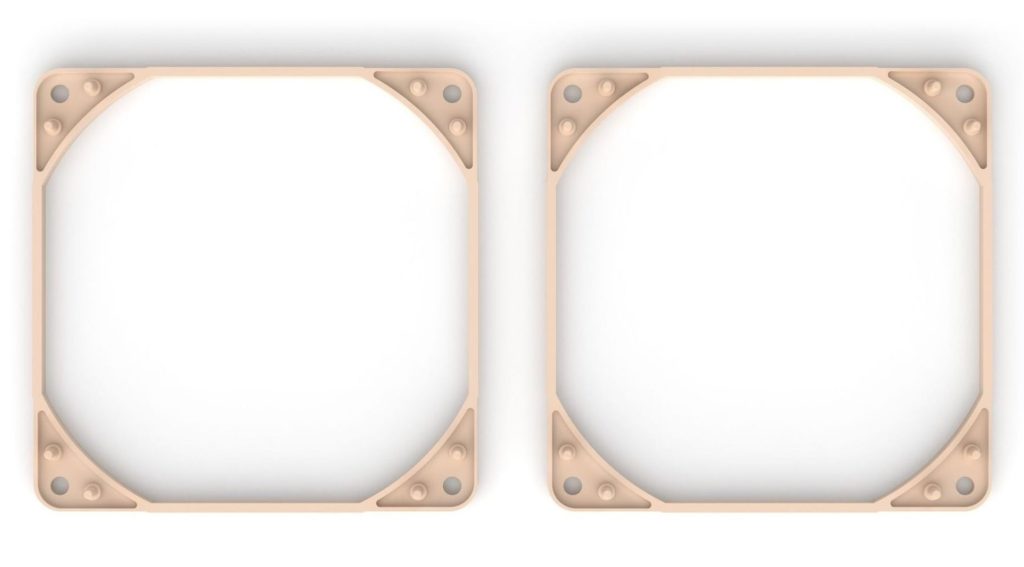 The further the rotor is from the obstacle, the less turbulence there is and the lower the noise. And this is exactly what the NA-IS1 frames are designed to do, increase cooling efficiency. They do this primarily by reducing noise, in which context Noctua quotes 2 dBA. We are talking about a kind of “average”. It is not possible to specify too much of an improvement in a single number here, as the result must reflect the possibilities of use on different fans at different speeds and, of course, on different obstacles. In addition to the noise reduction, Noctua also reports an increase in fan performance, airflow. On the other hand, in order to avoid performance drops (and no pressure loss over longer distances), the external frames must fit perfectly with the internal ones, which Noctua, we assume, has done well.

For the same reasons we stated above, this is again some “average” increase, which Noctua puts at 4.4 m3/h. But how is it possible that the airflow is increased even if the blockage rate of the obstacle (e.g., a grille) is not changed? Again, this is related to the reduction of microturbulence.

When receded (by that 5mm), the fan is driven by a less turbulent airflow, so the rotor can rotate at a slightly higher speed. This is why a higher airflow is achieved while reducing noise. One of the few fans to see an increase in noise (1.5 dBA) with the NA-IS1 on a hexagonal grille is the NF-A14s redux, but it also achieves the highest increase in airflow – up to 38% in Noctua’s tests. The NF-P12 redux also has a significant airflow increase with NA-IS1 in this environment (on a honeycomb-shaped grille), even over liquid cooler radiators, of over 11 %. 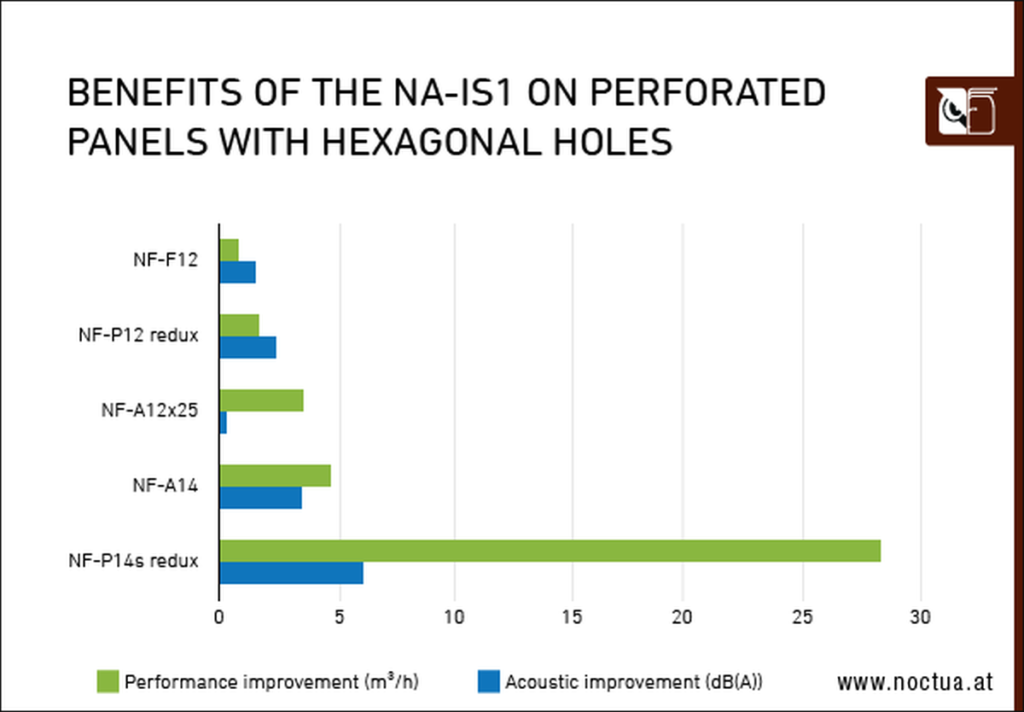 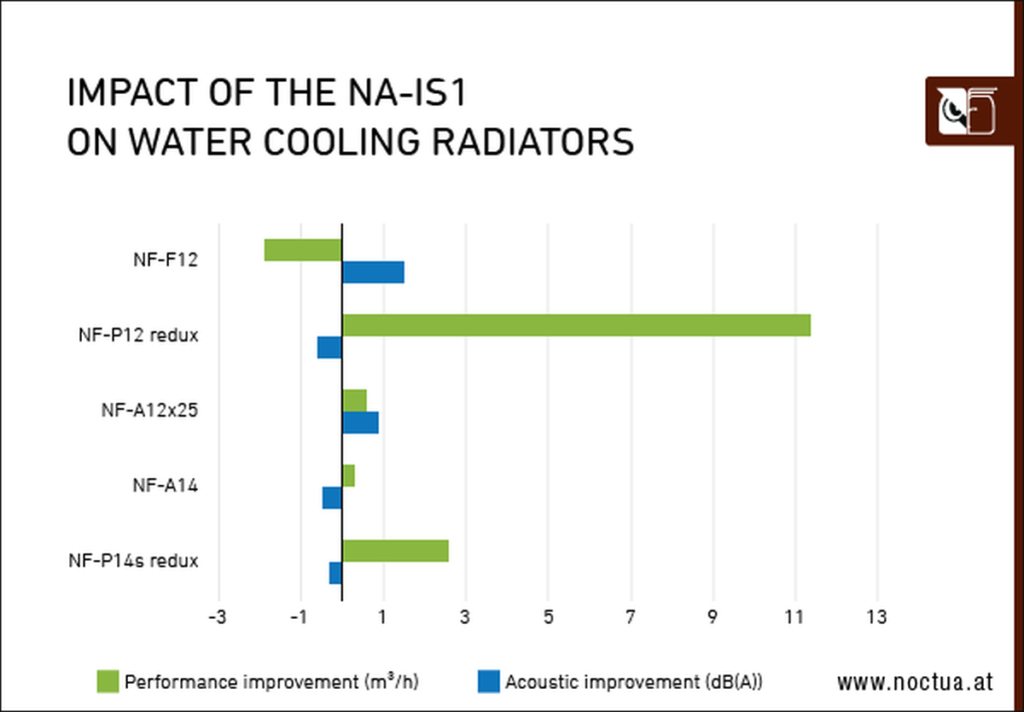 Noctua’s internal tests also looked at the difference in noise at different sound frequencies. In the 500–5000 Hz band, where the aerodynamic sound of airflow through a finer perforated plastic/metal screen is more prominent, Noctua illustrates that the NA-IS1 reduces the frequency peaks of the NF-A12x25 fan, in addition to the average decrease in noise in the spectrograph. 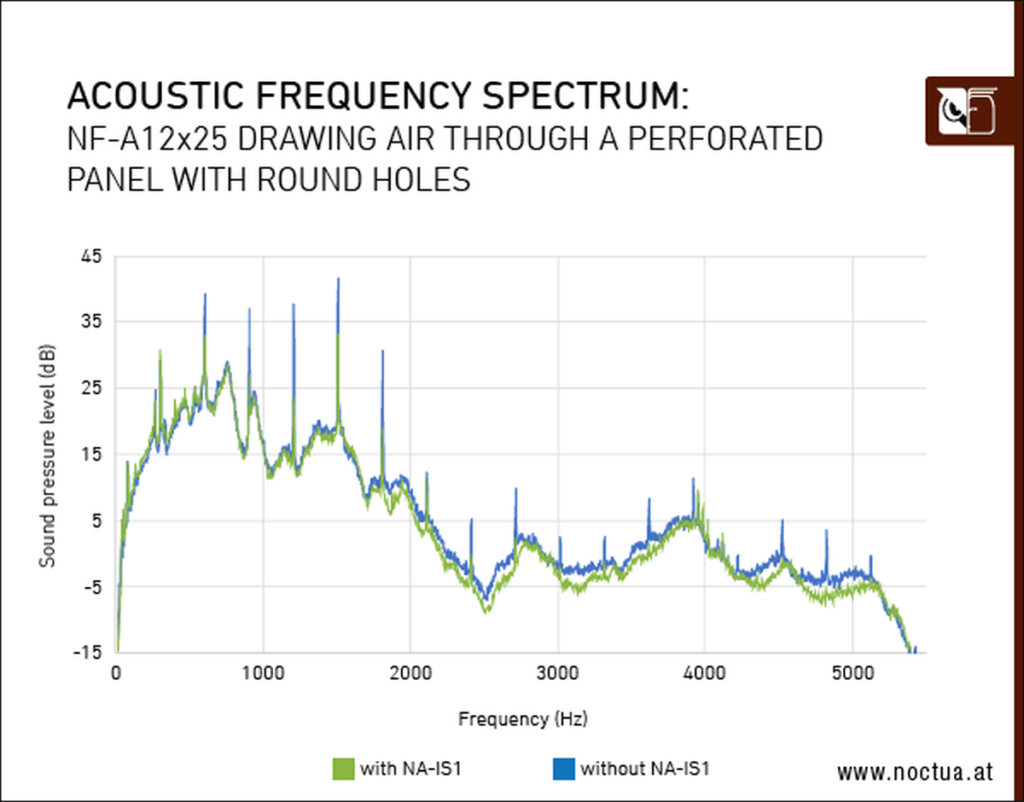 NA-IS1 frames are available in two formats, for 120 mm (NA-IS1-12 Sx2) and for 140 mm (NA-IS1-14 Sx2) fans. Noctua fans that are 25 mm thick are supported, but they have to have holes in the mounting corners for the NA-AVP1 anti-vibration pads. These are almost all Noctua fans, but do not include older ones (such as the NF-P12 and some NF-P12-redux, pre-2018 batches) or the low-profile NF-A12x15 fan. Due to incompatibility of mounting holes, the frames will not fit other manufacturers’ fans either.

Included with the NA-IS1 is mounting material that accounts for the increase in thickness. In cases (supplied are longer self-tapping screws, but also NA-AV3 rubber spikes) as well as on radiators. For these, two sets of elongated screws with both M3 and UNC 6-32 threads are available. There are two colour choices NA-IS1 – traditional brown-beige and black (chromax.black). The recommended price regardless of format and colour is 14.90 EUR. For that money, the frames are already in stock on Amazon, for example, and there’s always a pair in the pack. That is, two frames and eight pieces of fasteners of each kind.

You already know the silicone gasket from the Noctua NF-A12x25 fan accessories. Its role is to seal the gaps on the sides, which somewhat reduce the static pressure (and therefore the airflow through the obstacle). 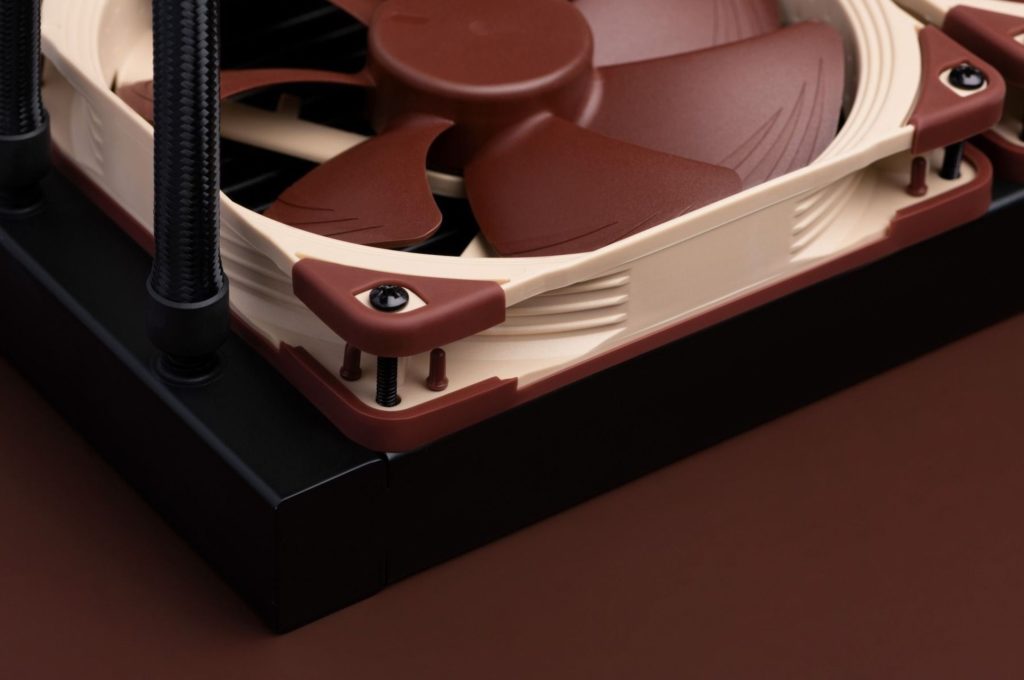 This gasket is installed in the same way as the corner anti-vibration pads (which, by the way, this gasket has in it). NA-SAVG2 (chromax.black), as Noctua refers to this gasket, is also immediately available at a retail price of 9.90 EUR in both brown and beige and black variants. One package contains three pieces of these all-round seals. 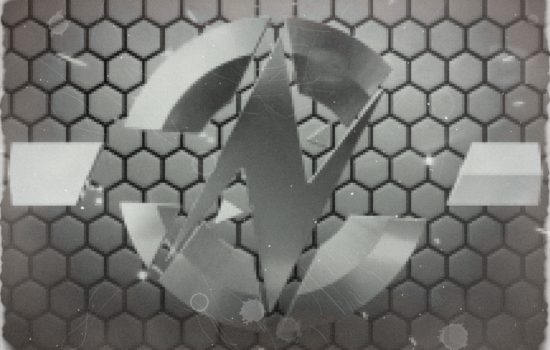 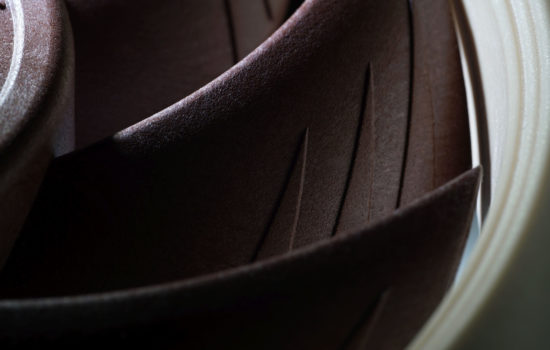 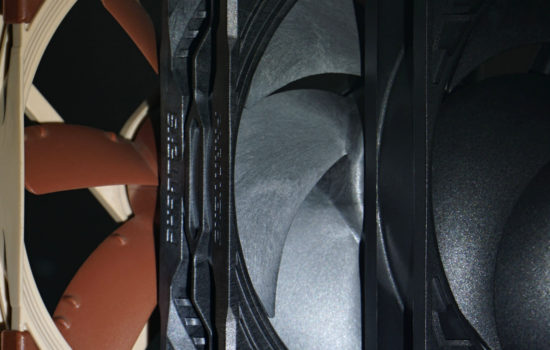