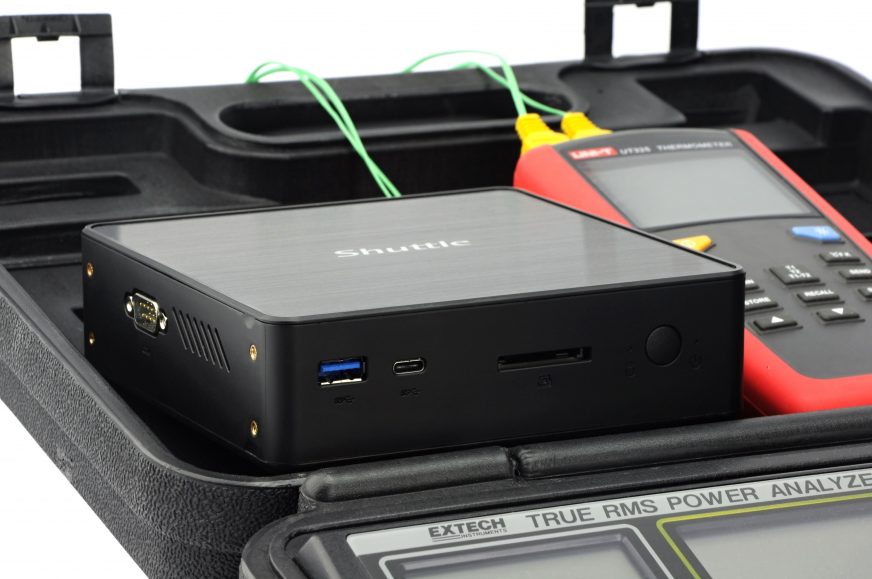 A powerful energy-efficient processor makes this barebone optimal for a more demanding office or for multimedia. Its format is minimalistic, which in other words always means a challenge that is often accompanied by various compromises. Nearly hundreds of measurements can tell you more about how the Taiwanese manufacturer managed to create simple but effective design. We also included tests without a fan.

The shell is plastic. A more elegant touch is provided by a lid with a thin covering made of abrasive aluminum. The casing is closed, there are just grids with small vents on the sides. We have no reservations about the quality of the workmanship. Tracing is flawless, everything is made just right.

Ports are on three sides. There are two USB connectors at the front (3.1 gen 1 type A and 3.1 gen 2 type C) and two (2.0) at the rear. They are quite close to each other so you cannot connect anything next to a device with a wider connector, but it is just fine for mouse and keyboard. What is not fine is the number of USB inputs, which is similar to laptops. A desktop computer often requires more permanently connected devices.

In addition to the power button, there is also the SDxC reader available at the front. At the back is HDMI, DisplayPort, RJ-45 1 Gb network, and a shared 3.5mm jack. At the side is a serial port (COM) allowing a connection of a cash register, for example. But not if you want to have the case in the vertical position – there are holes for metal racks on this panel as well. It is a shame that this connector is not on the opposite side that is basically empty. 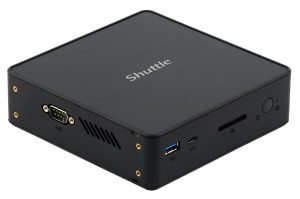 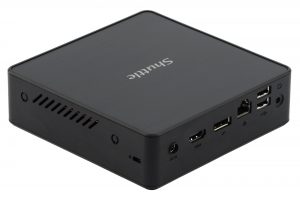 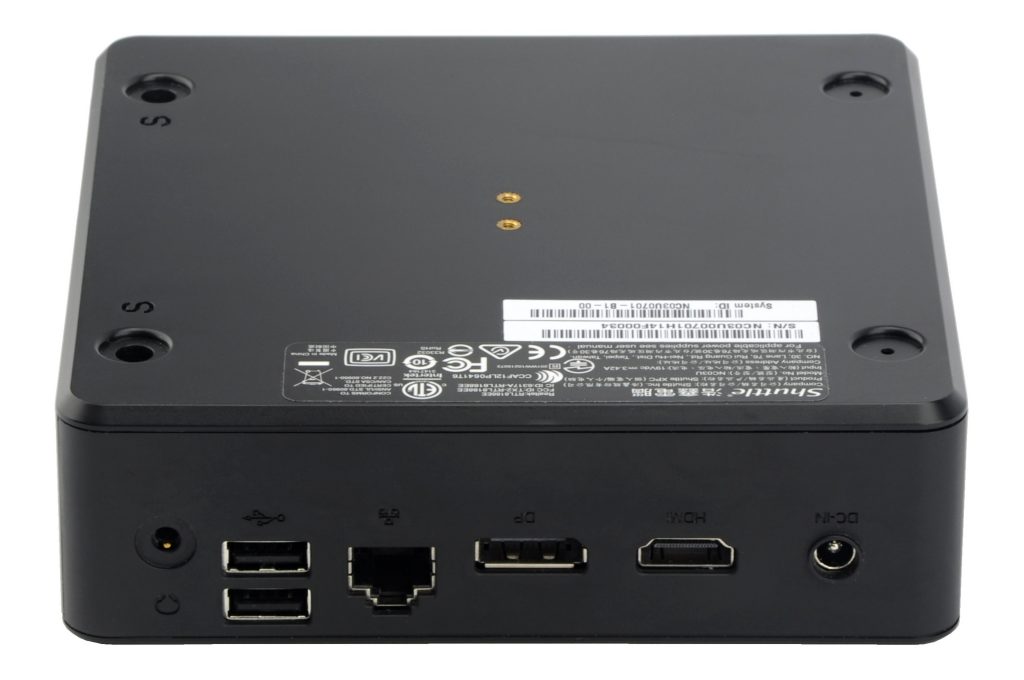 Mounting holes are also on the lower cover. These are meant for the VESA holder (100 × 100 mm) which allows the computer to be attached to a monitor or a wall. It is also a gateway to the interior.

You can reach the components by removing two screws that are under the position for adhesive feet. After dismantling, there is a view of the board with double-sided PCB. The first visible is the backside with VRM set (SinoPower SM4373NA CSB6L). They are courageously “exposed“ and the fan does not blow on them. At maximum heating, SinoPower indicates 100 °C. In addition, there is a wireless network module and also one of two RAM slots on this side. 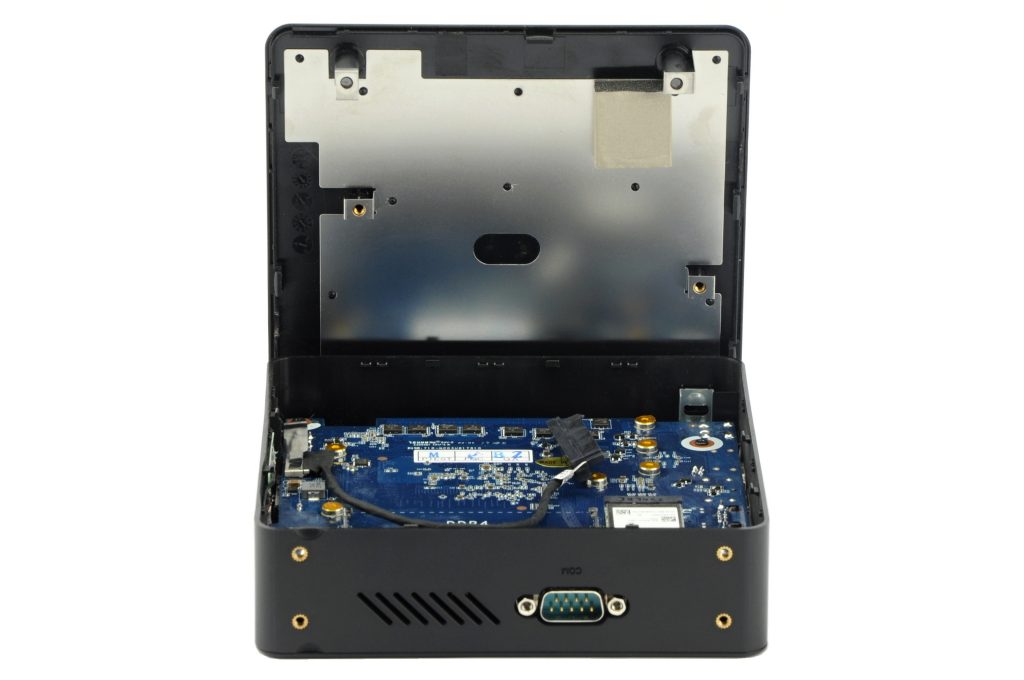 The other side of the board is richer. Above the processor is a simple cooler. Using a flat heatpipe, it transfers the heat to a (apparently steel) heatspreader and especially to a small radiator at the outtake. On the surface of the HS are remarkable small projection for better heat dissipation. 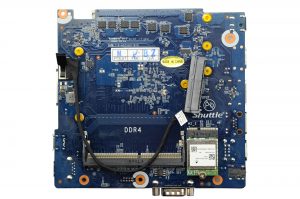 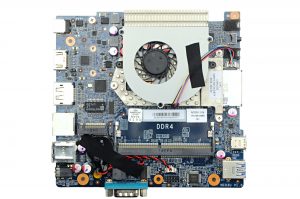 Airflow is maintained by a 7 mm thin and 40 mm wide axial fan. It is connected via the PWM connector and you can choose one of five preset control modes in the BIOS. For a common use, the most suitable is the “smart” mode. If you prefer quiet operation at the expense of higher temperatures, you can switch to “ultra-low”. At critical temperatures, however, it also climbs to max. speed – very noisy 6250 rpm.

The common “low” is not so quiet, it runs at 4000 rpm even in idle, “medium” is about 4500 rpm, and “full” is obviously full speed. This could be useful in some specific environment like a workplace with high ambient temperatures.

Next to the processor is the second SO-DIMM slot. The controller (IMC) can handle both DDR4 and DDR3L. The condition is a low voltage (up to 1.2 V). M.2 slot is also included and with full compatibility so SSD with any length is supported. 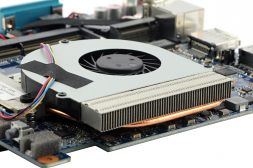 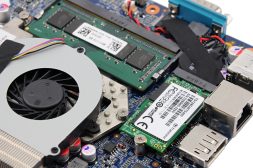 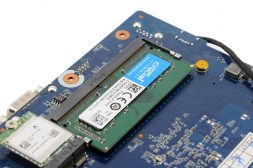 The support of the 2.5-inch disk has also been retained, which is first attached to a frame (but when using HDD, vibrations will be transmitted directly to a pad) and then the frame is screwed to the removable cover.

Watch out for the SATA connector, especially during disassembly. You can easily damage the contacts because it is quite fragile. You should be also cautious around the internal Wi-Fi receiver. It hinders when you are trying to remove the board and when closing the case. 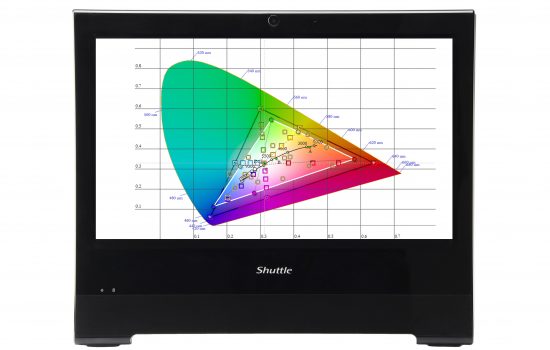