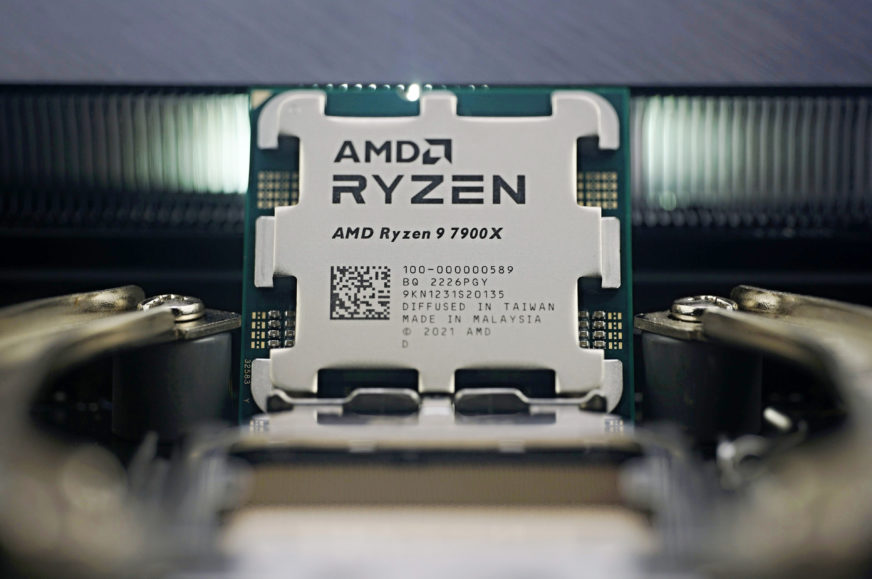 More aggressive power limits? Okay, but at a higher efficiency than Intel can do, AMD told itself while working on the Ryzen 7000 processors. And that’s how it really is, despite record-high clock speeds that are truly unusual for a new, unrefined manufacturing node. If this is just the beginning… In any case, not everything is rosy and AMD’s new processors have downsides that will need to be addressed in the future.

AMD Ryzen 7000 processors bring a new manufacturing node, a new architecture and a new platform over the previous generation. The Raphael codenamed models, of which we’ll now be testing the Ryzen 9 7900X, are made from chiplets. The I/O chiplet containing the connectivity and memory controller is manufactured by TSMC’s 6nm process (N5).

Processors with eight or six cores use a single chiplet (CCD), and processors with 12 and 16 cores have two. This basic build is unchanged from the Ryzen 5000, but the cooling is significantly more demanding. That’s due to the reduction in chiplet area with CPU cores, from 80.7 mm2 to 71 mm2. While this is not a significant reduction (it is still “only” 12 %), there is a significant increase in TDP on top of it. For the same power draw, the increase in temperatures is quite small, but when you add in the significantly higher power draw, cooling Ryzen 7000s below 95°C is a challenge even with powerful coolers (if they are to be quiet). The higher end Ryzen 9 models have a TDP of 170 W and the PPT figure has risen to 230 W (so 11 W below the PL2 of the “K” Core i9 Alder Lake).

The main update is the new Zen 4 architecture. This is developed as an evolutionary improvement on the Zen 3 core, which was the new architecture. AMD uses a sort of two-step cycle in this, where one architecture is always new and the next one then builds on it, only to have a more significant rebuild come along again. The next significantly new architecture will be Zen 5, from which in turn the evolutionarily improved Zen 6 will be derived. According to AMD, Zen 4 has on average 13 % better IPC (performance at identical clock frequency) than Zen 3. However, the increase in IPC may be different in each application, as the percentage is based on the geometric mean of the selected tasks. 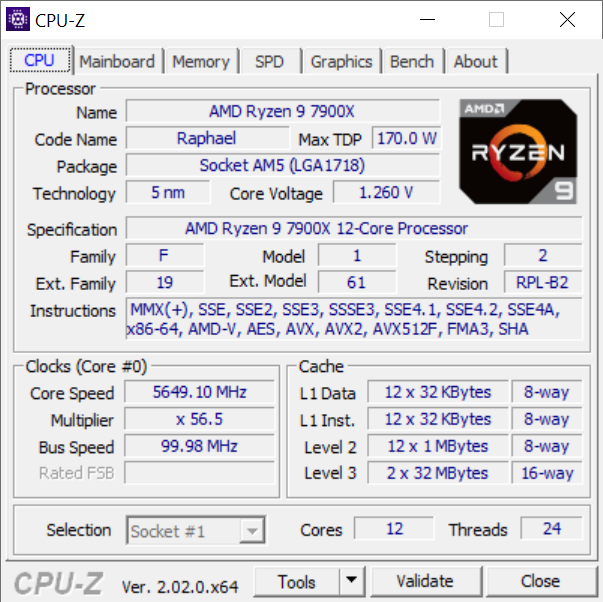 AMD hasn’t specified what the exact changes to the architecture are yet. We covered what is known in this article. For example, the uOP cache in the core has been increased, and perhaps the most noticeable change is the 1-megabyte L2 cache (compared to Zen 1 to 3, this is double their capacity).

A big factor in the improvement of the final performance are especially the clock speeds, which shoot upwards really dramatically. The Ryzen 9’s all-core boost in games even at lower (typically gaming) workloads exceeds 5.4 GHz, which puts it 800MHz above its predecessor (Ryzen 9 5900X) as well as the single-core boost at 5.6 GHz. With that one, AMD also breaks through the ceiling very significantly. For comparison, the Core i9-11900K, as the processor with the second fastest ST boost, achieves 300 MHz less. The speed increase of the Ryzen 9 7900X (and the Ryzen 7000 overall) is thus noticeable even in activities that use the performance of only one core at a time.

The Zen 4 core architecture brings one more rather significant change – for the first time, AVX-512 instructions with 512-bit vectors are supported in AMD processors. Their eventual contribution will be discussed in a separate test, which will be separated from the set of standard measurements. However, it is already worth noting that the implementation uses 256-bit units, which Zen 3 already had, and the 512-bit vector is processed on two passes. According to AMD, AVX-512 computed with 256-bit units has one advantage – there will be no underclocking of the cores when these instructions are computed, which has plagued Intel’s implementation (Rocket Lake). In addition to AVX-512, Zen 4 is the first AMD processor to support VNNI instructions.

There are more of those things that premiere with Ryzen 7000 processors. One of them is AMD’s new AM5 platform, which uses a motherboard contact plate socket (LGA 1718). The pins on AMD processors end with Zen 4. With these processors and motherboards, DDR5 memory support (officially DDR5-5200, unofficially more) is coming to the AMD platform at the same time, DDR4 is not supported. AMD processors do not have (like Intel, for example) a dual memory controller that would also support the older standard (DDR4). Ryzen 7000s only support DDR5 memory.

Also new is PCI Express 5.0 support. The Ryzen 7000 provides this for the graphics card (PCI Express 5.0 ×16) and SSD – the processors theoretically have a pair of PCIe 5.0 ×16 interfaces to directly connect the NVMe SSD to the processor, but both do not have to be brought out to slots on the motherboard. 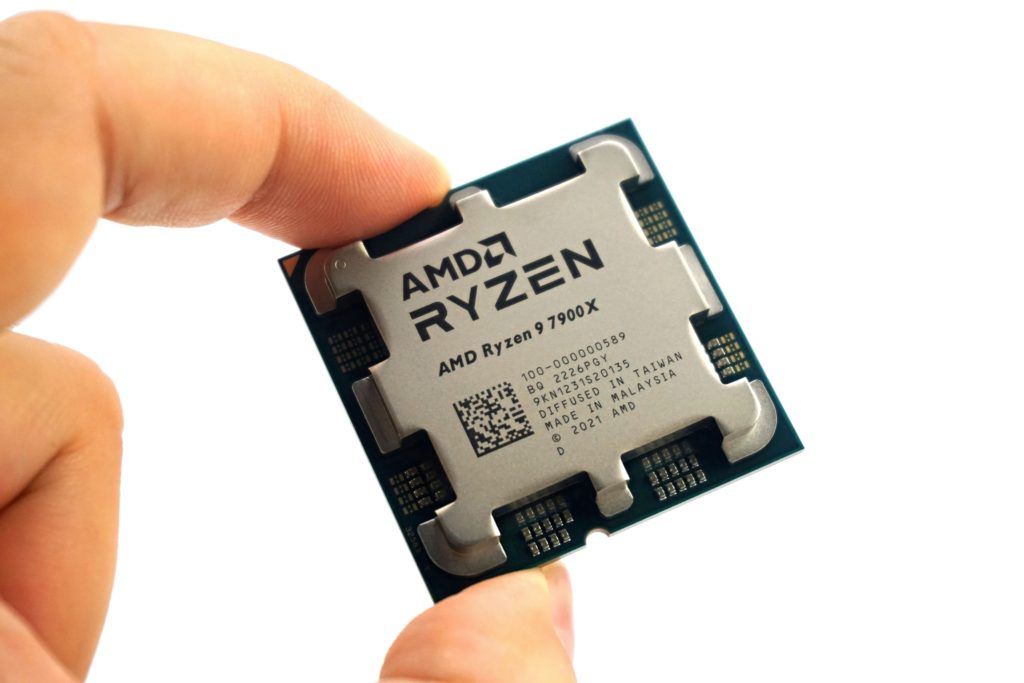 The presence of an integrated graphics core can also be considered a rather significant change compared to previous generations. AMD’s more powerful processors for the AM4 socket did not have iGPUs (and it only concerned APUs), but the Ryzen 7000 “Raphael” now have a small GPU integrated in the I/O chiplet with two CUs (128 shaders) of the RNDA 2 architecture. The gaming performance of this graphics isn’t whopping, but it will allow you to hook up a monitor and function without a graphics card similar to Intel processors. With this, AMD finally erases one of the competition’s advantages.

All the parameters of the Ryzen 9 (7900X), measurements of which occupy the following chapters of the article, are available in the table below. It compares with the Intel Core i9-12900K, which is closest in price to AMD’s 12-core (and 24-thread) processor.