This time, it wasn’t as long a wait as for the Ryzen 5 5600. On the contrary, the Ryzen 5 7600 came out very shortly after the faster model with the “X” in the name. AMD apparently hurried with this lower-power model also because of dissatisfied reactions that 7600X criticize the worse cooling. With the significantly more efficient R5 7600, the situation with silicon is brighter. Plus it’s cheaper and doesn’t lose all that much in performance.

AMD’s Ryzen 5 7600 came just under three months after the R5 7600X. Compared to the last generation (Vermeer), this is a big contrast. During those days, it already seemed at times that the successor to the hugely popular Ryzen 5 3600 – the R5 5600 – wasn’t even coming after all. It finally came out at the end of the AM4 platform lifecycle, almost a year and a half after the Ryzen 5 5600X with a weaker price/performance ratio.

Now, AMD’s release schedule for individual processor models is closer to Ryzen 3000 (Matisse), with all models coming out in close succession. In addition to the Ryzen 5 7600, the Ryzen 7 7700 and Ryzen 9 7900 models are also bound for a January date. All share a TDP of 65 W and PPT of 88 W, which marks a significantly lower power limit compared to the X models. The lower power draw and along with it lower temperature are probably what “forced” AMD to hurry up a bit with these processors. You know, temperatures of 95 °C with a powerful cooler are viewed with skepticism by many, even though they don’t degrade performance and AMD claims they’re fine for these processors. The temperatures of the latest Ryzen 7000 models (R5 7600, R7 7700 and R9 7900) are naturally significantly lower due to the PPT limit of 88W, especially in the Ryzen 7 and Ryzen 9 class. 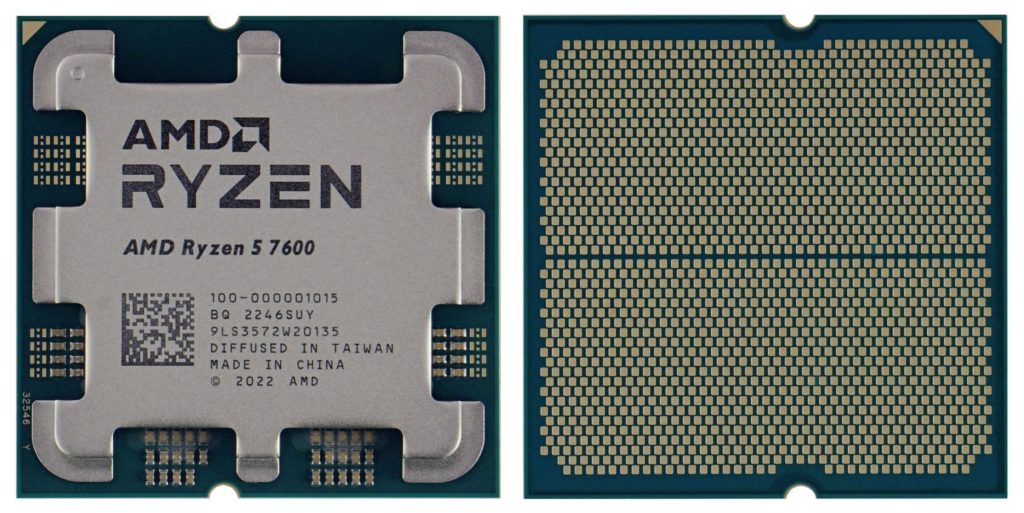 The tested Ryzen 5 7600, like the Ryzen 5 7600X, has six Zen 4 cores (with SMT support) that are all implemented in a single chipset. The difference is in the clock speeds achieved. The base clock speed is 900 MHz lower, but that doesn’t mean that the R5 7600 will be that much slower in practice.

Even at around 65 W, operating clock speeds are significantly higher, up to around 5 GHz in games. Sure, even at that, the R5 7600 is some 450 MHz slower compared to the R 7600X, which naturally comes with lower gaming performance. In terms of computing power and “hard” multithreaded workloads that squeeze the most out of the processor, clock speeds can also stick to 5 GHz as long as you don’t restrict the processor with a power limit. At that point, the R5 7600 is only 250 MHz behind the R5 7600X, but hand-in-hand with that, the difference in power draw shrinks. 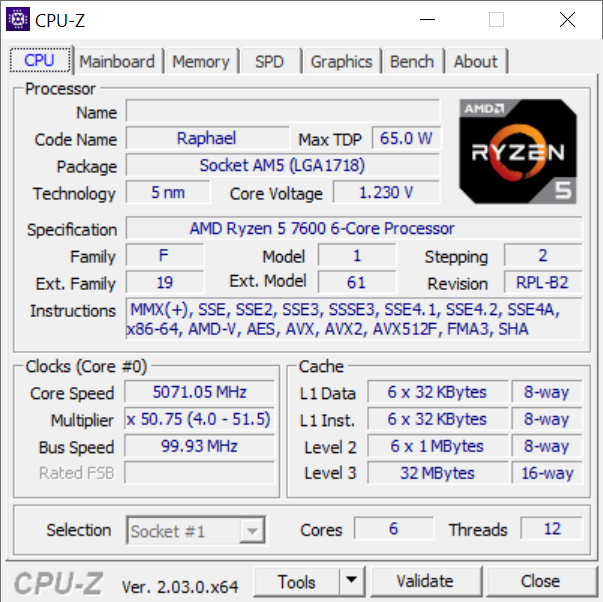 However, Ryzen 5 7600 always achieves a better price/performance ratio as it is 20–25 % cheaper. But that’s the case with Intel’s Core i5-13400F as well, against which the R5 7600 has an iGPU to boot, but that won’t be of interest to most users who have their own graphics card. Anyway, you’ll have to wait a while for a comparison with the Ci5-13400F, for now we have measured only the older Alder Lake (Ci5-12400) without the E cores which Raptor Lake has to spare and makes AMD processors worry about them again.