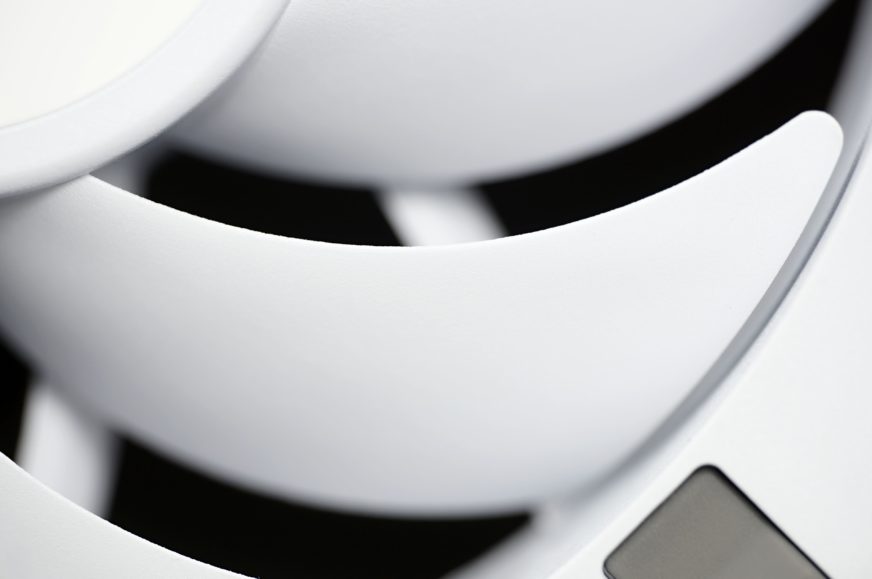 It’s not a joke. It may sound silly, but know that we are not presenting you with anti-physics. On the contrary, the foundation in physics here is very good. Different colors of materials, as long as they are not just a surface finish but a homogeneous mass, can (and often do) affect their strength. Our sensitive measurements reveal well the differences that exist between the white and black variants.

In our tests of the Corsair AF120 Elite fan, we had its black variant (CO-9050140-WW). However, there is also a white version (CO-9050142-WW) with which the results of the black fan do not scale. This is because of its lower rigidity. Although the shape of the rotor does not differ in any way, the injection mold is the same, but the white material does not have the same chemical elements.

The white material, in short, is composed of different elements than the black one, and the mechanical properties are somewhat different. Even Noctua, when launching the NF-A12x25 chromax.black fans, disclosed that the long wait for the black fans was due to the fact that it was not exactly easy to change the color (from the original brown) in a way that preserved the original specifications. In Corsair, they didn’t worry about it so much, but we did wonder about this issue and measured the difference. It’s nothing dramatic, but it’s good to know that the white fan is pulling the short end of the stick compared to the black one. 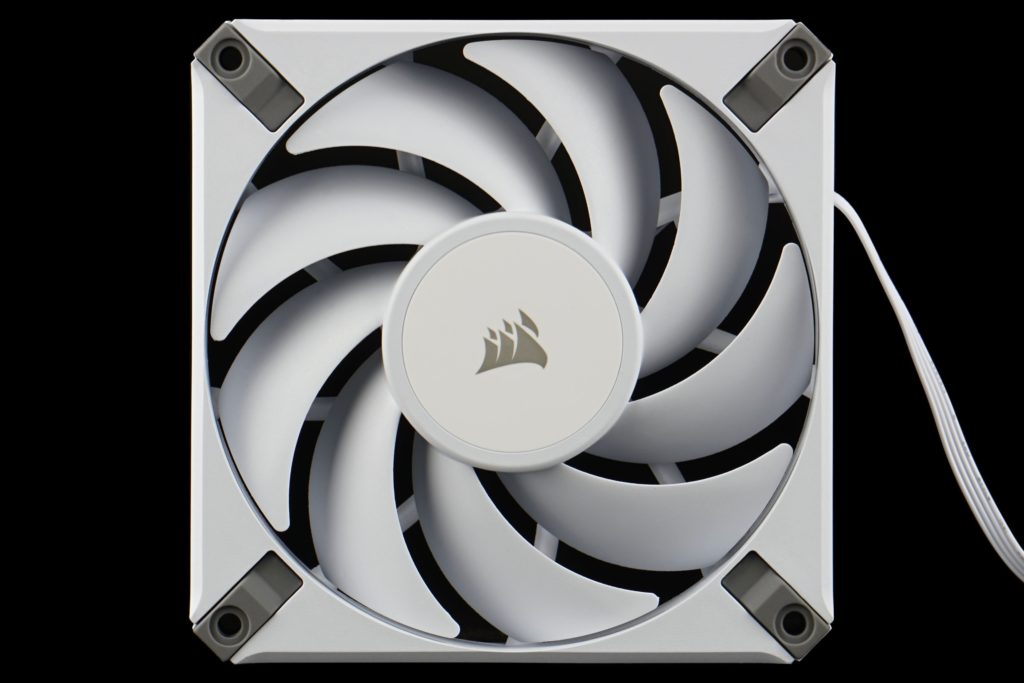 However, the stated parameters of maximum airflow and static pressure are the same and correspond to what is claimed by the manufacturer. The difference is in the maximum noise level, which Corsair shouldn’t list the same anymore – the white AF120 Elite fan is noisier. When aligned by fixed noise levels, it then comes out worse in terms of performance as well. The static pressure is clearly lower and then the airflow as well. In a no-obstacle environment, a 0-5% peak. The biggest differences are at very low speeds around 600 rpm and then from 1300 rpm upwards.

At higher speeds, compared to the black fan, we have already measured some vibrations – in both the Y and the Z exis (for the black one, there are only symbolic vibrations in the X axis). These are still very low vibrations, but finding them nicely shows that the white fan blades are undulating more. And that is why the differences in noise are achieved. With the hexagonal grille, where the fan is fighting the higher resistance of the environment and the sound of microturbulence enters into it as well, the difference is already noticeable at the same speed. Therefore, when aligned to the same noise level, the difference in airflow is up to 10 % against the white fan in the worst case. That’s at higher speeds, around 1200 rpm. At low speeds, below 600, the white fan has a rare advantage, probably due to the creation of fewer microturbulences on sharp edges, where less stability in blade shape can have a paradoxically beneficial effect. At very low speeds, even resonant frequencies do not enter the sound as strongly.

In the 33 dBA mode already, (i.e. the second quietest mode, where the white fan is still a hair weaker in terms of performance) there are small peaks in the sound in the most intense 300–400 Hz aerodynamic band. These only start to appear with the white fan at higher speeds, along with measurable vibrations. However, amplified are usually the lower, rumbling frequencies between 100–200 Hz. So the white fan can and will be more rumbly at higher speeds compared to the black fan. And it’s also worth noting that all of these findings of ours are based on measurements on two fan samples. Two of both white and black. The black and white results match perfectly. So it is by no means a question of the pieces being different as such, regardless of colour. The influence of the rigidity of the material on the properties is unambiguous. With the AF120 Elite fans, however, Corsair has still managed everything very well. We will definitely be covering this topic and see how other manufacturers will have handled recolouring. 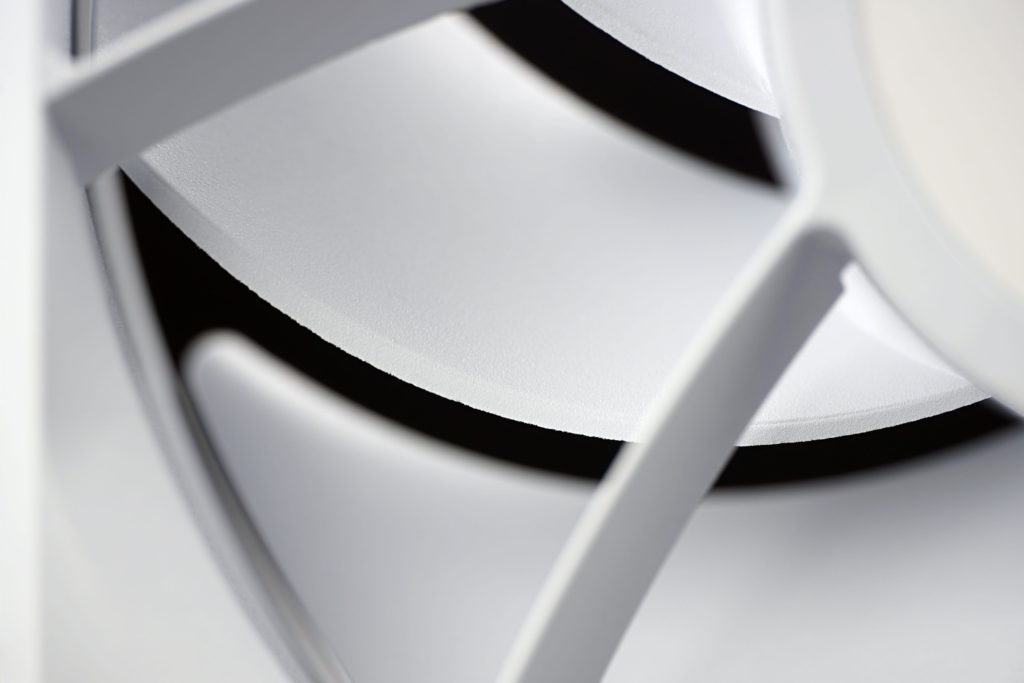 Finally, we will come to the word “rigidity”. This is a term we often use with fans and, unless we’re overstating it, it always means compressive strength. The Corsair AF120 Elite has a high compressive strength (although it’s a bit lower on the white one), but then there’s also the tensile strength. And that’s another property that expresses how much tension the material can withstand when bent before it starts to crack. The tensile strength of the AF120 Elite, on the other hand, is quite low. An example of a material that has a very high compressive strength and at the same time a very low tensile strength is also glass. You can break this fan in a similar way as you can see in the pictures below. One of the samples has already come to us in multiple pieces (or small pieces), which is also a bad calling card for the poor protection of the insufficient packaging, which does not absorb enough shock during transport. 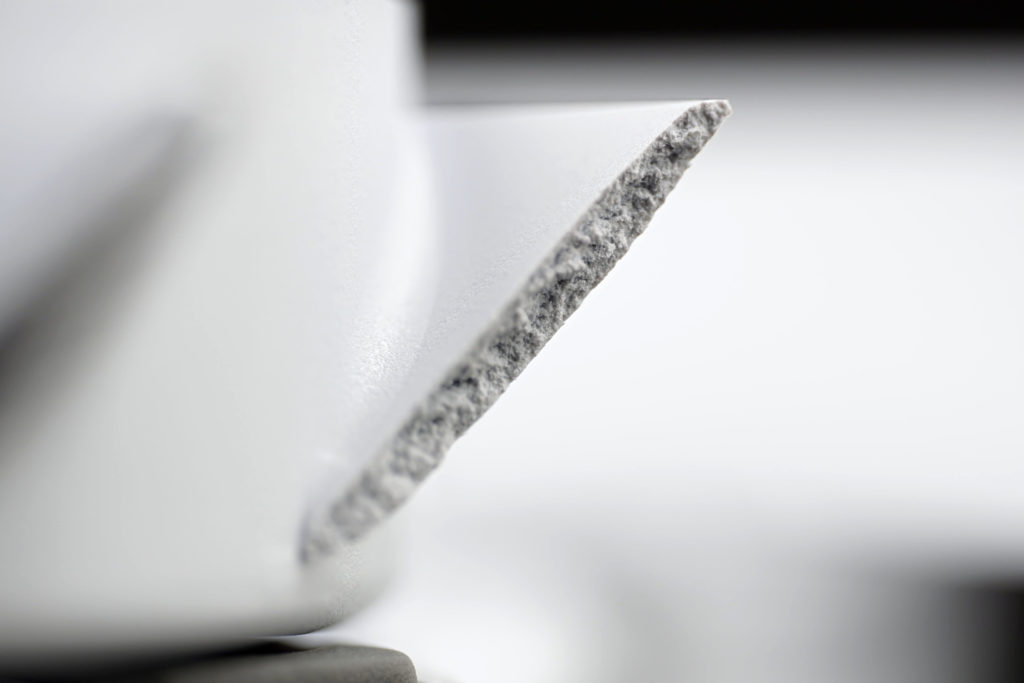 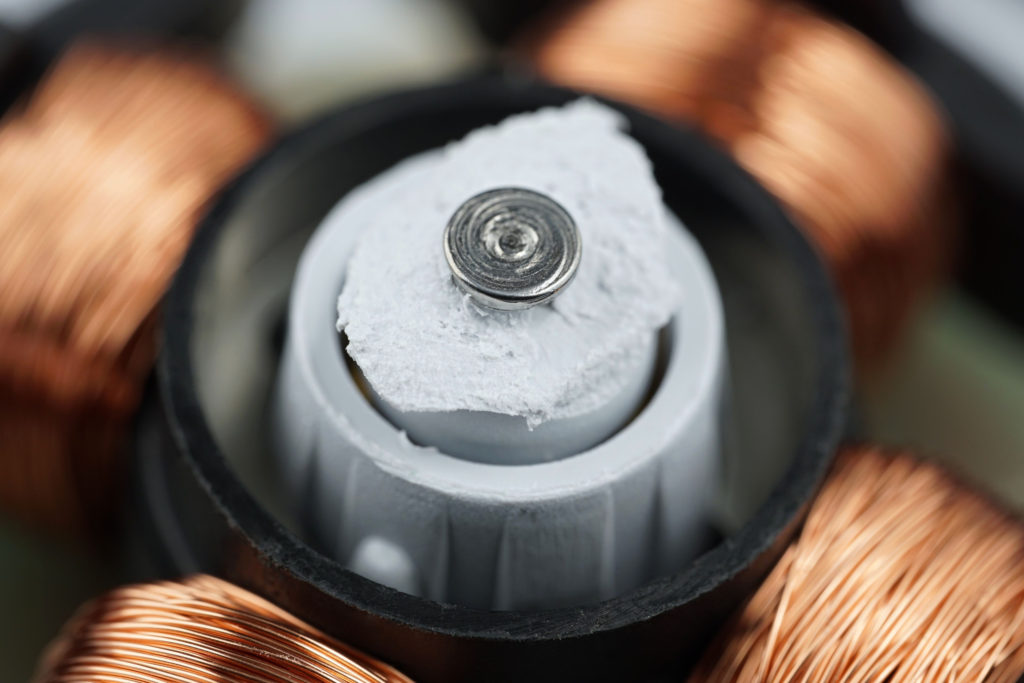