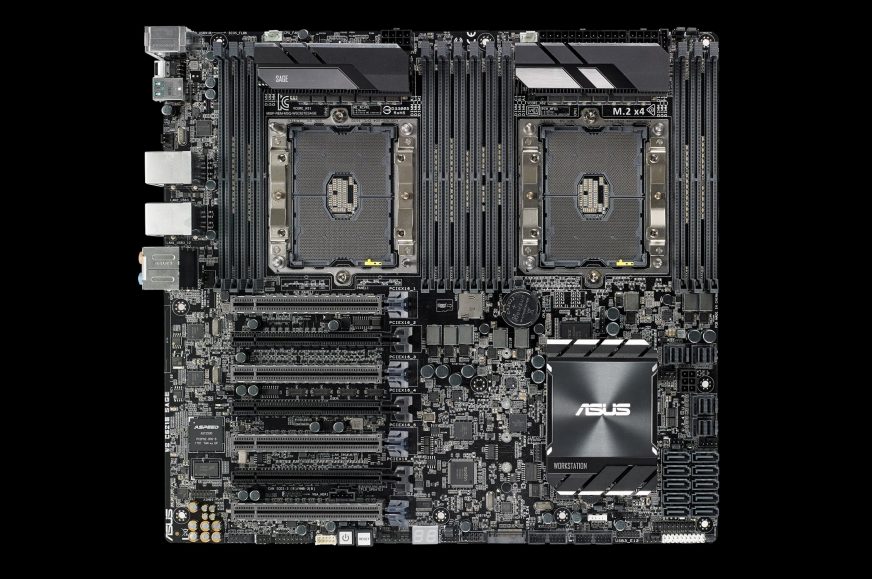 We need coolers for a new socket

This summer, Intel and AMD introduced processors with significantly higher power consumption and heat output: Threadripper with 180W TDP and Skylake-X that does not fall behind. After OC, both can consume over 300W (and Core i9-7980XE even more). These are new challenges for cooling, but maybe they are not the final “boss”. It looks like OC possibilities will now open for the latest generation of Xeon servers with 28 cores.

How exactly Asus managed to make OC possible here has not been revealed yet. Web mentions only that OC of Xeon will be available. The most likely thing is that it works via a turbo, that is, the CPU can be forced to use all the cores constantly at the maximum boost, normally allowed only when a small number of cores is working. Or maybe it will be done by increasing BCLK.

The potential performance of your computer could be really high. But it will be also interesting in terms of consumption and cooling. The chips that Intel puts to Xeons should have better energy efficiency. It is assumed that these are less heating pieces with lower leakage, while the worse go to Core i9. But after overclocking, a big increase in consumption can be expected anyway. Cooling Xeons with the highest number of cores will be probably quite challenging, plus you will have to take care of two pieces side by side. And also two power supply circuits – 7+1 phases under the heatsink that is not so big. Perhaps they will have to be cooled actively after OC. It will all depend on motherboard limits.

There is another complication: Intel uses a different socket for these CPU than LGA 2066 for desktops. LGA 3647 is much larger and has a completely different cooler mounting. You cannot use any existing cooler with Xeon Gold/Platinum processors which have an IHS that is considerably bigger. For playing with this expensive platform, it will be necessary to acquire a cooler used in servers, improvise some custom mounting, or wait for something from cooler manufacturers.

The situation is quite similar to the one with the Threadripper. There were some special coolers for it. A relatively easy but not optimal solution is to use a simple clamp for extended Asetek liquid coolers with closed circuit – maybe even Asus will add some to their board. Perhaps the best solution here is a water monoblock that would be shaped exactly for this board and socket. It should have one critical advantage – the ability to effectively cool the power supply circuit. Perhaps there is someone who can make it.

We do not know yet when the board will be available on the market. Asus has not announced a price, but it will be surely high. After all, it is meant for customers who have several thousand dollars/euros for two Xeons Gold or Platinum.

Back to: We need coolers for a new socket
Flattr this!
LGA 3647 motherboards overclocking Xeon