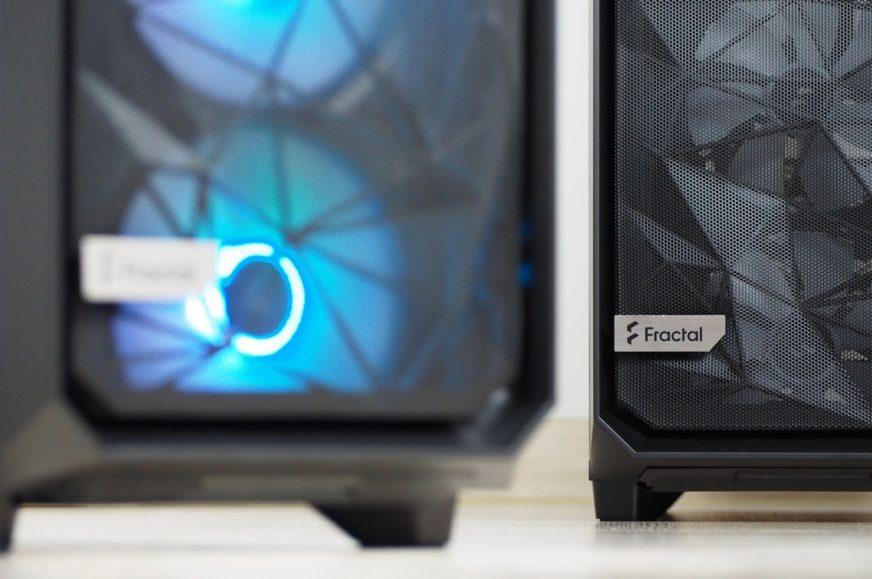 Recently, Fractal Design has been introducing cases like clockwork. Today, a model from the well-established Meshify 2 series has come out. The new product is with the RGB attribute, but also noteworthy is a cut-down version with the Meshify 2 Lite (RGB) designation with a cheaper price. What the original version had to give up to create the Lite version, we’ll show you in a comparison of the two cases.

Anyone who thought they were going to skimp on the supplied accessories was right. The Lite version only got two (instead of six) hybrid 2.5″ and 3.5″ internal storage bays. This is because the modularity differs for the two versions. Related to this are the quantities of screws and anti-vibration pads supplied for the drives. 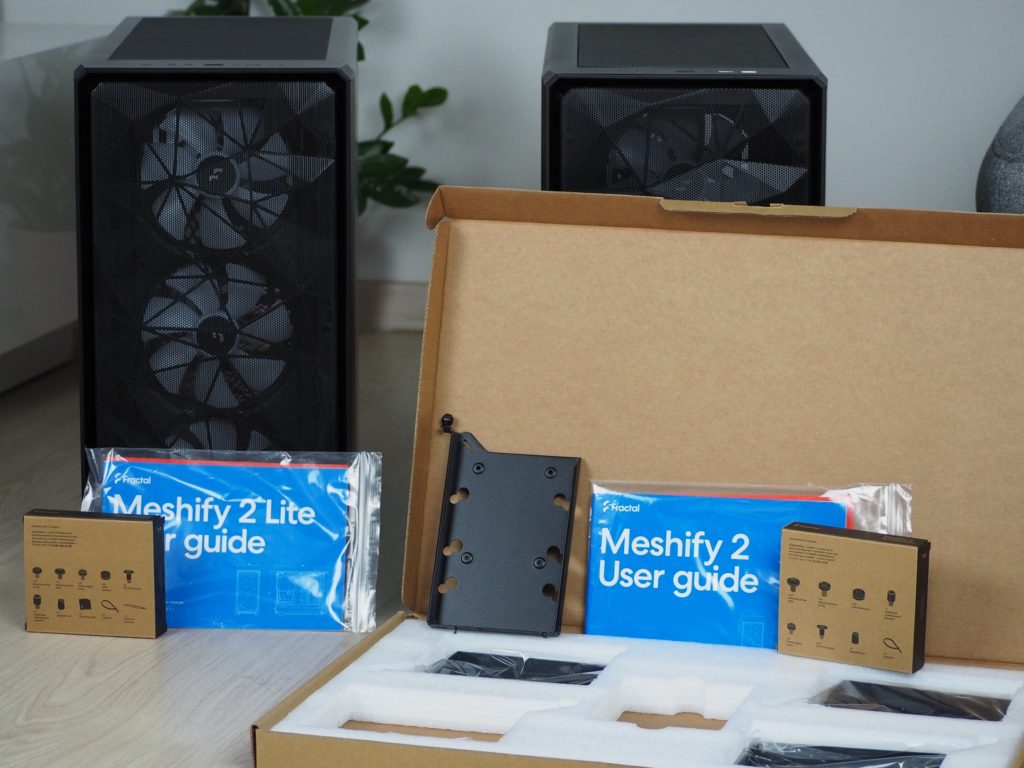 The accessory contents aren’t the only thing the Lite version is stripped of. The 1.3 kg weight difference between the cases has to show up somewhere, even if the exterior is almost identical.

Whether the Lite or the full-size version, both have a 2,85 mm thick tempered glass side panel. For both, there is also a choice of a metal left side panel. Fortunately, the Lite version of the Meshify 2 case also retains the tool-less latching system for removing the side panels. You can quickly and easily make various adjustments in the “guts” of your computer without fussing with screws. Personally, I’ve been actively using this mechanism for over a year now and have yet to experience a side panel jamming or becoming unremovable. Once you get used to it, seeing screws in a case is a bit of a pain. 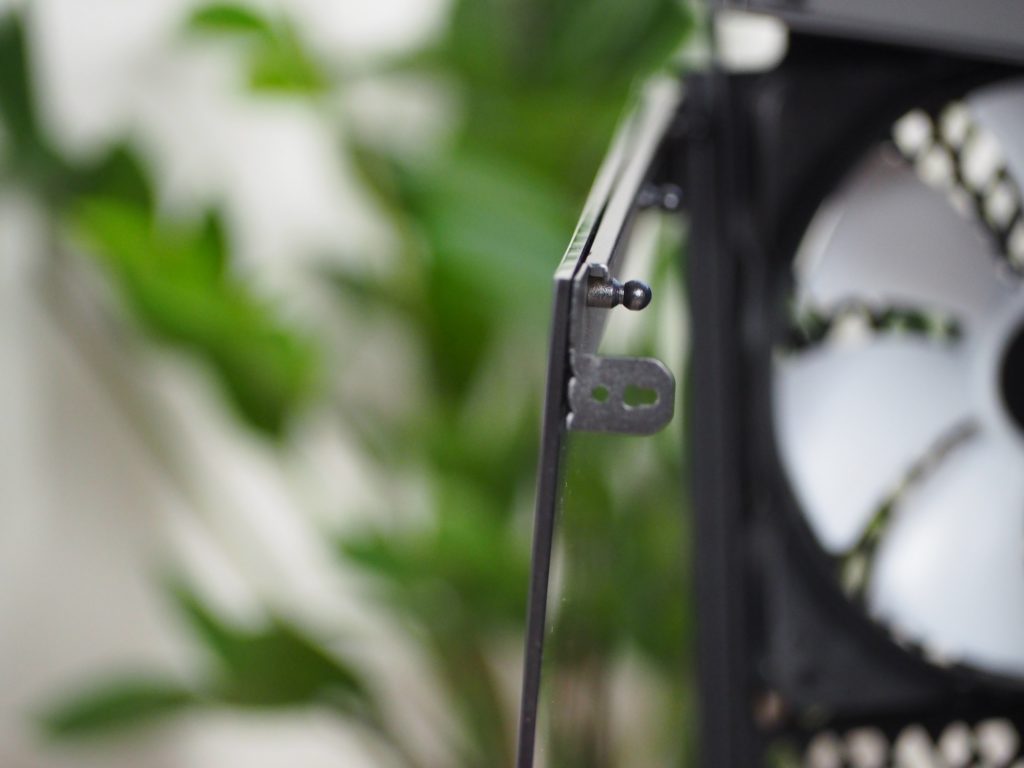 Attractive angles, company logo and access to the dust filter from the bottom. That’s a quick description of the front panel. The protruding logo also serves as a handle for opening the front, which is held in place by snap-on hinges. A keen eye will not miss the fact that one out of the pair has a more transparent panel than the other. 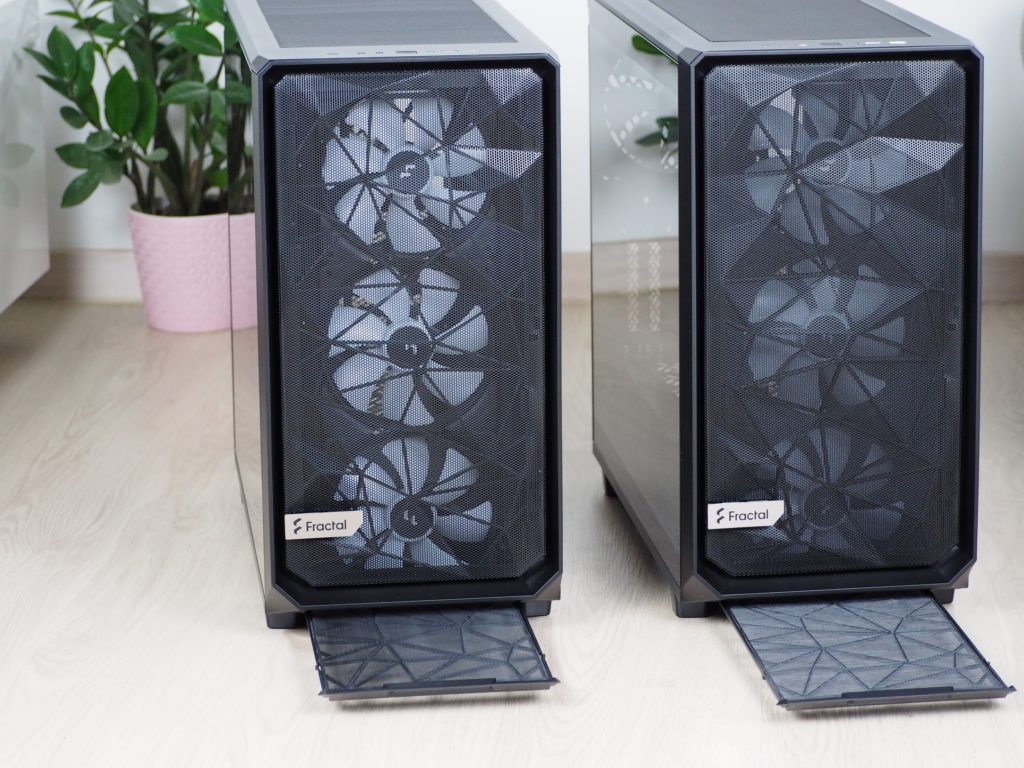 The Lite is missing a fine dust filter, which could be inserted from the back of the front panel. So the only dust protection is the front panel itself, with holes as large as 1.5 millimeters. The effectiveness against dust is thus weaker. 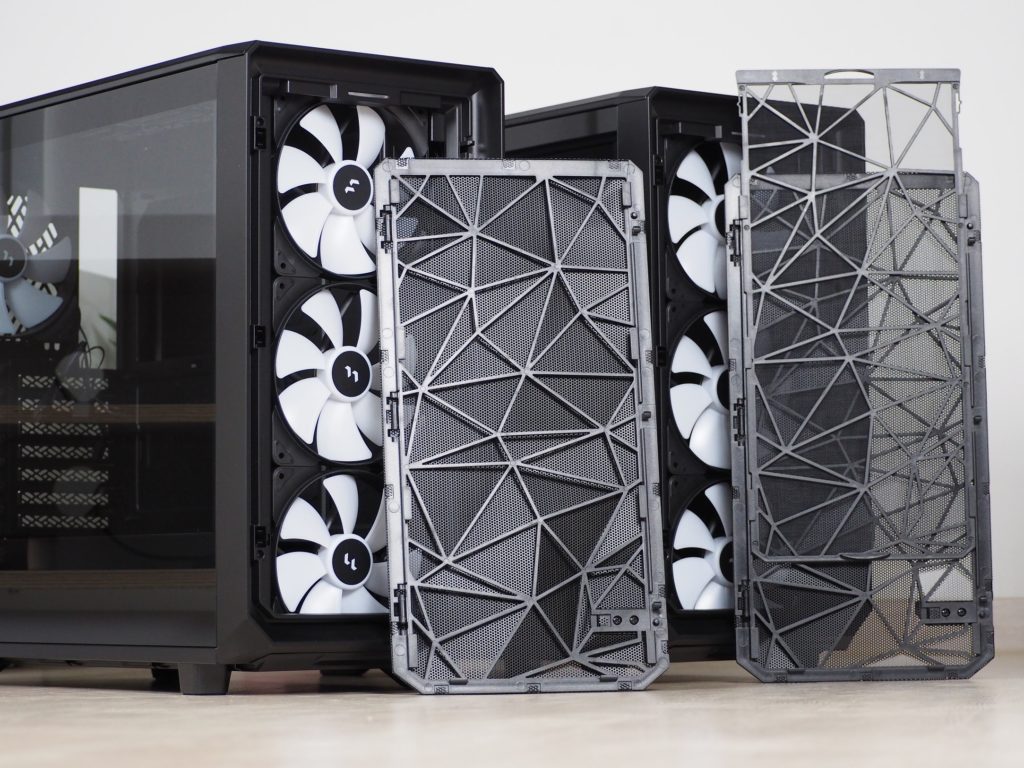 The front panel is attached to the case by a plastic frame. This takes you to the bare case structure, where the glass side panel can be secured with a screw. This can also be used to make other modifications to the case for the Meshify 2 version, which we’ll get to later. 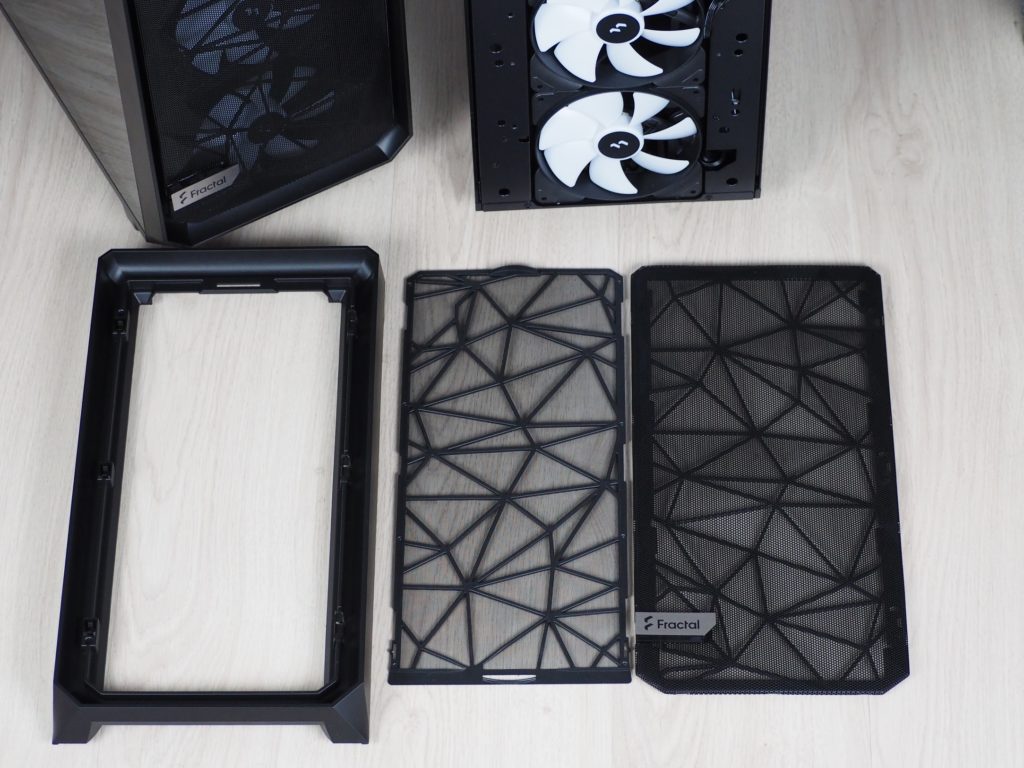 The top parts of the cases are functionally different. While the Lite offers a standard grille with perforations as is customary on the top of mid-end cases, the full version has a removable top with perforations. You may also notice a 25.4 mm hole on its top, which allows you easier access to fill the water cooling expansion tank. Underneath it is another fine dust filter, but the Lite version can’t grip it in any way like it could in the front. It is possible to mount 3×120 or 140 mm fans or a radiator up to 360 mm directly on the ceiling of both cases. The Lite is not only short on dust filters, but also on the available width of radiators that the top can accommodate. The maximum is 121 mm, while the full-size Meshify 2 can fit a radiator up to 143 mm wide. You won’t install a 420 mm radiator in the new Meshify 2 RGB either. Only the versions of the case without RGB LEDs allow this. 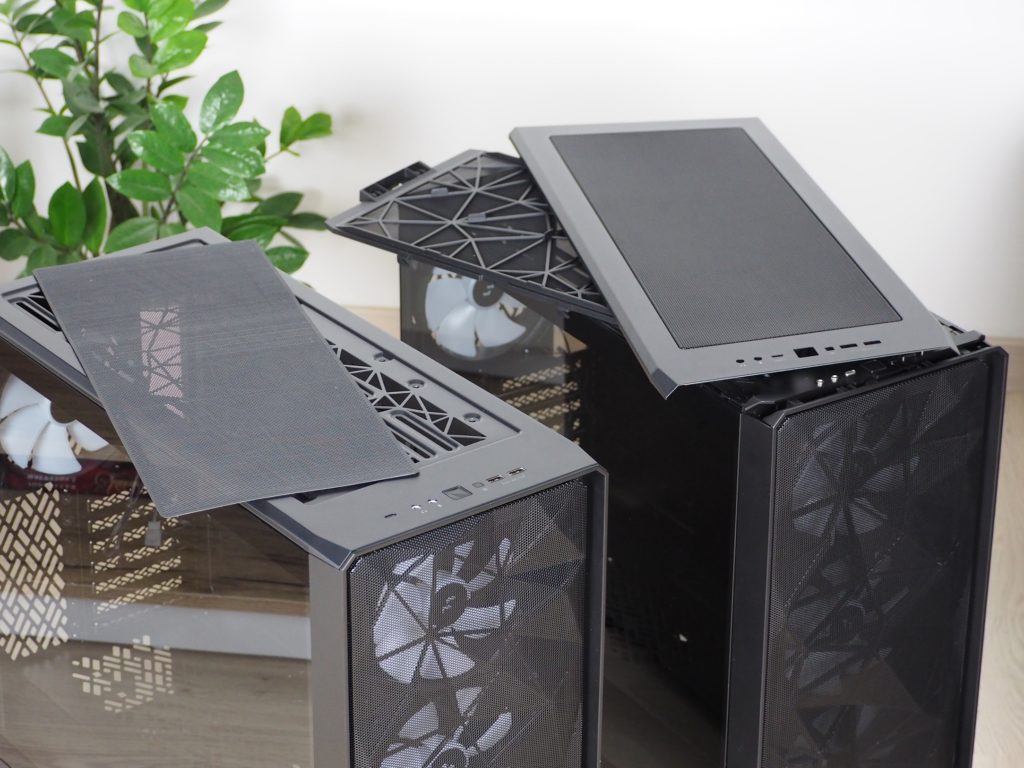 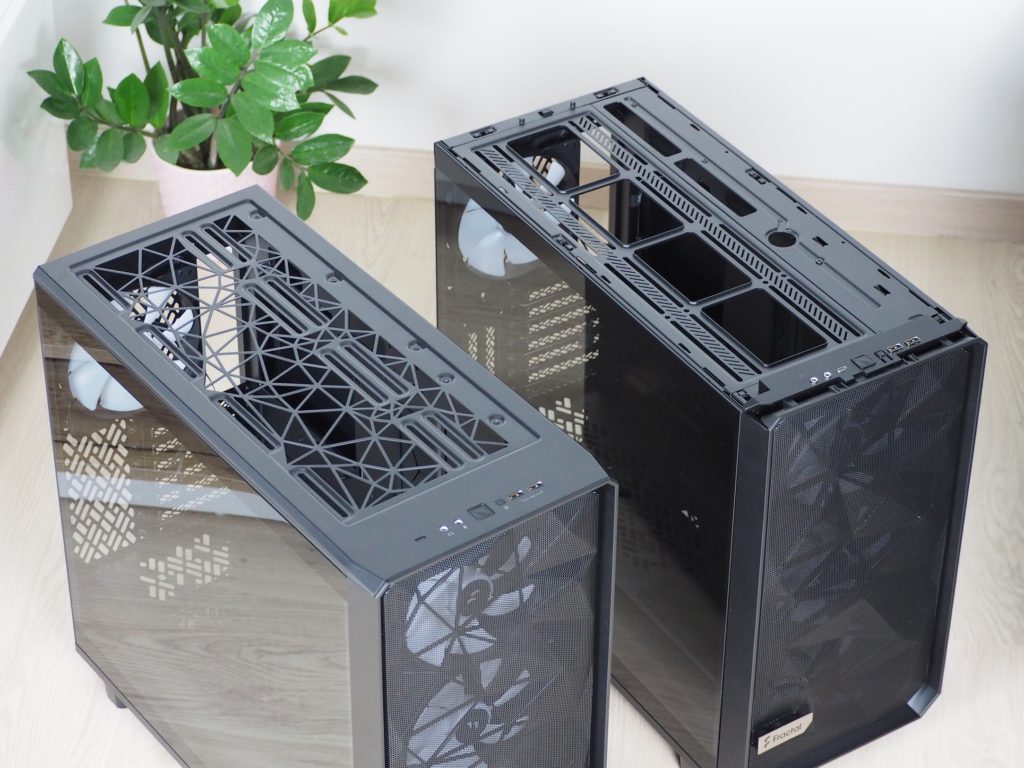 Removing the top part of the case and having barrier-free access when installing hardware is the dominant feature of full-size Meshify 2 cases and smaller versions like the Compact. Unfortunately, the Lite version has lost this advantage, so you have to take into account that the case ceiling may be slightly in the way when you’re installing hardware. There is plenty of room for handling anyway, from the motherboard to the ceiling it’s 44 millimeters. 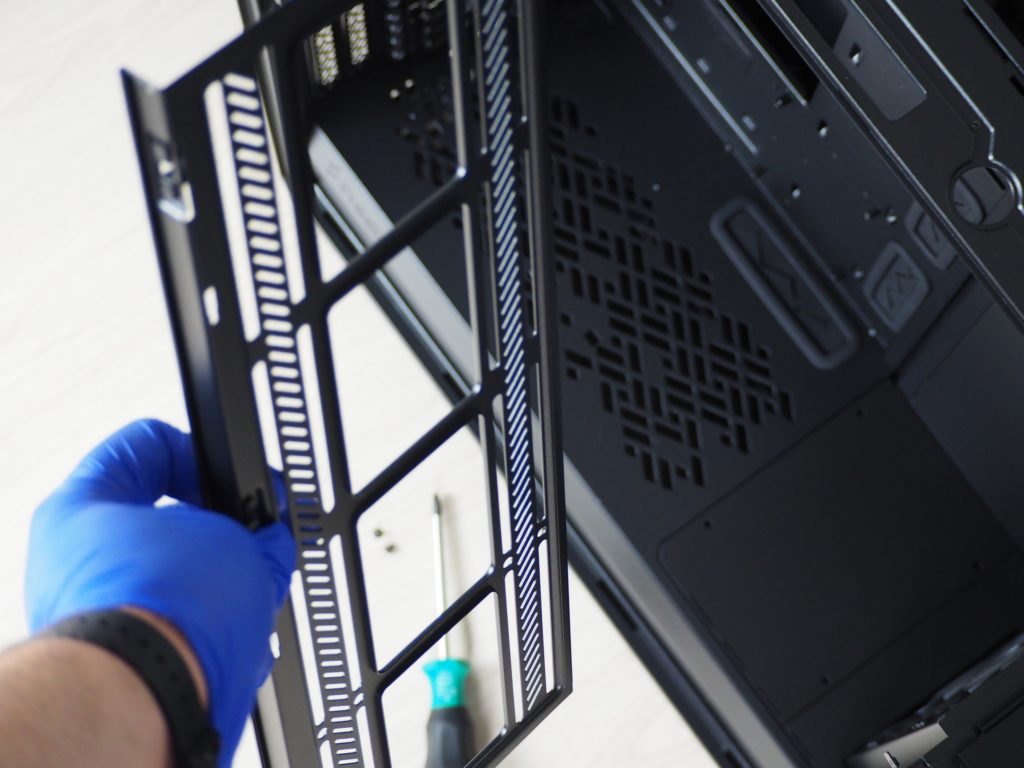 There is only one difference between the cases on the top I/O panel, and that is the absence of a USB Type-C connector in the case of the Lite. However, there is a pre-fitted slot, so it can be purchased additionally if necessary. The designation of the connector is “Model E” and the recommended price is 10,99 EUR. The other functional parts are identical for both. Two 3.5 mm jacks for headphones and microphone connection, power button. Instead of a restart button, there is a button to change the lighting and two USB type A connectors.

On the back, both new cases retain the frame for mounting the power supply. While I’m not a fan of it, fitting the power supply through the hole in the back is quite handy. In the center are removable PCI Express card expansion covers, where the Lite is stripped of the ability to mount a card in a vertical position. Above it all is the I/O hole for the motherboard and next to that a perforation for the exhaust. Most manufacturers use a beehive shape for the rear perforations, the Meshify series of cases instead have a structure that alternates squares and rectangles. But there are sharp edges here too, and the open area is around 50 %. 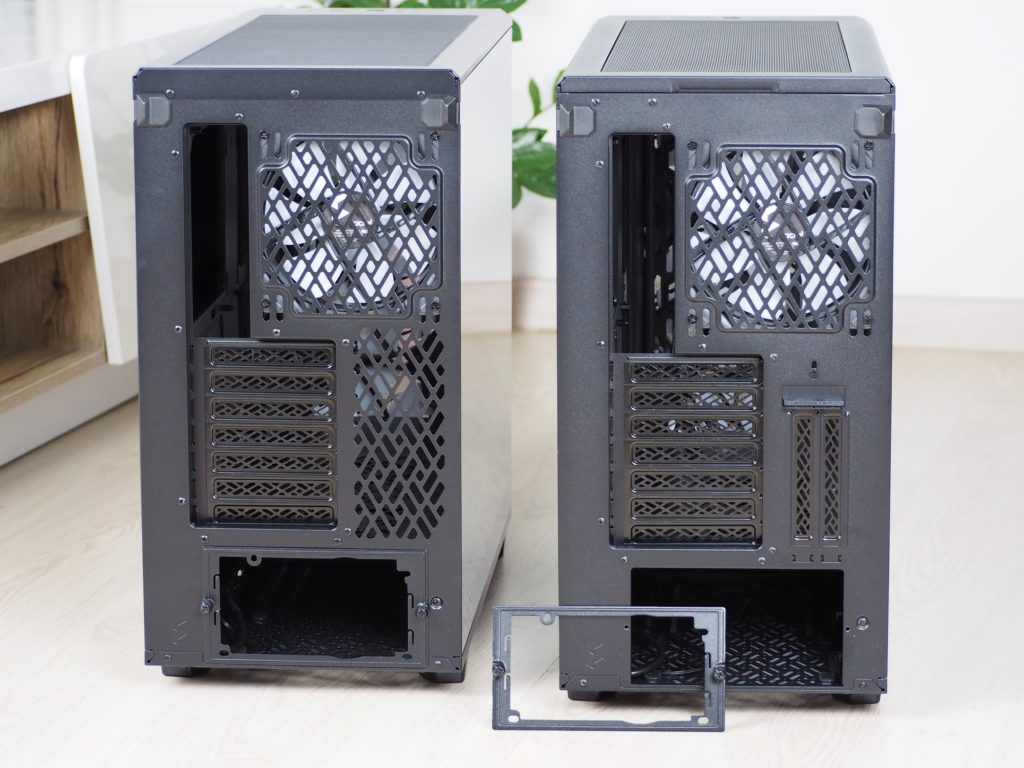 The bottom section offers a huge dust filter over the entire surface for both versions of the cases. Once removed, you can access the four SSD/HDD position screws. You can move these within the hole range to a large extent. But if you don’t need these positions, you have the option to use this space for two 120 or 140 mm fans or a water cooling radiator with a maximum size of 280 mm. For the non-RGB versions of the cases, there is the option to place a radiator up to 280 mm. 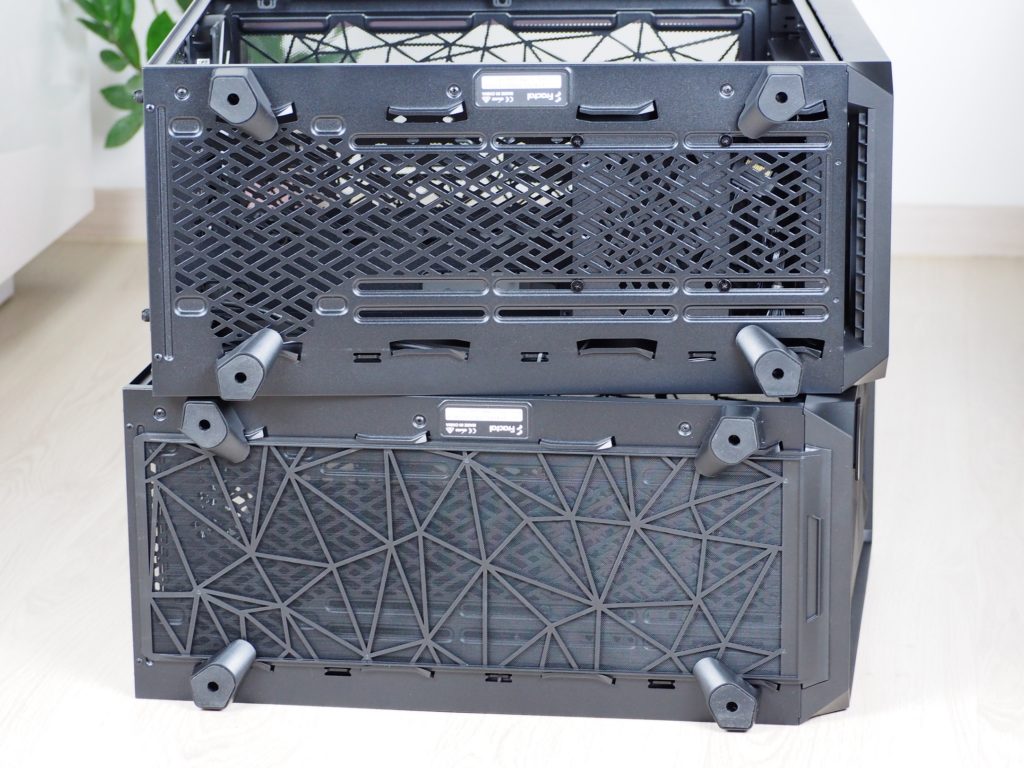 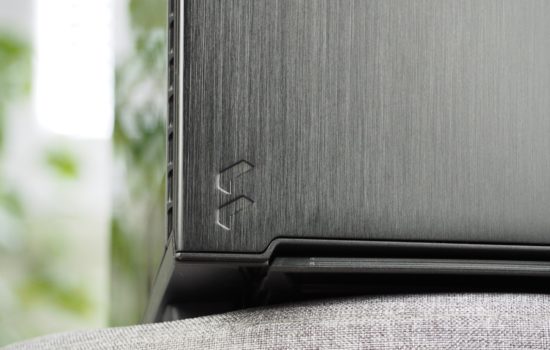 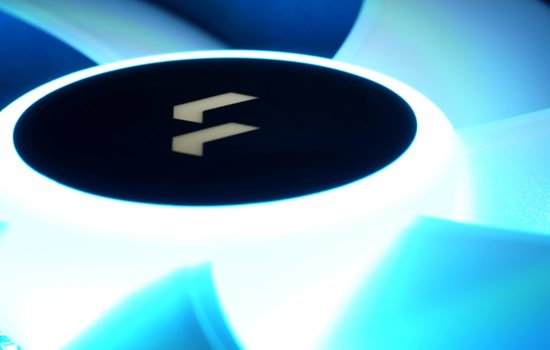 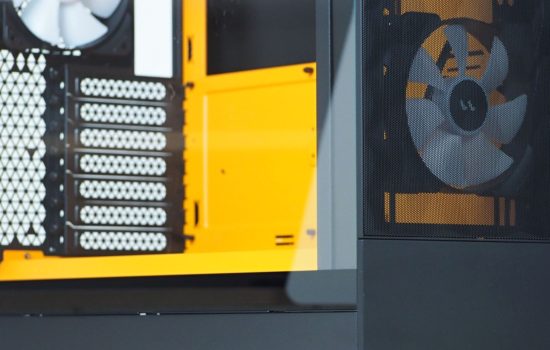