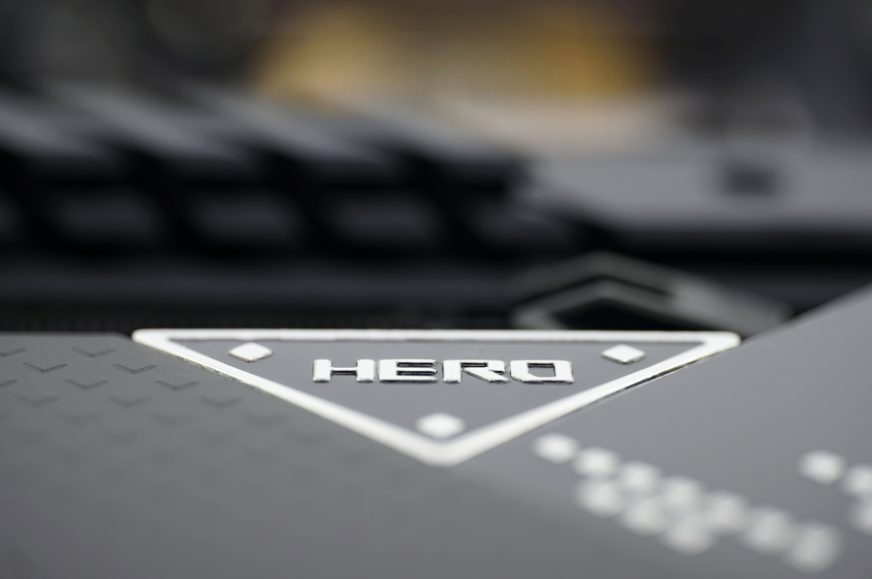 An expensive but a very effective motherboard. Thus, the high purchase price of the Maximus Z690 Hero can be gradually returned in lower operating costs after fine-tuning. First and foremost, however, it is a proper support for the most powerful processors, which can be safely overclocked well beyond the capabilities of the most powerful coolers. The board also comes with an SSD expansion card, unusually.

The Z690 Hero motherboard can be considered a sort of “starter” model of the ROG Maximus series. From an overall perspective, the price of around 685 EUR is very high, but Asus has bigger extremes, literally – three times more expensive the ROG Maximus Z690 Extreme.

The Z690 Hero, unlike the similarly priced (though still slightly more expensive…) Z690 Apex, is designed for the casual user who still has high demands, but doesn’t appreciate features such as liquid nitrogen (LN2) CPU overclocking support and the like.

In its essence, the Z690 Hero is very similar to the Z690 Formula board, except there is no liquid cooling of the VRM (the Formula is ready for it) and no 10-gigabit ethernet (Hero traditionally has “only” a 2.5 Gb network). So much for the basic orientation among ROG Maximus boards for both Intel Alder Lake processors and the upcoming Raptor Lake generation. 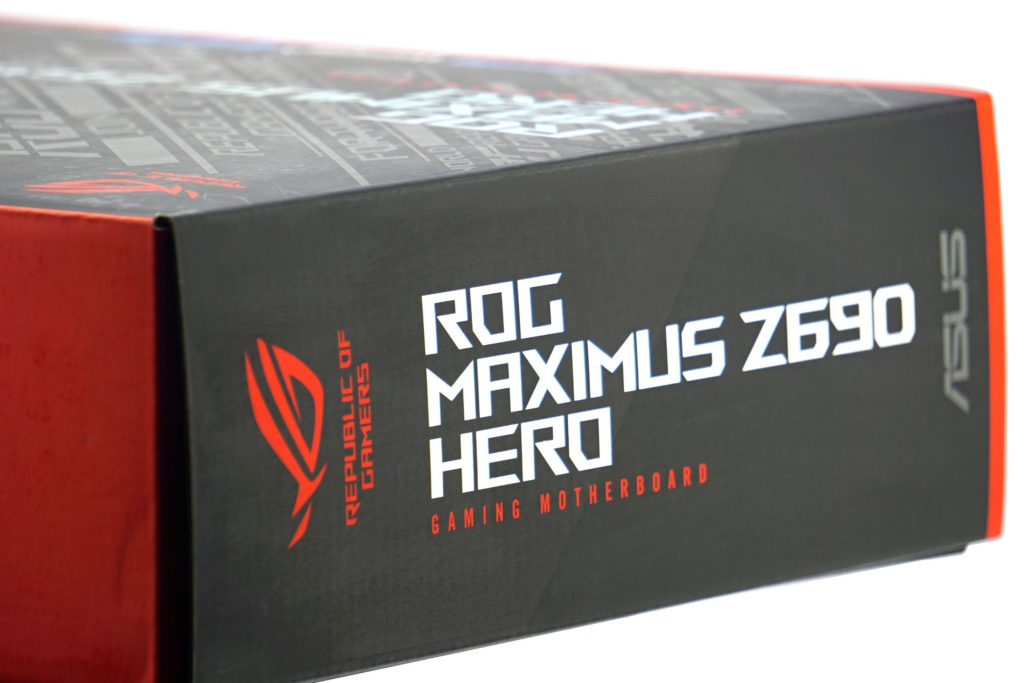 Although we are in a higher class where wider E-ATX formats start to appear, the Z690 Hero still retains the ATX dimensions (305 × 244 mm) and thus compatibility with relatively smaller computer cases. The front side in particular is distinguished from other boards by the Polymo display. The latter is between the external I/O panel and the VRM heatsink. It doesn’t have as great a resolution as OLED displays, but it’s a cheaper to manufacture and hopefully more reliable option in terms of time.

What the board lacks a bit in this price class is definitely the backplate, which both protects the PCB during installation (into the case, but also for example when mounting a CPU cooler) and strengthens it. When using heavier coolers (which is also the case with the Z690 Hero), for which higher pressure is also suitable, the substrate should not be deformed. Sure, it’s a cosmetic thing that gets lost during assembly, but still… 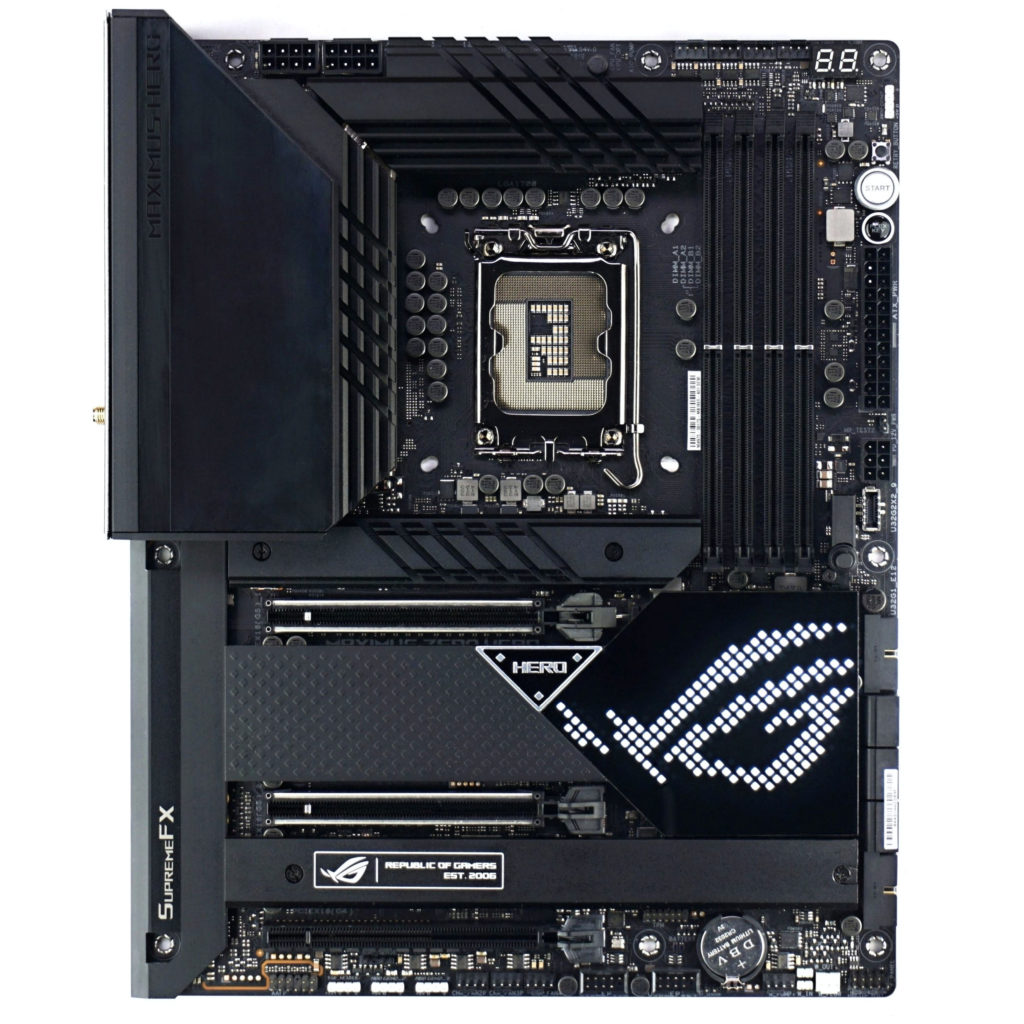 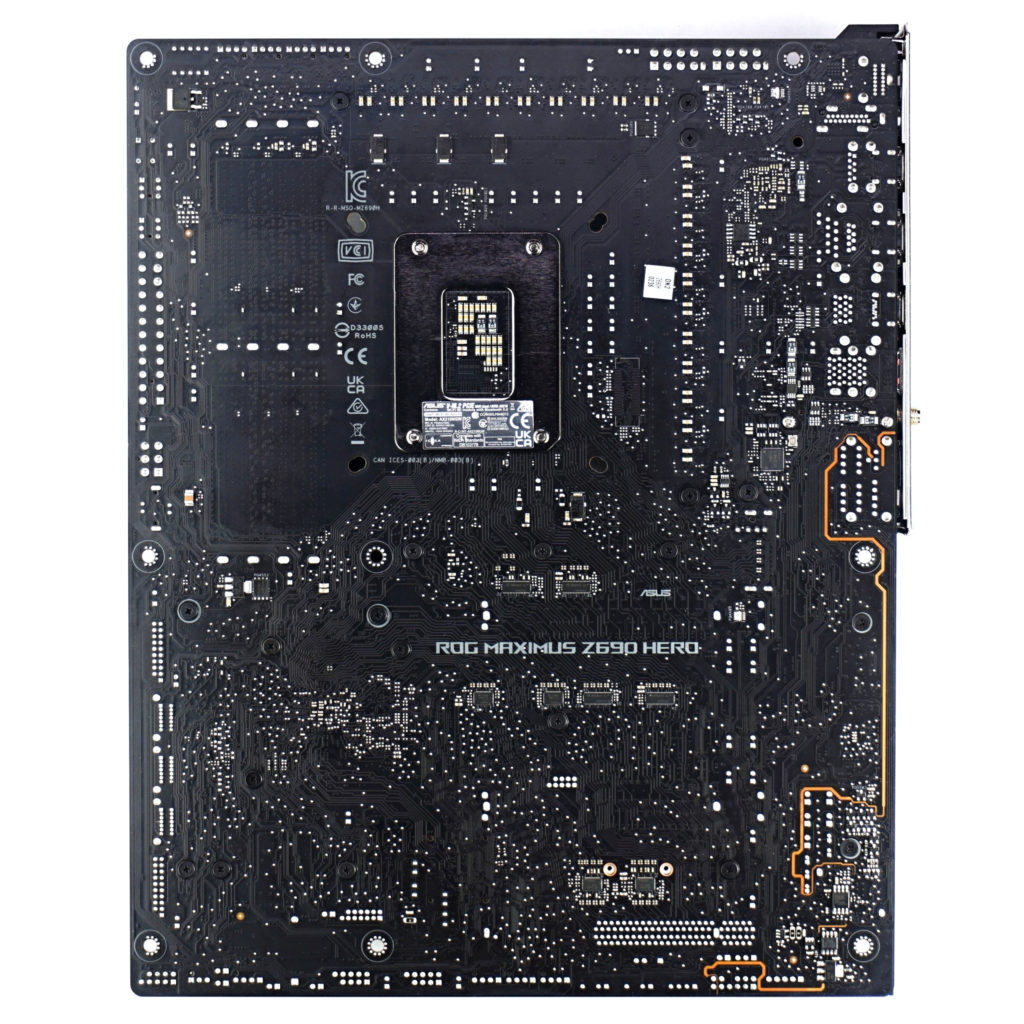 Asus invested the savings in an ROG Hyper expansion card to expand the total number of PCI Express 4.0-enabled M.2 SSD slots. This adds two more (on the expansion card) to the two built-in ones on the motherboard and when you factor in the slowest M.2 slot (with PCIe 3.0 support, but still a four-lane one), there are up to five slots available for this modern storage format. That’s already one more than the number of SATA ports some boards have. Here, it’s one less (M.2) slot, as you can attach up to six inch-scale storage devices to the Z690 Hero.

The ROG Hyper card allows mounting of M.2 SSDs up to 110 mm in length and has a heatsink for them with a hefty (almost half a kilo, the whole card weighs 515 grams) portion of aluminum. Of the three M.2 slots directly on the motherboard, two allow for mounting SSDs up to 80 mm and one (the first) up to 110 mm. By the way, the first PCI Express ×16 slot, connected to the north bridge of the chipset (in the processor) supports PCIe 5.0. This probably doesn’t surprise anyone with this board, but it’s worth mentioning for completeness.

Just as Asus didn’t skimp on material for the ROG Hyper card, they didn’t skimp on it for the CPU and iGPU power delivery heatsink either. The latter also has a decent weight (567 g) and for better heat dissipation, a heatpipe is also used to connect the two otherwise monolithic blocks into a single unit.

The more articulated surface of the heatsink should also be highlighted, thanks to which the cooler has a larger contact area with the air flow, which increases its efficiency. Increasing the cooling performance to the maximum is especially important here, because the power delivery is really massive and it would be a real shame if it was hampered by a weaker cooler. 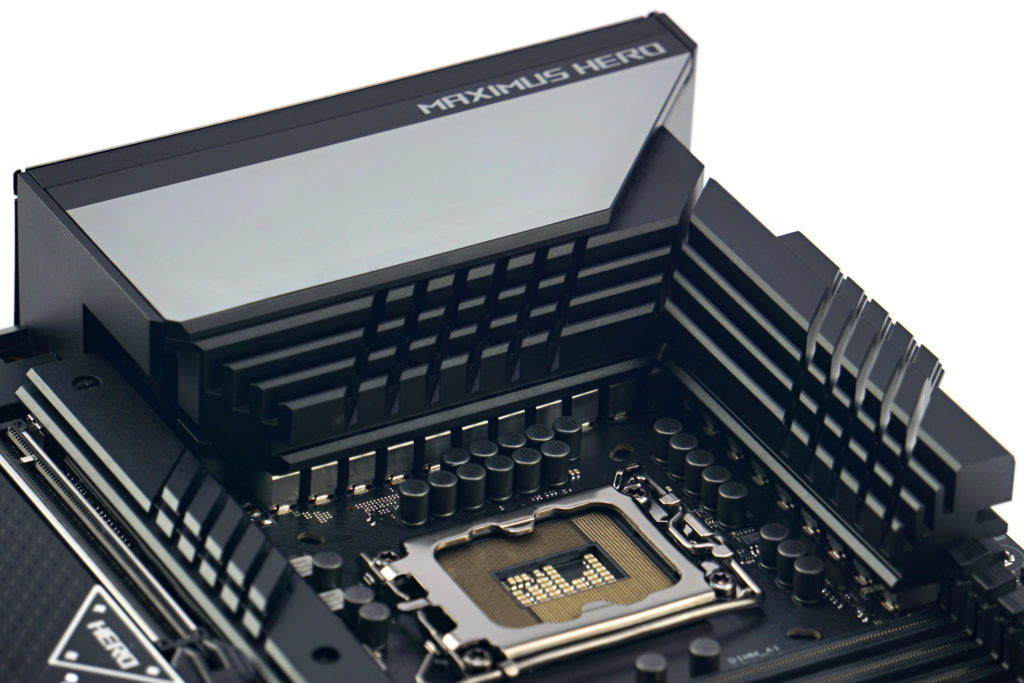 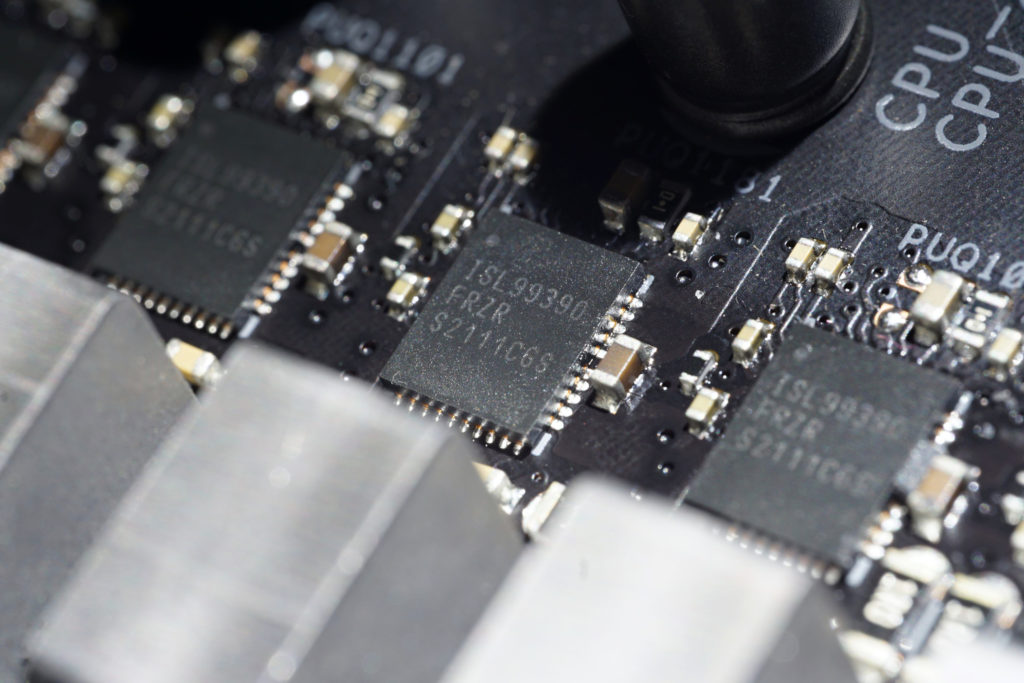 In total, the power delivery has 21 phases (20 for the CPU, one for the iGPU) with a maximum current load of 1890 A (1800 A for the CPU). Power draw of CPUs, even the most powerful ones after overclocking, is naturally significantly lower, but with a view to achieving the best possible effectiveness at the lowest possible temperature, such a robust solution makes sense. The voltage regulators used, by the way, are Renesas ISL99390, for which we also have technical documentation with a wiring diagram and detailed parameters.

To power the processor VRM, there is a pair of eight-pin connectors, which differ from many competing boards, even more expensive ones, with metal reinforcement. In terms of increasing the mechanical stress that typically occurs when handling and connecting connectors with, shall we say, varying user dexterity, such a measure has merit.

Like most of the more expensive boards, the Z690 Hero has a power button (so you don’t have to short-circuit the front panel with a screwdriver when experimenting outside the case), as well as a reset button (FlexKey). Then there’s one more small one among the buttons – ReTry, which tuners know well. This comes in handy when the board doesn’t POST after you change settings and you want to undo the failed choices after a reboot. 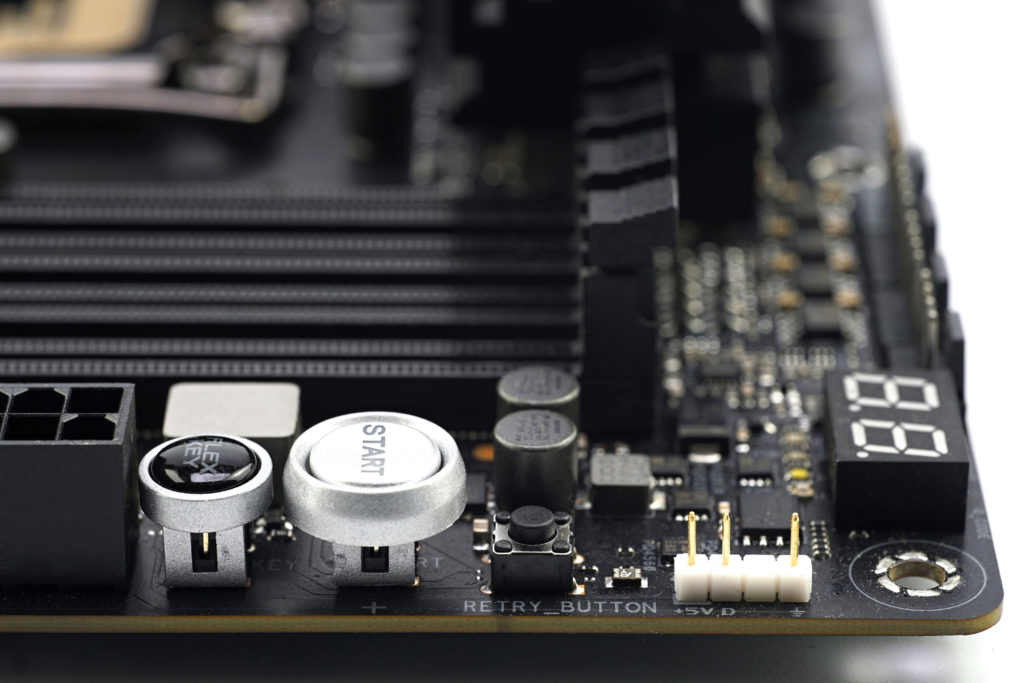 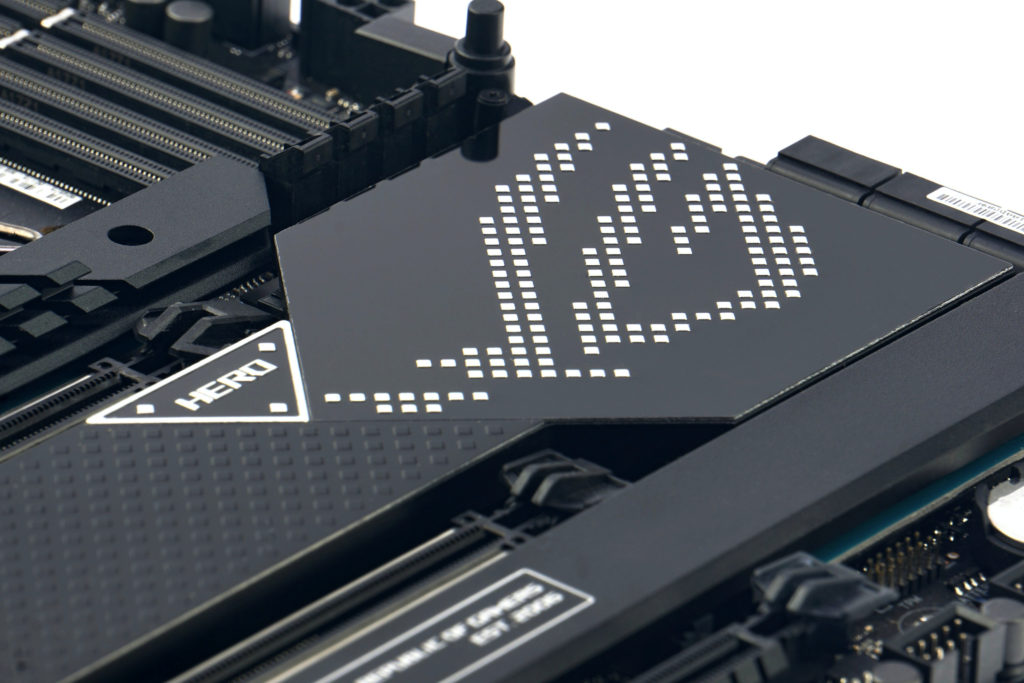 The rest of the features are otherwise, fairly ordinary. However, the thermal pads under the PCIe 4.0-enabled m.2 slots are worth praising. Through them, they transfer heat from the back of the SDD to a larger area of the motherboard, which has a lower temperature in these places in critical situations and thus acts as a heatsink. Aluminum heatsinks on top of the SSDs are present in all positions.

Then it is also worth pointing out the absence of short PCI Epxress ×1 slots (only three PCIe ×16 slots are available). There are plenty of fan connectors for a change (8), well spaced at the edges of the PCB. There are are also handy, refracted two USB 3.2 gen. 1 connectors and all SATA (III) ports. The sound chip is a Realtek ALC4082 with DAC, ESS ES9018Q2C network adapter, then a 2.5Gb Intel I225-V and what else have we forgotten? The WiFi radio frequency module (6E), which is included and there are connectors (SMA) on the rear panel for it to mount antennas (these are not missing among the accessories either).

We are already on the rear panel, where two of the three USB support Thuderbolt 4 (with 40 Gb/s), unlike the Apex boards, a monitor connection to the iGPU is also foreseen, and HDMI 2.1 is also among the connectors. Most of the external USB ports are in the 3.2 gen. 2 standard (7×). Double the speed (20 Gbps) – 3.2 gen. 2×2 – can only be pulled from the internal connector.

Continue: What it looks like in BIOS
Flattr this!
Asus základné dosky 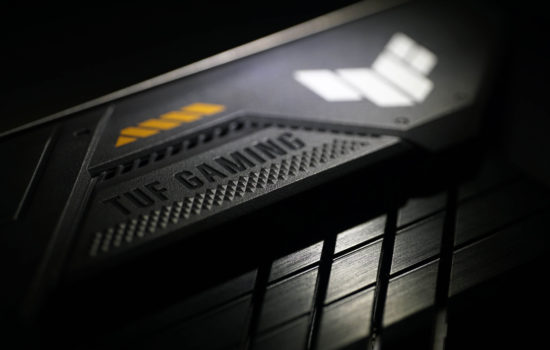 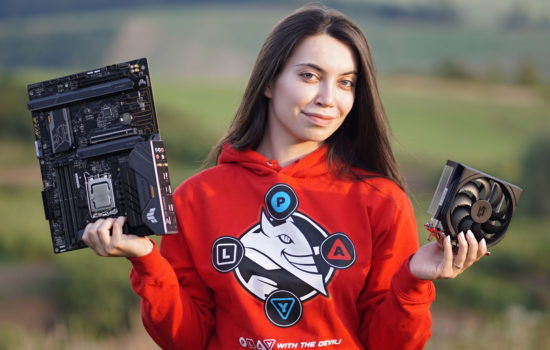 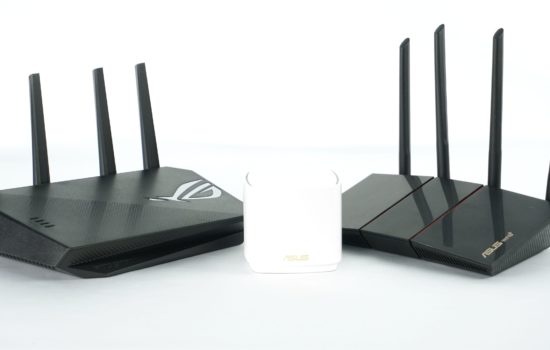