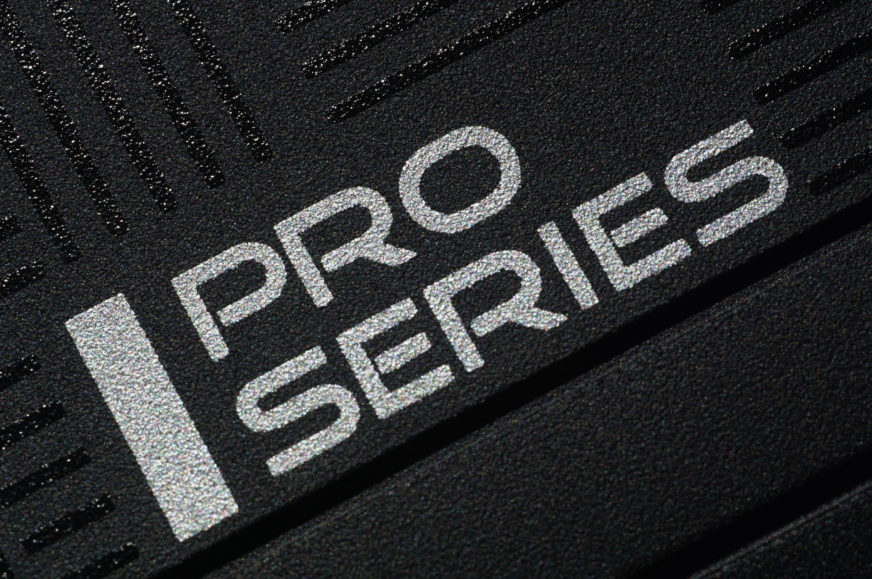 MSI’s second cheapest motherboard with the Intel Z690 chipset costs significantly less compared to the higher-end Tomahawk DDR4. The difference in features is small. And perhaps too small, as the specifications artificially downgrade some components. The power delivery is less efficient and the heatsinks are more modest, but the roughly 80 EUR saved is almost as much as the cost of upgrading from a Core i5-12600K to a Core i7-12700K(F).

Although we can never talk about Z690 boards as a completely cheap product, but at least they don’t make models that have undersized power delivery for “K” processors. This minimizes the risk of meeting a power-hungry processor with an inadequate motherboard. And while that manual overclocking capability is already the biggest advantage, it’s always good to maintain reasonable operating characteristics as well – whether it’s high efficiency or “healthy” temperatures. You’ll find out what kind of performance one of the cheapest Z690 boards – the Pro Z690-A DDR4 – will deliver in our 38-chapter analysis.

The “Pro” series of boards is offered by MSI under the MAG and MEG gaming series. More savings on the design is expected, but on the other hand, the price is lower. The MSRP, MSI’s recommended retail price, for the tested Pro Z690-A DDR4 is 239 EUR.
Realistically, however, the price in stores is even 20–30 euros lower, and of the MSI Z690 boards, only the Pro Z690-P DDR4 is cheaper. The latter, however, has very poor availability. 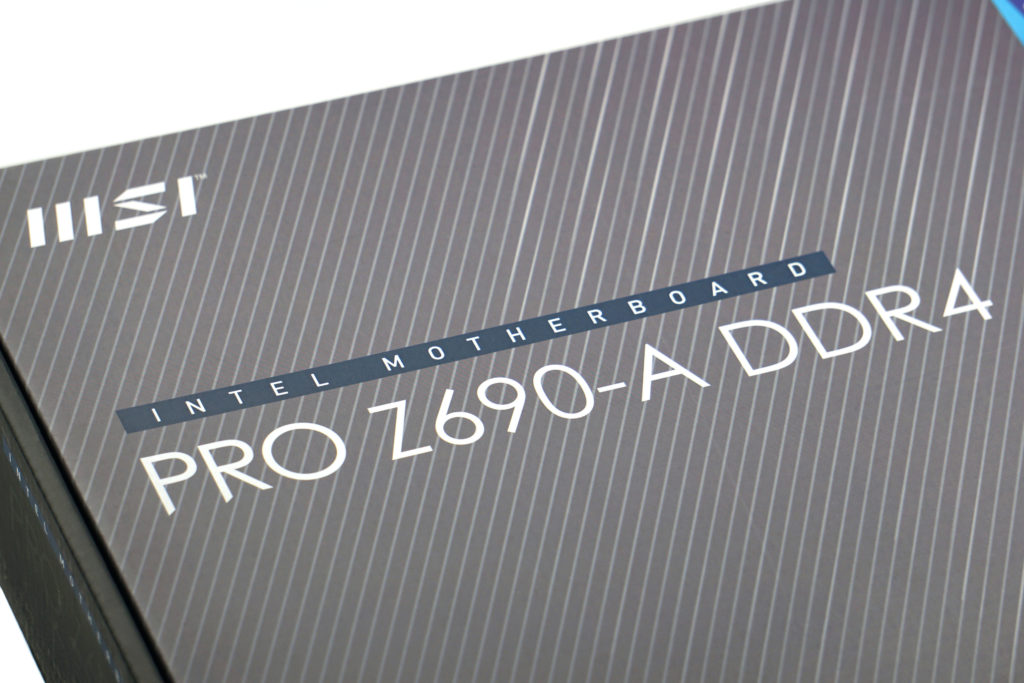 The Pro Z690-A DDR4’s form factor is ATX (305 × 244 mm). The usual PCB shapes are disturbed at the bottom right only by the cutout for the SATA ports. The intention is that the board does not cover part of the cabling grommet, thus improving handling. But in some cases the opposite effect can also occur. If the cable grommet will not interfere with the space under the connectors (and will be a few millimeters offset, because it counts with a traditional PCB), then it will not be possible to use a cable with a connector bent to a right angle.

The VRM heatsinks are pretty decent. Together they are 275 g (143 + 132 g) and there is an attempt to create some sort of fins in order to achieve a more rugged surface. There is only one SSD heatsink, although three of the four M.2 PCIe slots are four-lane, so they are ready for the most powerful controllers that this cooler would make sense to put on. Something had to be skimped on, though, and we don’t consider this to be a critical spot. Hybrid slots (i.e. in addition to PCIe also with SATA SSD support) are supported by only two slots (the third and fourth), the others are exclusively for PCIe (NVMe) SSDs.

The board has four PCI Express slots, three physical long ×16 (though only four lanes) to one short (×1), typically for a USB controller, network or sound card. And this last option may well be taken advantage of by the audio-savvy user. After all, the integrated sound adapter is just an outdated Realtek ALC897. 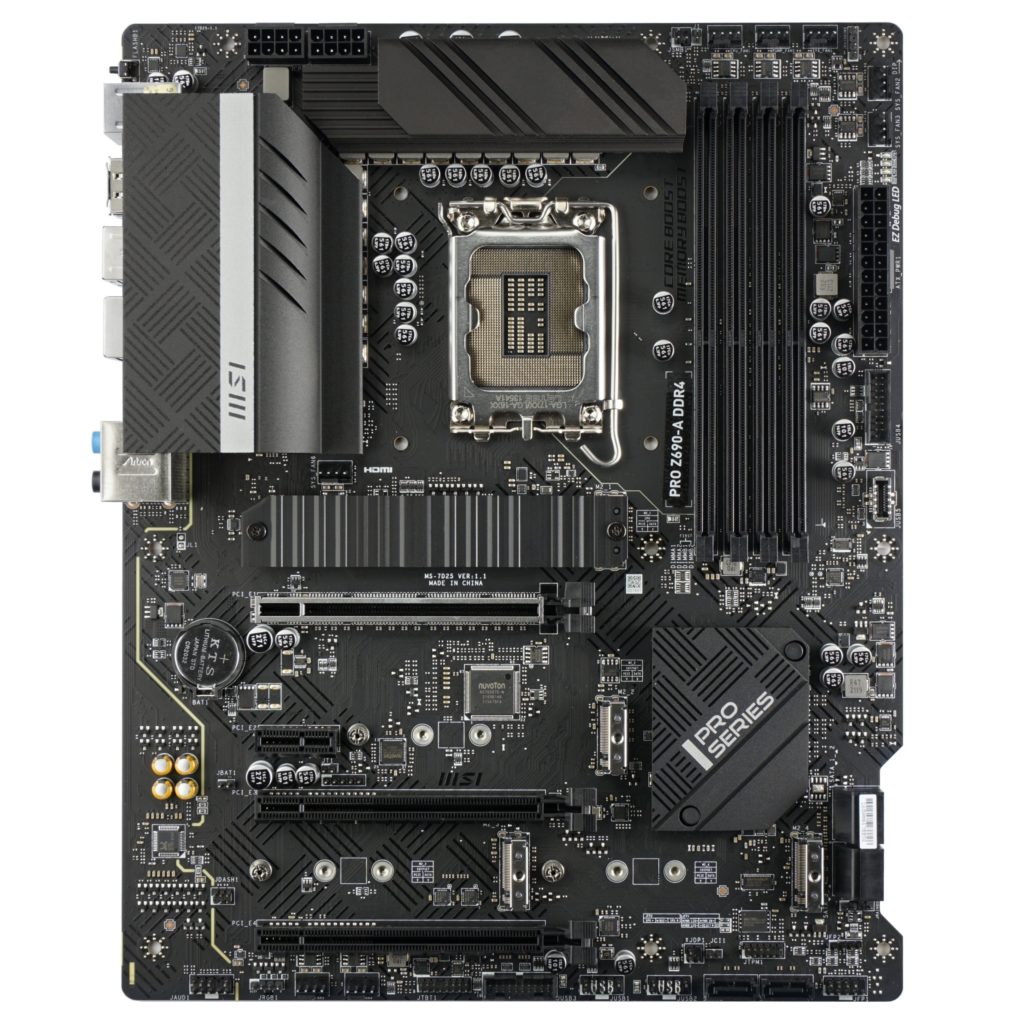 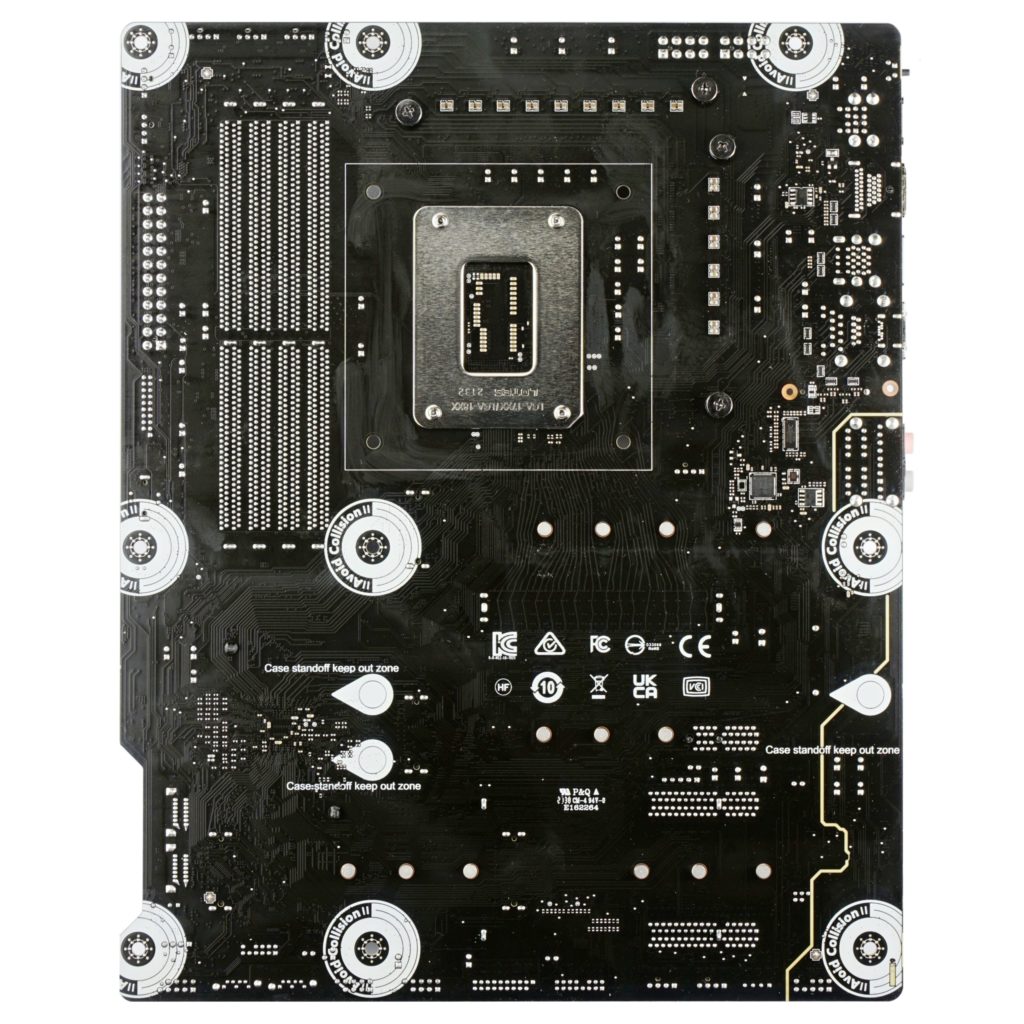 The first slot supports the PCIe 5.0 interface and it is naturally full-sized and to have a higher load capacity (for typically heavy graphics cards) it is held on the PCB not only by contacts, but also by metal anchors. The distance from its center to the processor socket is 91 mm. This is just enough so that even a wide tower-shaped cooler does not collide with the graphics card, although for more comfortable mounting (or rather demounting of the graphics card) it is usually 5 mm further on some boards (for example on TUF Gaming B660 Plus WiFi D4).

The external connectors do not have a fixed cover as nowadays most boards even in this lower class. It’s nice the old way – separately. However, another thing is noteworthy here. Namely, the USB port standards do not match the specifications. In this case it’s a good thing, because the USB ports that are listed in the specs as 3.2 gen. 1 are faster, with twice the bandwidth. So these are USB 3.2 gen. 2 ports, which officially there is only one (red) on the board, but unofficially there are three. The two blue ones deceive with the colour, and we can believe that it’s also on purpose. The reason for this is to make it more motivating for some users to pay extra for a more expensive board that has 10-gigabit USB 3.2 gen. 2 ports in these positions as well according to MSI’s materials. Higher transfer speeds do mean higher requirements for data wires, but in this case, compared to more expensive but schematically identical boards, it wouldn’t be worth dealing with some additional “cheaper” option in terms of manufacturing costs.

The power delivery for the CPU and iGPU is 14-phase. The voltage regulators used are Alpha & Omega Semiconductor with the designation on the housing AT00 1T15. Finding datasheets for some of this company’s parts is always more complicated and if you manage to find them, we will be glad if you add them to the discussion below the article. The PWM controller is a dual channel Richtek RT3628AE, we have the datasheet for that. The board uses two 8-pin connectors to supply power from the PSU. It is not necessary to have both of them plugged in, but in combination with a cheaper power supply with a smaller cross-section of wires and a powerful processor with a power draw of around 300 W, it is recommended. This will neatly reduce the temperature inside the connector, as it will increase the overall cross section of the active wires. 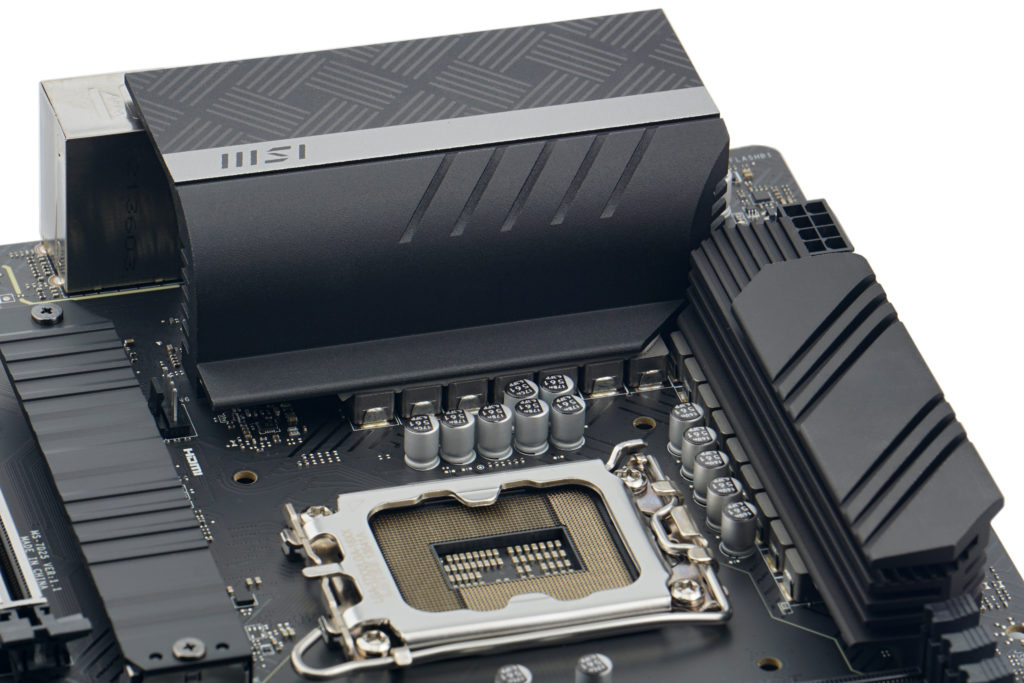 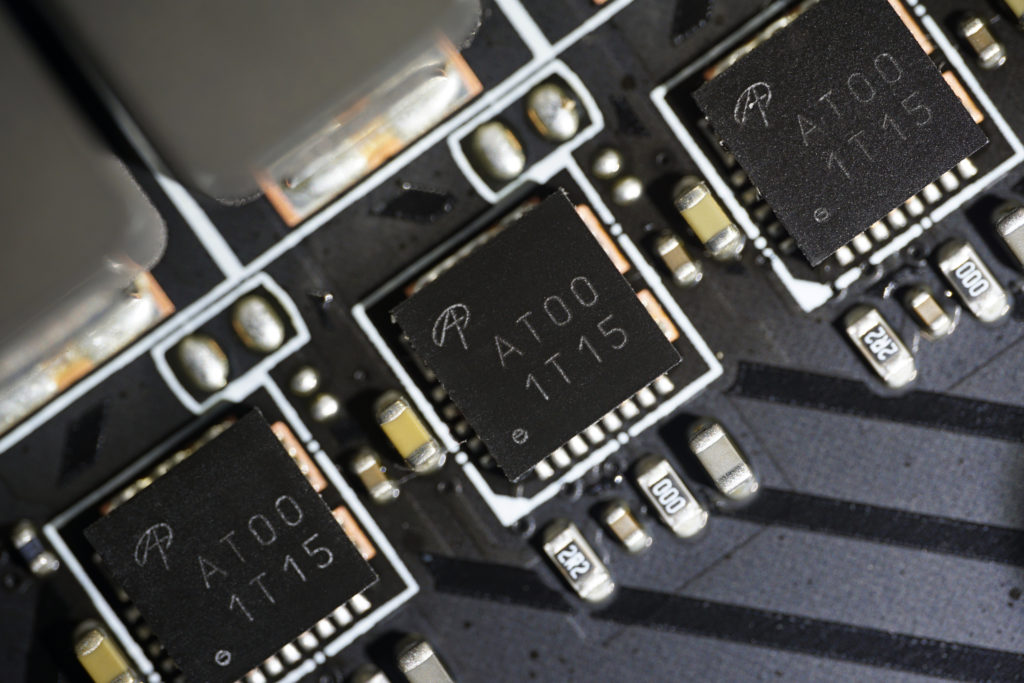 The internal connectors are placed practically at the edges of the board. Most of the connectors for fans or pumps are in the top right corner, so close to both the CPU cooler and the system fans at the intake of the case. Also worthy of praise, talking about internal connectors, is the routing of the two 19-pin connectors to the four USB 3.1 gen. 2 ports. Some boards only have one, which is limiting for a proper case with a premium connector setup. 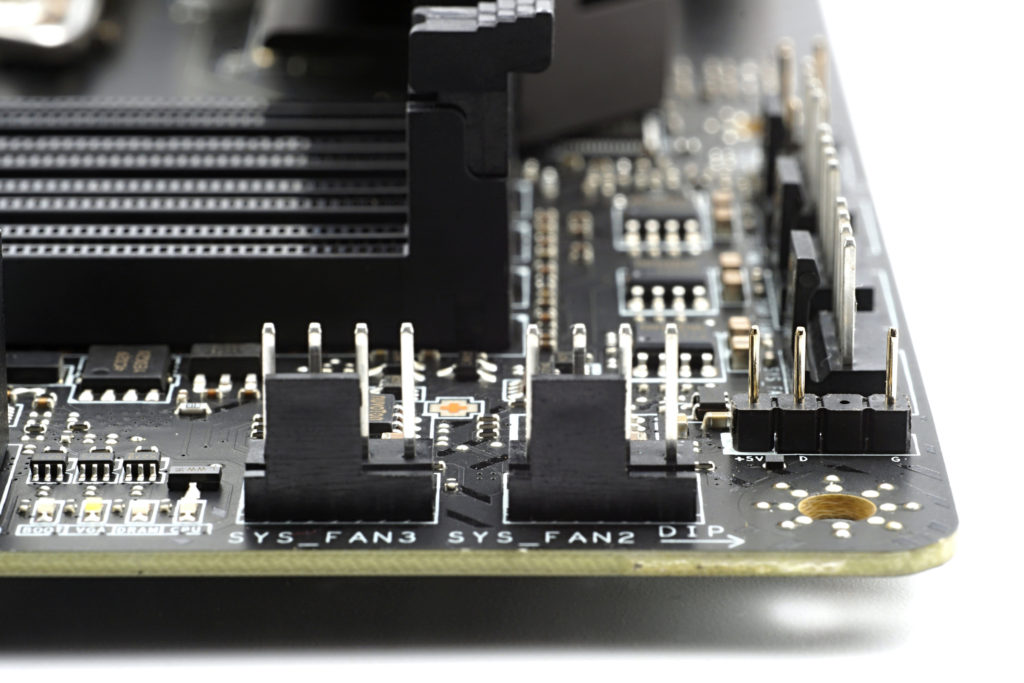 The board does not have illuminated RGB LED elements, but it does not lack connectors for lighting accessories. It has two 3-pin ARGB LED connectors for 5 V and one analog 4-pin (12 V) for backward compatibility with older devices.

Continue: What it looks like in the BIOS
Flattr this!
motherboard MSI základné dosky